Celia Dial Saxon (1857-1935) was an educator and activist known for her dedication to providing African Americans in Columbia, South Carolina with educational, cultural, and financial resources throughout her 55-year career as an educator. Formerly enslaved prior to emancipation, Celia Saxon eventually went on to become one of eight African American women graduates from the South Carolina State Normal School. She devoted her life to providing African Americans with proper resources, teaching numerous classes on African American history year-round, co-founding the Wilkinson Orphanage for African American children and Fairwold Industrial Home for African American girls, and eventually helping to establish the first branch of the Columbia Public Library available to black patrons, among others. Due to her sustained efforts in the community, the formerly all-white Blossom Street School of Columbia was reopened as an all-black institution and renamed the Celia Dial Saxon School in her honor. A historical marker commemorating Celia Dial Saxon's immense contributions to Columbia, South Carolina as well as Blossom School was placed on 1000 Blossom Street in 2008.

The front of the historical marker. 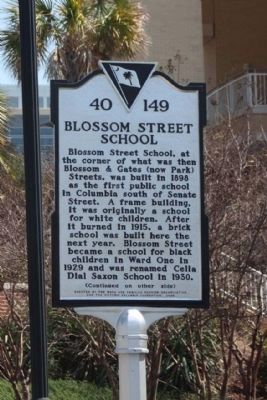 The back of the historical marker. 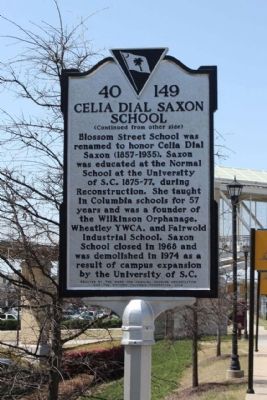 Celia Dial Saxon (1857-1935) was born in Columbia, South Carolina on October 1st, 1857. Prior to the Emancipation Proclamation of 1863, Celia was enslaved. After she was freed, Saxon (Dial at the time) attended Howard School, which was founded by the Freedman's Bureau in 1865 to educate newly freed African American children. In 1877, Dial was one of eight women graduates from the South Carolina State Normal School, which was the first college in S.C. to provide a college education to African American women. Dial started her lifelong teaching career shortly after she graduated, returning to Howard School to teach geography, history, and civics. In 1890, she married Thomas A. Saxon, a professor at Allen University, who she had two daughters with. By 1920, she became a member of the faculty at Booker T. Washington School, where she taught classes on African American history. Her devotion to education was extensive, as she taught history and geography over summers at Benedict College and South Carolina State College to African American students and served as the treasurer of the Palmetto State Teachers' Association for a number of years.

Saxon devoted much of her time to benefiting Columbia's community and minority populations, co-founding the South Carolina Federation of Colored Women's Clubs, which focused on housing orphaned African American women and teaching them basic skills, and helped to found the Wilkinson Orphanage for Negro Children. She also served as the African American chairwoman of the interracial committee for a branch of the Young Women's Christian Association (YWCA), eventually helping to establish the first branch of the Columbia Public Library available to black patrons and serving as one of the founders of the Fairwold Industrial Home for Negro Girls. Due to her efforts devoted to reforming the education system and providing crucial services to African Americans, the formerly all-white Blossom Street Elementary School was renamed the Celia D. Saxon Elementary School and opened as all-black institution in her honor. Blossom Street School had its own rich history prior to its new name assignment, as it was established as the first public school in Columbia south of Senate Street in 1898. The Saxon school eventually closed in 1968 and was demolished in 1964 due to campus expansion of the University of South Carolina.

By the time Saxon passed away at her home on January 29th, 1935, she had taught in Columbia schools for 57 years. Even up to the day before her death, Celia graded papers and taught classes. Due to her immense contributions to allowing African Americans to gain access to educational, cultural, and financial resources in South Carolina, Saxon has remained an important figure in the state's history since her death. In 1952, the Columbia Housing Authority named a segregated, low-income public housing project in her honor. Although Saxon Homes is no longer in use, the Columbia Housing Authority renamed the former housing project's neighborhood in her honor. A historical marker honoring Celia's contributions to African American life in Columbia, South Carolina as well as Blossom Street School was placed on Blossom Street in 2008 by the Ward One Families Reunion Organization and the Historic Columbia Foundation.