Herman B. Wells: Fighter for The Integration of Indiana University Baseball

Herman B. Wells was the President of Indiana University from 1937 to 1962. During his Presidential term at IU, Wells was well known for advocating in favor of the integration of the campus and it’s sports teams. The IU baseball team was at the center of controversy during the late 1950s when Wells decided to send Eddie Whitehead, an African American ballplayer, with the team on a spring tour to Florida, where segregational tensions were still very high. Wells received many hateful letters as a result of this decision. The following images are some letters from the public who opposed his decision to integrate as well as his response letters. These archived images demonstrated how Wells conducted all his responses to segregationists in his pursuit of integrating the IU baseball team and the university’s athletics overall.

This letter to Herman B. Wells is another example of the backlash that Wells received from activists for the decision to send Eddie Whitehead on the 1956 spring baseball teams tour of the south. We can see that racial tensions were very high and Wells was the target of many segregationists. We also see the values and beliefs of some very nasty individuals through observing these types of letters received by Wells. 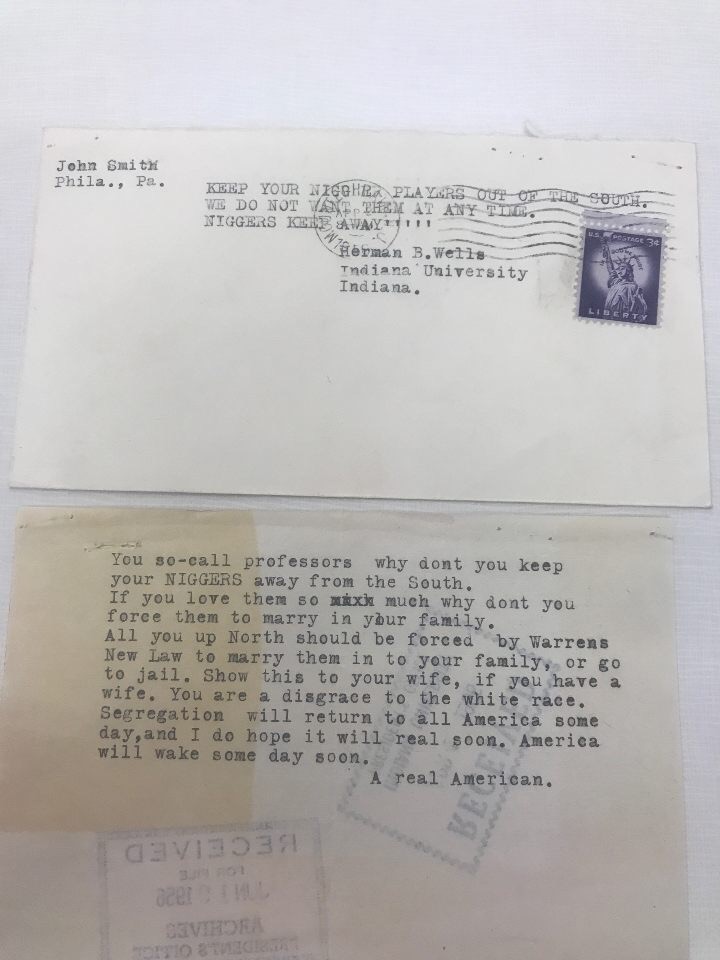 Wells received so many extremely racially charged and threat filled letters that he developed a response letter template which he would use to respond. As you can see, the only thing that would change in his responses was the name of whom the letters were sent to. Wells was a very proactive person who believed in the importance of responding to all who mailed him. If he were to receive a letter from someone, there was a good chance he would respond in some way or another. 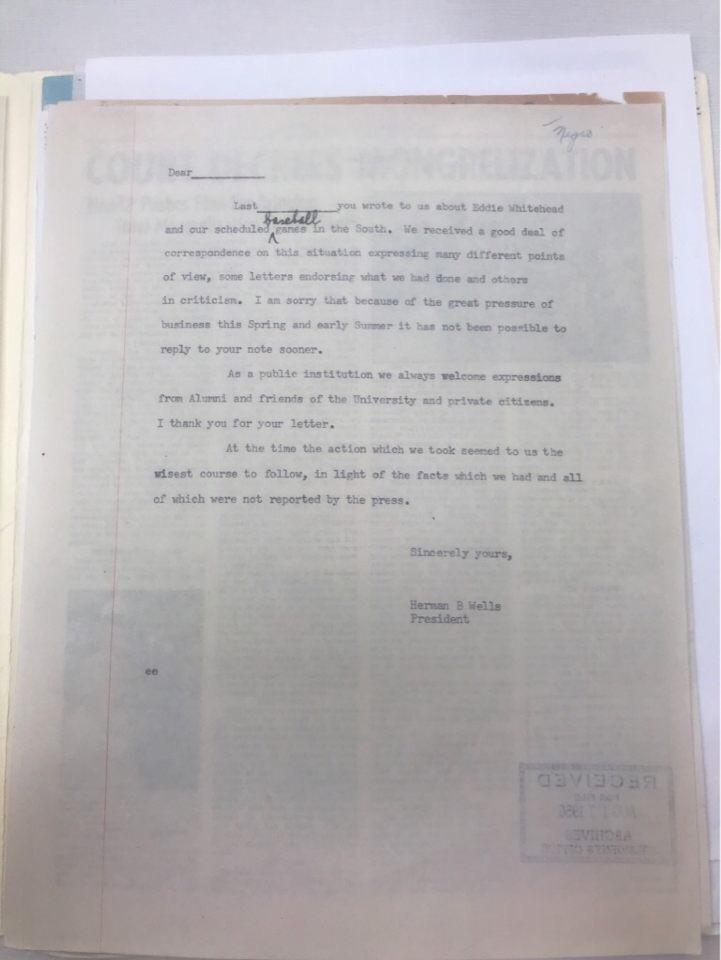 This photo is of a letter from George Wallace to Herman B. Wells. It shows how Wells was targeted for his integration of the Indiana University baseball team. This letter was sent after Wallace learned of Wells’s strong comments condemning the south for the treatment of Whitehead while on the baseball spring break trip. George Wallace was a very notoriously known segregationist during the 1950s and was not happy with the negative depiction of the south illustrated by Wells’s statements in the papers. It is important to see the negative backlash which he had to deal with from individuals such as George Wallace. 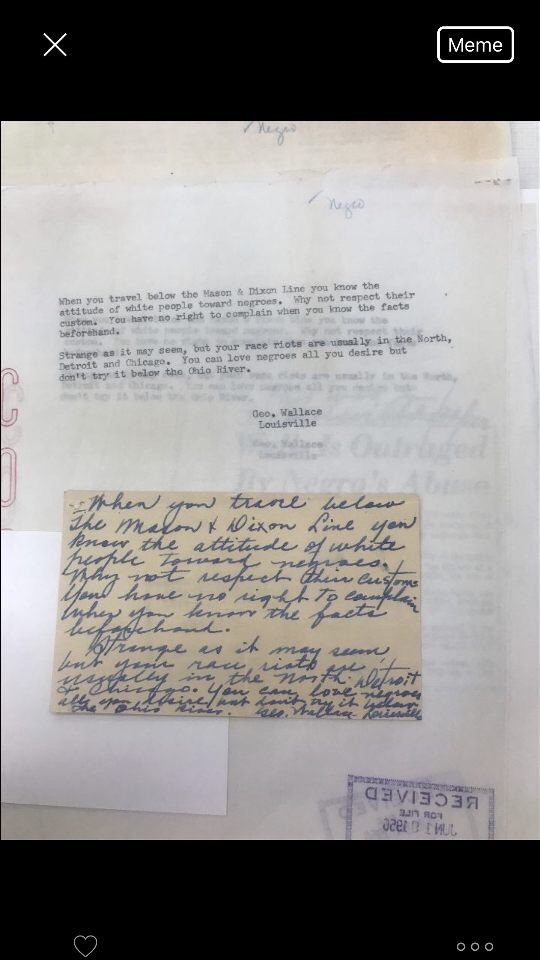 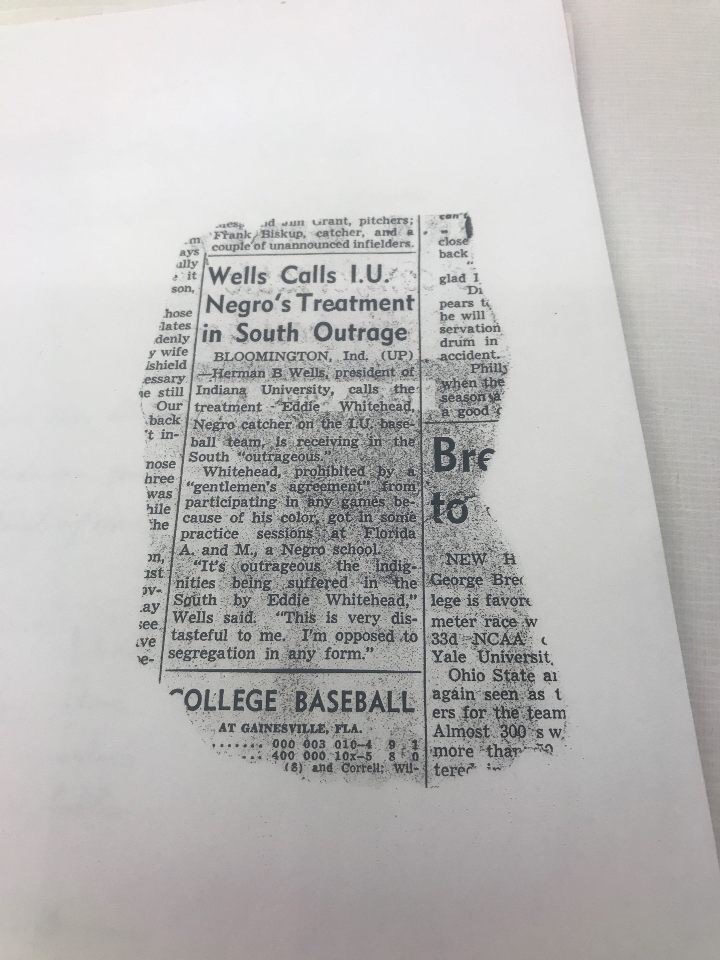 On May 17, 1954, The Supreme Court declared in Brown v. The Board of Education that all laws establishing segregated schools to be unconstitutional, and it called for the desegregation of all schools throughout the nation. Herman B. Wells, who was a life-long advocate for integration, began making plans for Indiana University to integrate its athletic teams almost immediately. IU as an institution was already integrated academically, but many collegiate athletic leagues did not allow non-white players to compete. IU introduced Eddie Whitehead as its first black athlete to the baseball team as a full roster member in 1956. However, just because IU had chosen to integrate its baseball team did not mean that all other universities were doing the same. Many of the southern states were not happy with the Supreme Court’s ruling and were attempting to find other ways to keep their schools segregated through intimidation tactics and boycotts. IU’s baseball team had a long-standing commitment to playing at a southern baseball tournament in Florida against a few southern schools who would not allow black players to play for fear it would upset state politicians.

Wells was faced with a tough decision unique to the time period of newly implemented integration. Wells could choose to either support his athletic department’s integration and send Whitehead on the trip with the team or pull him from the trip and keep him off the roster for the games played on the trip. Wells did not want to break his university’s scheduled agreement with the southern schools and cancel the trip entirely out of protest. In the end, Wells compromised with both sides and demanded Whitehead accompany the team on the trip but conceded to a “gentlemen’s agreement” that Whitehead would not participate in any of the scheduled games played in the south. This neutral decision raised criticism from both integrationist and segregationist supporters as it felt Wells did not act accordingly with the views of either side.

When Wells made the decision to send Eddie Whitehead on the 1956 baseball team's spring tour through the south, he was met with many threats and humiliation attempts by southern segregationists. Even the words of George Wallace, a notorious southern segregationist politician and former Governor of Alabama were not enough to scare Wells from doing what he set out to accomplish. Wells was making a statement on behalf of Indiana University with his actions. When observing the context of these threatening and hateful letters that Wells received, we get a true grasp on the racial tensions which Wells was forced to combat. In John Smith’s letter to Wells, Smith states; “You are a disgrace to the white race. Segregation will return to all America one day, and I do hope it will be real soon”. George Wallace, as previously stated, also held very segregational beliefs. Years after his letter to Wells concerning Eddie Whitehead, Wallace is quoted in his 1963 Inaugural Address; “Segregation now, segregation tomorrow, segregation forever.” This goes to show the deep and dark views held by some southern people, and explain how they felt Well’s rapid integration was a threat to their “southern customs”.

Wells’s decision to proceed with the trip sparked a hostile reaction from many others as well, including members of the southern public who interacted with Whitehead on his trip. Reports in the Indianapolis Times and the Louisville times write of Wells “outrage” at the southern community for Whitehead’s treatment during the trip. Following these public comments condemning the treatment of his player, Wells enacted a temporary ban on all athletic competitions scheduled with schools that discriminated against black students. This extreme measure is reflective of his student-led boycott in 1950 to integrate local Bloomington restaurants. Strong responses like these were why Herman B Wells was known as a leader in the Integration of Universities across America.