The Pullman Interstate 101 Car is located on the grounds of the Southwest Virginia History Museum in Big Stone Gap, Virginia. The 101 Car likely dates to 1870, and it spent the next seventy years serving railroad executives for the Southern, and then Interstate, Railroad systems. Prior to its arrival at the Southwest Virginia History Museum, it served as a hunting cabin and then Big Stone Gap’s visitor’s center. Future plans for the car include refurbishment, opening the car to public tours, and using it as a tool for interactive learning. 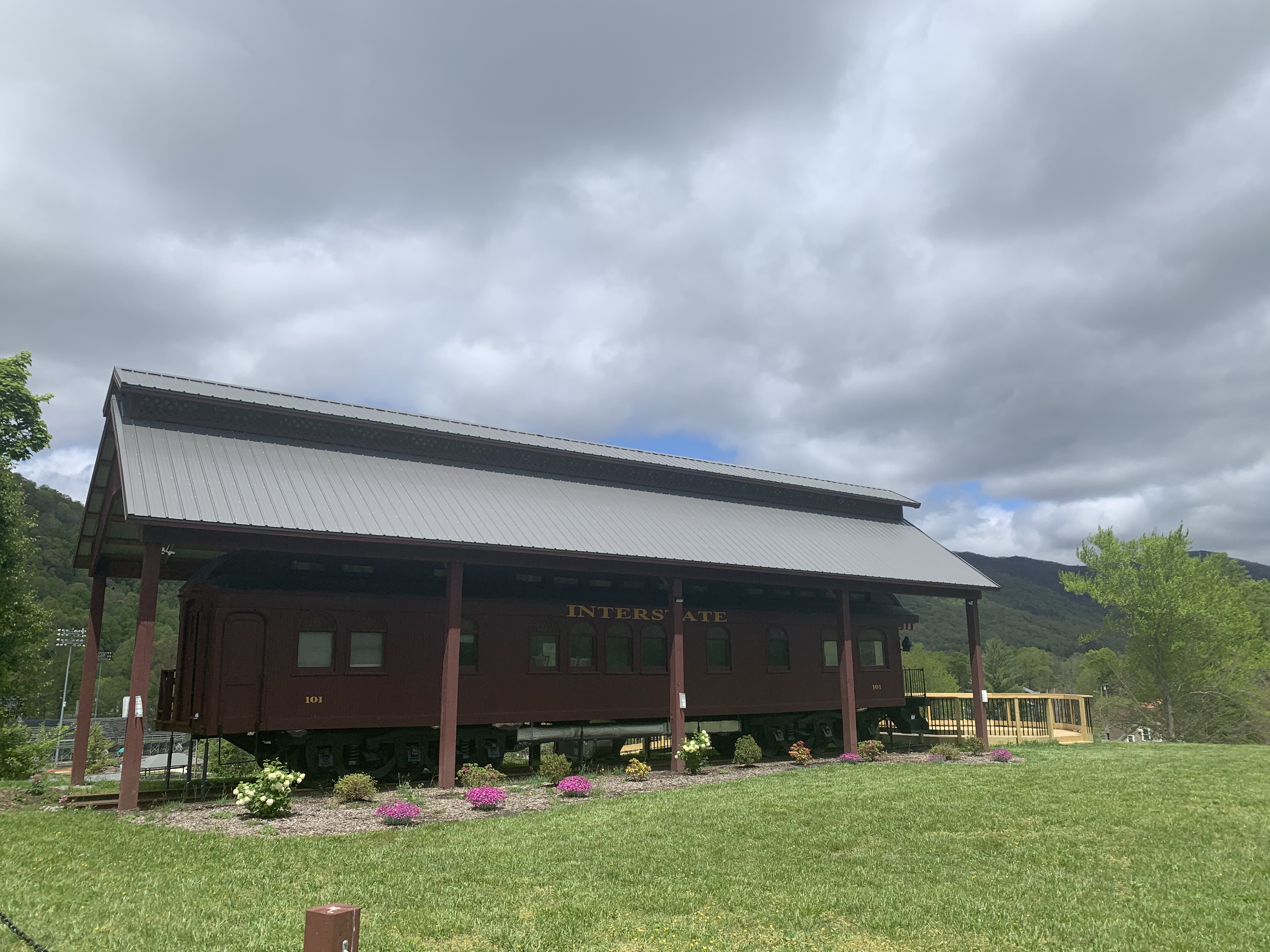 Although “Pullman” may be a relatively unfamiliar name now, one hundred years ago people would have associated it with luxurious travel. That was during the height of the railroad era. George Pullman got his start as a cabinet-maker and “house mover” in Chicago, according to Smithsonian Magazine, but he discovered a need for comfortable sleeping accommodations on trains. After developing several prototypes for sleeper cars, Pullman received a boost when one of his car designs became the vehicle for carrying President Abraham Lincoln’s body on the funeral train following his assassination. Demand skyrocketed for Pullman’s cars, and he subsequently became one of the premiere industrialists of the Gilded Age.

Pullman sleeper cars, like the 101 Car here at the Museum, were the epitome of luxury. Only accessible by the well-to-do, they had plush fabrics, carved wood interiors, stained glass windows, and brass fixtures. Their clientele, typically middle-to-upper class passengers, contrasted the labor force who made the cars operable. In an era known for stark racism and Jim Crow segregation, Pullman hired African Americans as porters. He, like other wealthy industrialists of his age, however, tolerated no dissent from his labor force. While associated with wealth, his name also became attached to the massive labor strike that his workers initiated when he refused to raise wages to help them make rent in his company town. The strike occurred in the wake of the 1893 economic depression. A Pullman car also became the proving ground for the legal contest over segregation that led to the notorious 1896 Plessy v. Ferguson Supreme Court ruling, which encoded Jim Crow in the nation’s legal system for the next sixty years.

Pullman 101 took on a new life in the 1950s. Josh Taggart, owner of the Wise Coal and Coke Company, acquired the rail car to use as a hunting cabin in 1957. Thirty years later, a coal company called Humphries Enterprises purchased the 101 car and donated it to The Gap Corporation, a non-profit organization devoted to local economic development. The non-profit refurbished the car and put it to new use as the Town of Big Stone Gap’s visitor center.

The Pullman 101 Car symbolizes the centrality of the coal and rail industries to the development of this region. It also reflects more recent efforts to encourage the growth of the tourism industry in Southwest Virginia. Big Stone Gap in particular has a growing tourist appeal. The Pullman 101 Car’s future plans to be opened as a tourist and information site only adds to this appeal.

The 101 Car is, in many ways, a symbol of the dynamic forces that shaped the industrial development, and economic transitions, of Big Stone Gap. It serves as a reminder that this is a town with a rich and multifaceted history, a history that has been shaped by events that occurred both locally and far beyond the borders of the town.

Created by Zoe Crihfield (Instructed by Jinny Turman, University of Virginia's College at Wise) on May 1st 2020, 9:55:01 pm.