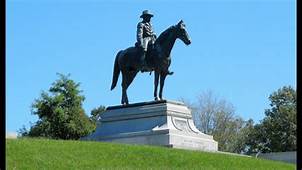 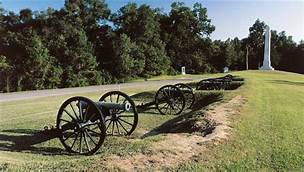 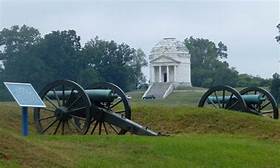 During the Civil war the Confederate held Vicksburg, was an important strategic city along the Mississippi river. The city was crucial to the transport of supplies. The Union forces knew that if Vicksburg could be taken, then the South would be cut in two, and its supply routes would be blocked.

President Lincoln stated "See what a lot of land these fellows hold, of which Vicksburg is the key! The war can never be brought to a close until that key is in our pocket...We can take all the northern ports of the Confederacy, and they can defy us from Vicksburg.

General Ulysses S. Grant started his march toward Vicksburg in the spring of 1863. What followed was a series of battles slowly approaching the city over a period of months. The Campaign of Vicksburg included the battles of,

After two failed attempts to take the city on May 19th and 22nd, and the loss of 4000 men, Grant decided to lay siege to the city. The siege lasted from the end of May until July 3rd when Confederate General John C. Pemberton requested a meeting with General Grant to discuss terms for surrender. Although the initial meeting did not result in any agreement, the final terms were agreed upon that evening and Pemberton officially surrendered on July 4th 1863.

The Vicksburg National Military Park is an expansive complex of memorials. The site contains the USS Cairo Gunboat Museum. The Cairo was an Ironclad Gunboat. It was an early steam ship with metal armor and thirteen cannons. The USS Cairo Captained by Union Lt. Commander Thomas O. Selfridge, was sunk on December 12, 1862 by an underwater mine. The Cairo was recovered and restored in 1965. The park is also home to the Vicksburg National Cemetery. The cemetery has 18,244 interments with 12,954 unidentified.

There among the many monuments in the park is the African-American Monument. This bronze monument honors the African-American soldiers that fought in the American Civil war. The monument consists of three bronze figures on a base of black African granite with two black Union soldiers, and a common field hand. The statue displays the field hand and one solder support the second soldier between them, who is wounded and represents the sacrifice in blood made by black soldiers on the field of battle during the Civil War. The field hand has the meaning of looking behind at a past of slavery, while the first solder is representing a gaze toward a future of freedom that is secured by force of arms on the field of battle. According to the National Park service site, over 178,000 African-American soldiers fought for the Union army and over 18,000 were in the navy. The Confederate Armies would rely heavily upon slave-labor for infrastructure projects, such as constructing earthworks, fortifications, and other support functions. The campaign, siege, and defense of Vicksburg provides two of the earliest moments in history of African American soldiers serving in combat. At Port Hudson in May of 1863, and then again at Milliken's Bend in June.