At the beginning of the tour, we shall see Historic Notre Dame Stadium. It is one of the oldest stadiums in the country that has been continually used. It was opened in 1930 and has seen some of the best football the state of Indiana has had to offer for nearly 100 years. 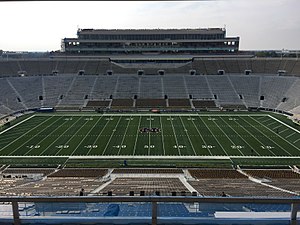 1930s to the success of recent Notre Dame football teams, Notre Dame Stadium has encapsulated the hearts of much of Indiana. In a region of Northern Indiana that was only sparsely inhabited when Notre Dame was founded, the university has helped sustain growth in the region largely impacted by the tourism surrounded by Notre Dame Football. As for the history of the stadium itself according to the Fighting Irish Football website,” Originally designed by Osborn Engineering Company – the same firm that designed Comiskey Park in Chicago and New York’s Yankee Stadium and Polo Grounds – the total cost of construction exceeded $750,000 and it was patterned on a smaller scale after the University of Michigan’s stadium. The 1996 season was the final one played with the customary 59,075 fans at Notre Dame Stadium. A $50-million expansion adding over 21,000 seats was completed before the 1997 kickoff, bringing capacity to its present-day 80,795.” (Notre Dame)

Created by Samuel Vermilion (Instructed by eric sandweiss, Indiana University--Bloomington) on May 4th 2020, 11:18:43 am.