Forks of Cheat Baptist Church is the oldest Christian congregation west of the Allegheny Mountains. The church was founded on November 7th, 1775, which means the congregation predates even the existence of the United States. The church has always had a named pastor, but was also serviced by circuit riders in its earliest days. The first simple log structure built as a place of worship was burned to the ground by Native Americans near the turn of the nineteenth century and replaced with a similar building in 1803. The current church was constructed in the middle of the twentieth century. In addition to religious history, the Forks of Cheat Cemetery was also the site of black market liquor distribution during prohibition. Thanks in large part of Reverend William C. Gluck, Forks of Cheat Baptist Church continues to celebrate its history with events like Homecoming Sunday, where the British flag is flown to celebrate the congregation’s colonial roots, and the annual picnic, where bear meat is included as a dish to commemorate its place in the pioneer diet. 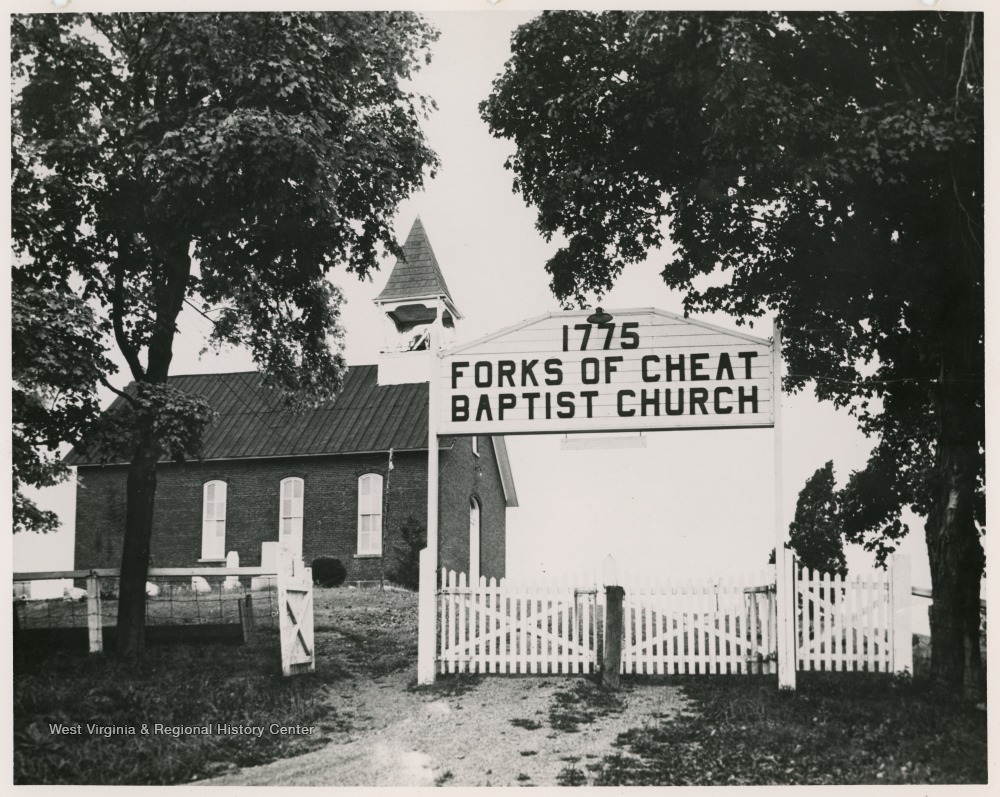 "The Baptist Church at the Forks of Cheat" Plaque 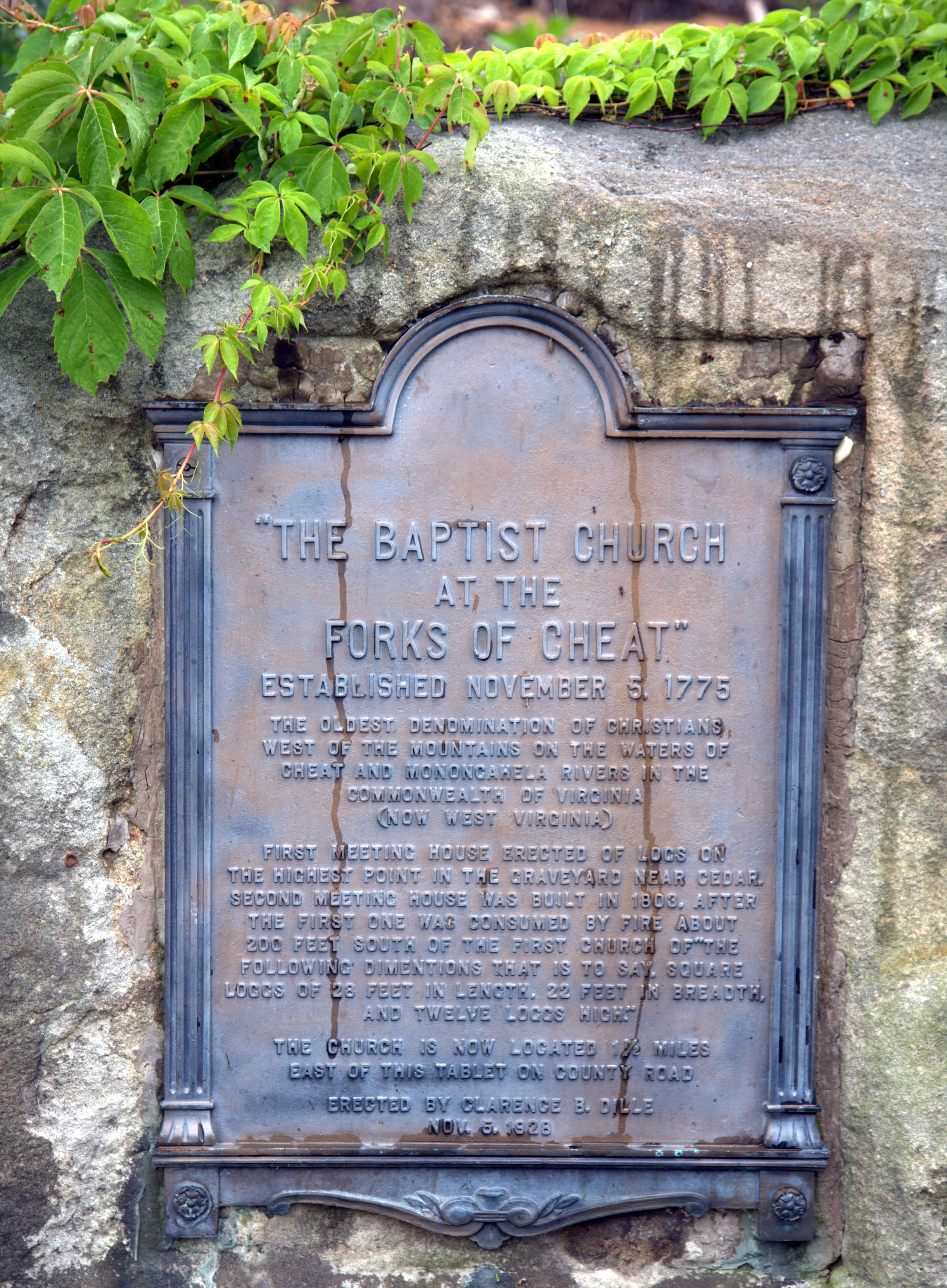 This model of the original Forks of Cheat Church was built in the early twentieth century as an educational resource. 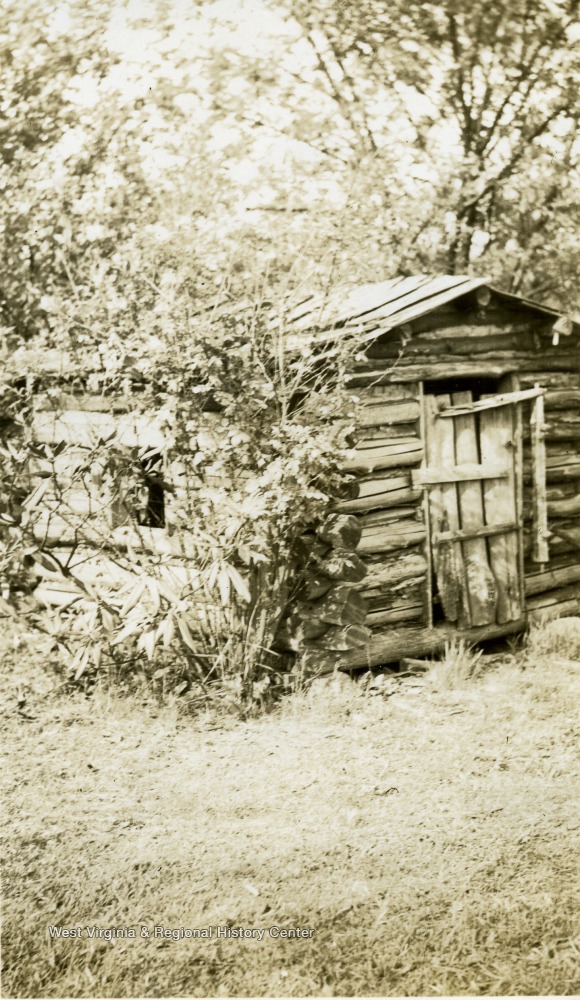 This photo shows the site of the first church — the newer buildings were both constructed about two hundred feet away. 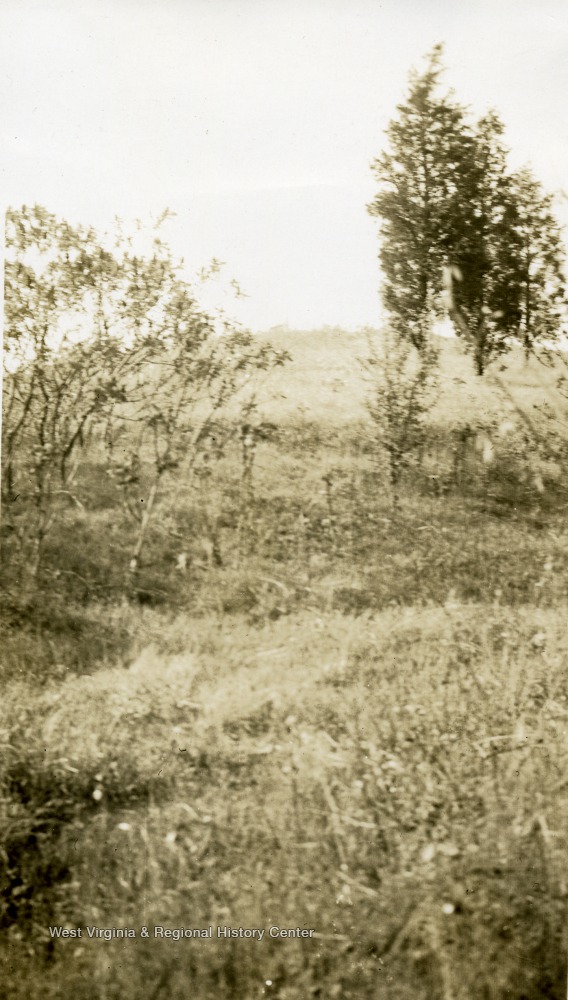 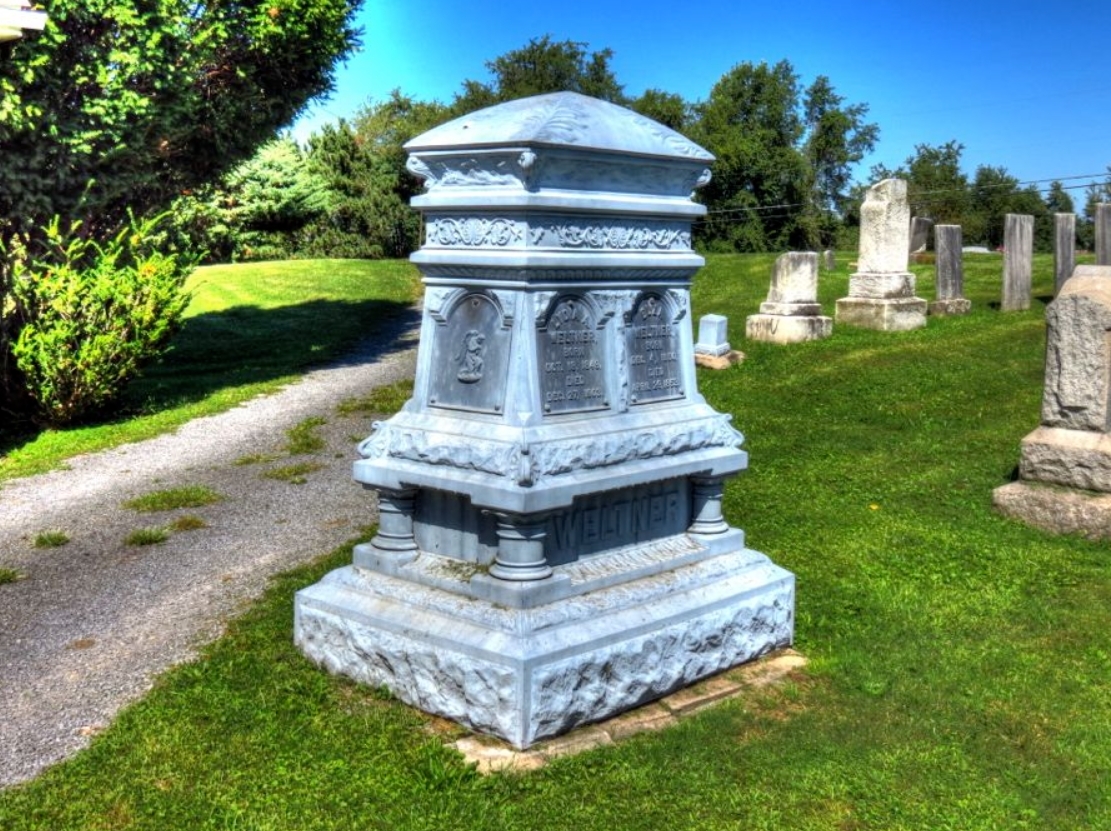 The George M. Weltner plaque can be moved to reveal the hollow tombstone interior. 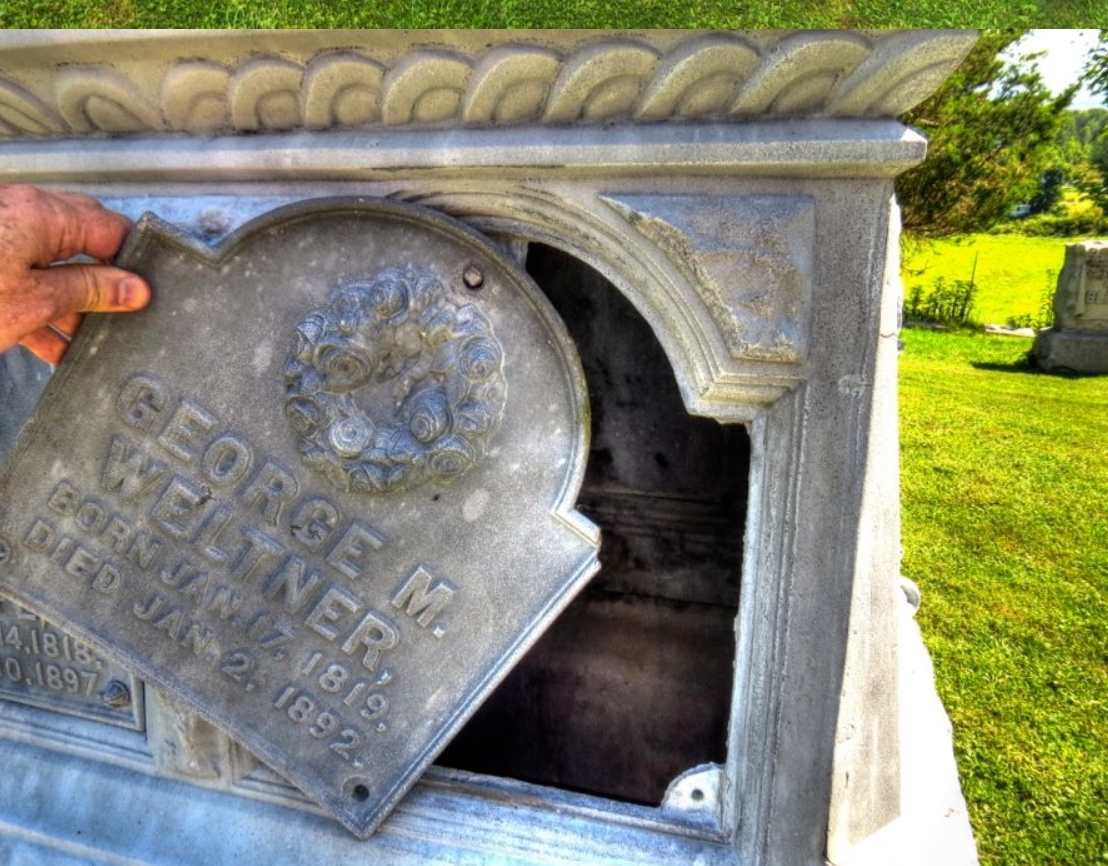 On the night of November 7th, 1775, twelve people gathered near Stewartstown, West Virginia. Samuel Lewellen, John McFarland, Thomas Mills, Joseph Boltinghouse, Hannah Lewellen, Susannah Mc Farland, Martha Mills, Catherine Evans, Elizabeth Jackson, William John, and John Corbly are all listed in a record book as present at the meeting. The group’s purpose was to establish a Christian church which became the first Virginian congregation west of the Allegheny mountains. Members came from a variety of backgrounds and denominations. Samuel Lewellen likely organized the meeting. He operated the Line Ferry, the westernmost crossing point of the Cheat River. Lewellen was named church elder at the meeting. John McFarland, a local farmer, was named the church’s first deacon. Finally, John Corbly served the important role as pastor. Because members of the congregation came from Presbyterian, Methodist, and Baptist backgrounds, the King James Bible was chosen as the official text for the church. Though practically non-denominational, the first iteration of the church was officially Baptist.

The new congregation was christened the Forks of Cheat Baptist Church for its location near the Forks of Cheat, a wide spot of the Cheat River. The first church building was constructed on a slight rise near Stewartstown, WV. The building was a modest utilitarian affair. “It was built of square loggs [sic] of 28 feet in length, 28 feet in breadth, and 12 loggs [sic] high.”[1] The structure would have appeared more as a log cabin than as a ecumenical site. A small Baptist cemetery near the church has burials dating to before the church’s founding, indicating that religious practices were informally executed even before the presence of an official congregation. The Forks of Cheat members assumed care of the cemetery and many of them were buried there.

John Corbly continued to serve as pastor until 1888. After he stepped down from the position, a lineage of official pastors began. However, the church was also serviced by travelling preachers often known as circuit riders. These clergymen moved throughout an area on a relatively regular schedule. In the earliest days, the circuit riders might have visited Forks of Cheat less than once a year, making their sermons a major event. As the population of western Virginia began to expand in the nineteenth century, visits accordingly became more frequent. One of the artifacts kept by Forks of Cheat Church is a small hourglass purported to have been used to time particularly loquacious preachers. Circuit riders continued to service Forks of Cheat until the church encountered a major setback near the turn of the nineteenth century, when Native Americans burned the original church structure to the ground. A new building was completed in 1803 near the original site, though there is no historical record of the appearance of this church.

Perhaps unbeknownst to congregation members — or perhaps with their full support — Forks of Cheat was the site of bootleg alcohol exchange during Prohibition. Due to the banning of making and consuming alcohol from 1920 to 1933, many people turned to illicit means to acquire the drink. The hollow Weltner family tombstone in Forks of Cheat’s cemetery served as the intermediary between distillers and consumers. The consumer would place their money in the tombstone, return a few hours later, and find it replaced with Monongahela Rye. Monongahela Rye was a world famous whiskey known for its bold flavor profile. The drink is even referenced in Herman Melville’s novel, Moby Dick. Though known as the iconic liquor of the area, public tastes for Monongahela Rye dried up after Prohibition ended and locals stopped producing it.

The current church building was constructed in the middle of the twentieth century and replaced the 1803 church. The relatively small community continues to celebrate their historic roots. Reverend Joseph C. Gluck, a West Virginia University professor and pastor for the congregation was particularly instrumental in establishing many of the church’s traditions. One of these traditions is the annual Homecoming Sunday, where the church flies a British flag to mark the congregation’s original colonial status. Another Gluck tradition is the annual picnic where bear meat, a pioneer diet staple, is served. Gluck also helped preserve several artifacts held by the church, such as a silver communion pitcher and cups from 1840. Approximately 1.5 miles west of the church, a 1928 plaque marks the original location of the church at the corner of Point Marion Road and Stewartstown Road.