St. Mary's Seminary Chapel was built from 1806 through 1808 by French architect J. Maximilian M. Godefroy for the French Sulpician priests of St. Mary's Seminary. The French-born architect Maximilian Godefroy (1765-c.1840) designed the chapel. Godefroy spent 14 years in the United States (1805-1819) after being exiled from France by Napoleon for his political activities. St. Mary's Seminary Chapel, which is now part of the Seton Hill neighborhood of Baltimore, Maryland, it is the oldest Neo-Gothic style church in the United States. Godefroy claimed that his design was the first Gothic building in America. It was listed on the National Register of Historic Places and designated a National Historic Landmark in 1971.

Outside of the Church http://en.wikipedia.org/wiki/St._Mary's_Seminary_Chapel 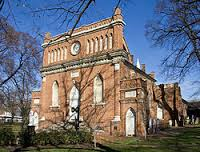 "The Architecture of Maximillian Godefroy," by Robert Alexander 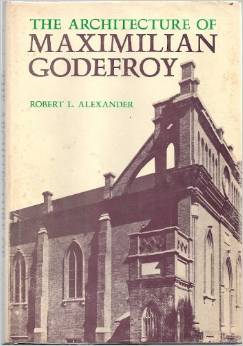 The French-born architect Maximilian Godefroy (1765-c.1840) designed St. Mary’s Chapel. Godefroy spent 14 years in the United States (1805-1819) after being exiled from France by Napoleon for his political activities. Godefroy is credited with introducing America to many distinct styles and elements of French architectural developments of the late 18th and early 19th centuries. Other Baltimore landmarks designed by Maximilian Godefroy are the Battle Monument in downtown Baltimore, and the Unitarian Church located only a few blocks from St. Mary’s Chapel. Godefroy was a friend of Benjamin Latrobe, who is often referred to as the Father of American Architecture.

The upper chapel was designed to serve the spiritual and worship needs of the seminary community. The initial design featured choir stalls facing each other in the nave of the chapel, a common design used in monasteries and seminaries which was more helpful for the antiphonal recitation of the hours of the Divine Office. Many of the Sulpician Fathers who called this seminary chapel their spiritual home went on to become bishops of early dioceses across the United States. For example, Simon Gabriel Bruté de Remur, first bishop of Vincennes (now Indianapolis), John Joseph Chanche, first bishop of Mississippi, and finally Louis W. DuBourg, founder of St. Mary’s College and later first bishop of New Orleans.

The area surrounding the historic site which was once called "Chapelle Basse" (lower chapel) is now known as the Seton Hill neighborhood of Baltimore City. Two hundred years ago the area that encompassed the seminary and St. Mary’s College on North Paca Street was diverse. In the early 1800s, the neighborhood was known as Baltimore’s French Quarter. "With individuals from Canada, Haiti, and other French-speaking countries; the French Sulpician Fathers felt at ease in this section of Baltimore."