This statue depicts one of the most prominent national figures of the 19th century, Joel Roberts Poinsett (1779-1851). A man of many interests, Poinsett was a diplomat, statesman, botanist, and scholar. He was the first United States minister to Mexico, serving from 1825 to 1829, and is perhaps best known for introducing the poinsettia plant to America. The plant, which is native to Mexico, is called "Flor de Nochebuena" in Spanish, but in America, it was named after him. Poinsett, who was born in Charleston, also served in the U.S. House of Representatives from South Carolina. He owned a summer home in Greenville and a plantation on the Peedee River. Although he owned slaves, Poinsett argued for the gradual end of slavery during the 1830s when most other white South Carolinians were presenting slavery as something that must be preserved and expanded. Poinsett also served as the president of the National Institute for the Promotion of Science whose collections were transferred to the Smithsonian in the 1850s. The statue is located in Court Square in the heart of downtown Greenville.

Joel Roberts Poinsett (1779-1851) was the first U.S. ambassador to Mexico and introduced the poinsettia plant (which was named after him) to America. He earned the nickname "Versatile American" for his many interests. 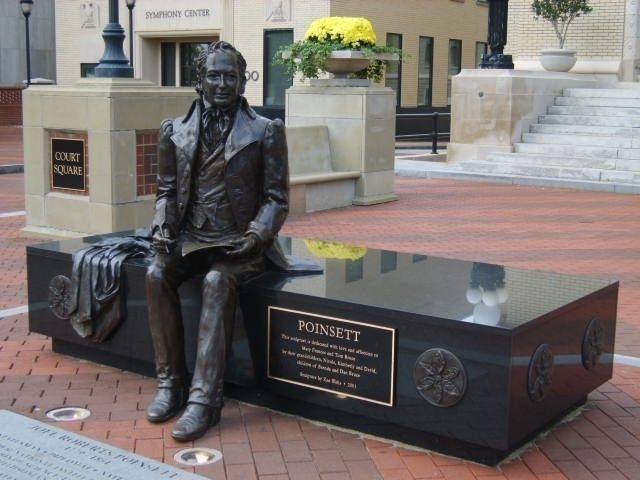 Poinsett was proficient in several languages, a skill that he used throughout his career. 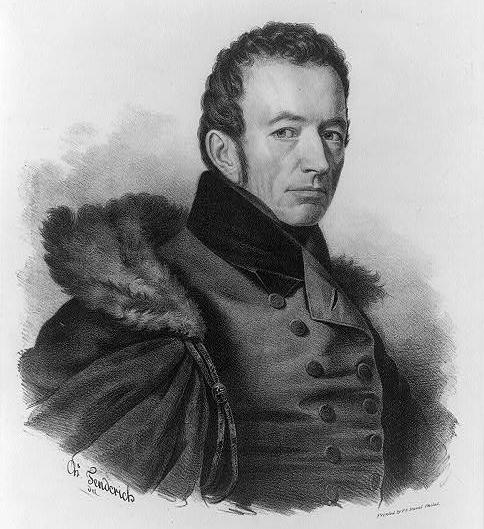 Joel Roberts Poinsett was born on March 2, 1779 in Charleston. His father, Elisha, was a Huguenot (a French Jew) and physician, and his mother was from England. Elisha and private tutors educated Poinsett as a boy and he spent six years in England during his childhood. It was there that his formal education likely started. In 1794, he enrolled in a private academy in Connecticut and two years later attended a private school in England where he studied and became proficient in German, Spanish, French, and Italian. He then moved to Edinburgh, Scotland to attend medical school but returned to England after a year to enroll in a military academy in the hopes of starting a military career.

His father, however, wanted him to come home and study law. Poinsett sailed back to America in 1800 but eventually lost interest in law and returned to Europe in 1801. He spent the next seven years traveling around Europe as well as Asia. His ability to speak several languages enabled Poinsett to establish relationships with leaders such as Napoleon Bonaparte, Czar Alexander I, and French financier Jacques Necker. Poinsett returned to the United States in 1808 as tensions between America and Britain were increasing. It appears he hoped to serve in a possible war with Britain (the situation culminated in the War of 1812) but he was instead appointed as a U.S. trade envoy to South America, specifically to Chile and Argentina. In both countries, he established diplomatic and trading ties to the United States, but he also fomented rebellions against Spain, which ruled both countries. His attempts ultimately failed and he sailed back to Charleston in 1815.

In 1816, Poinsett was elected to the state legislature and served two terms. President James Monroe offered him the position of special envoy to South America again but he declined. While in office, he also served as the president of South Carolina Board of Public Works. He oversaw the project of building a highway from Charleston to Columbia. In 1821, Poinsett was elected to the U.S. House of Representatives and served until 1825. From August 1822 to January 1823, President James Monroe sent him to Mexico on a special diplomatic mission. He wrote about his experiences in a book titled Notes on Mexico.

After his term in Congress ended, he was appointed as U.S. ambassador to Mexico and tasked him with convincing Mexico, which had recently won its independence, to sell Texas. Poinsett was also instructed to encourage Mexico to lessen its ties with Britain and Europe and establish a treaty with the U.S. (this would help fulfill the Monroe Doctrine, the American policy that claimed that the Western Hemisphere was under America's sphere of influence). In January 1828, the two countries signed the Treaty of Limits, which confirmed the border established in 1819 by the Adams–Onís Treaty. However, Poinsett still tried to buy Texas, which Mexico refused to sell. Mexico also accused Poinsett of meddling in their affairs. In the end, Mexico asked Pointsett to leave.

Upon returning to South Carolina in 1830, Poinsett served another term in the state legislature. During the next few years, he helped prevent South Carolina from seceding from the Union during the Nullification Crisis (many in South Carolina believed federal tariffs were unconstitutional and null and void within the state). In 1837, he was appointed Secretary of War. Under his leadership, the military increased in size and underwent significant reforms. Poinsett also continued the removal of Indians from their traditional lands and encouraged exploration of the west.

After leaving office, Poinsett spent the rest of his life on his wife's farm. He continued to study botany as well as agriculture and animal husbandry, and encouraged the South to end the institution of slavery. He became the president of the National Institute, which was the predecessor to the Smithsonian Institution and served on the board of visitors of South Carolina College. He died on December 12, 1851.