The Sun Prairie City Hall was built in 1895 and was a significant municipal achievement for the small but growing community emerging from its pioneer era days. Located in the center of Sun Prairie’s downtown, the Romanesque Revival style building’s first floor included a council room, jail, vault and two rear bays serving as the engine house storage for the local fire department, with a 1000-gallon cistern of water storage in the basement below. The second floor contains an open hall running the full length of the building that was used for dances, operas, agricultural shows and other community centered events. The building is capped by 65’ tall tower that held the town’s fire bell and a commanding presence over the downtown area. The city moved to a new municipal building in 1956 and the “Old City Hall” passed to private ownership, with commercial use on the first floor and apartment residences above. The Hall was severely damaged in 2018 by a gas explosion that destroyed several buildings in downtown Sun Prairie, however the current owners have completed renovations including restoration of the 2nd floor auditorium hall to its original 1895 appearance. The building is currently the home of Flavor’s Wine Bar and is accessible to the public. 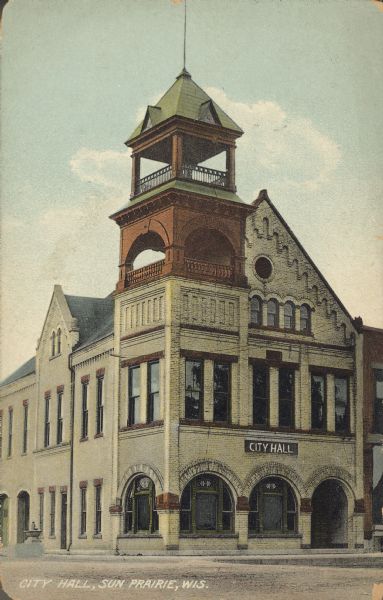 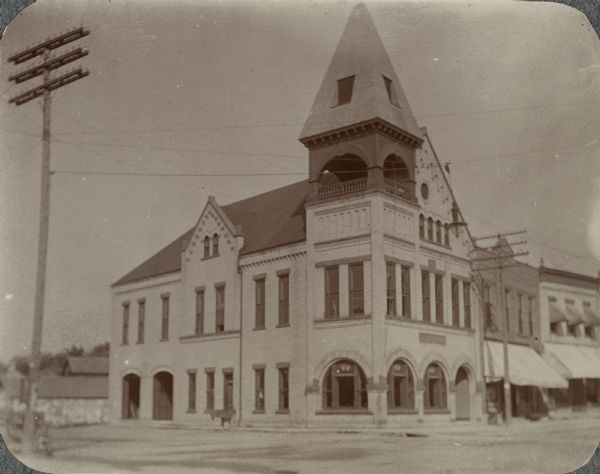 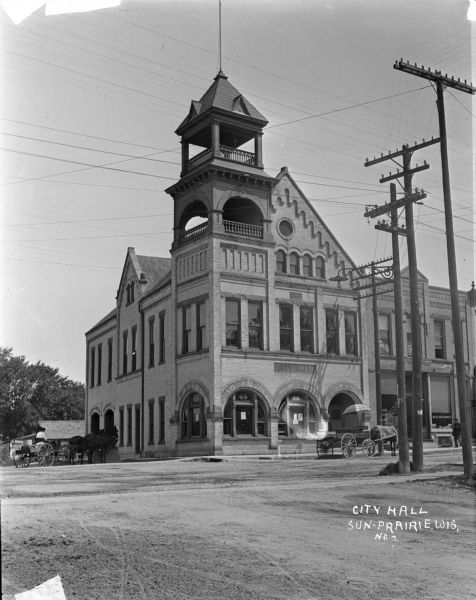 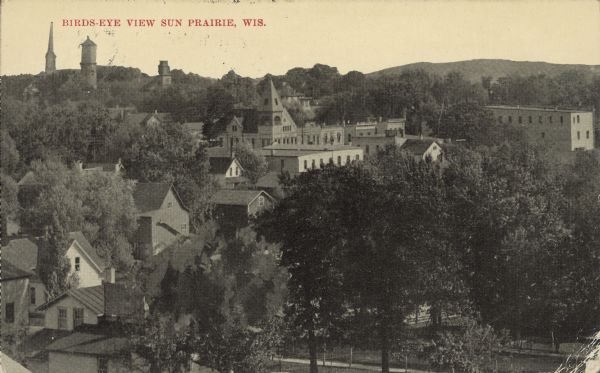 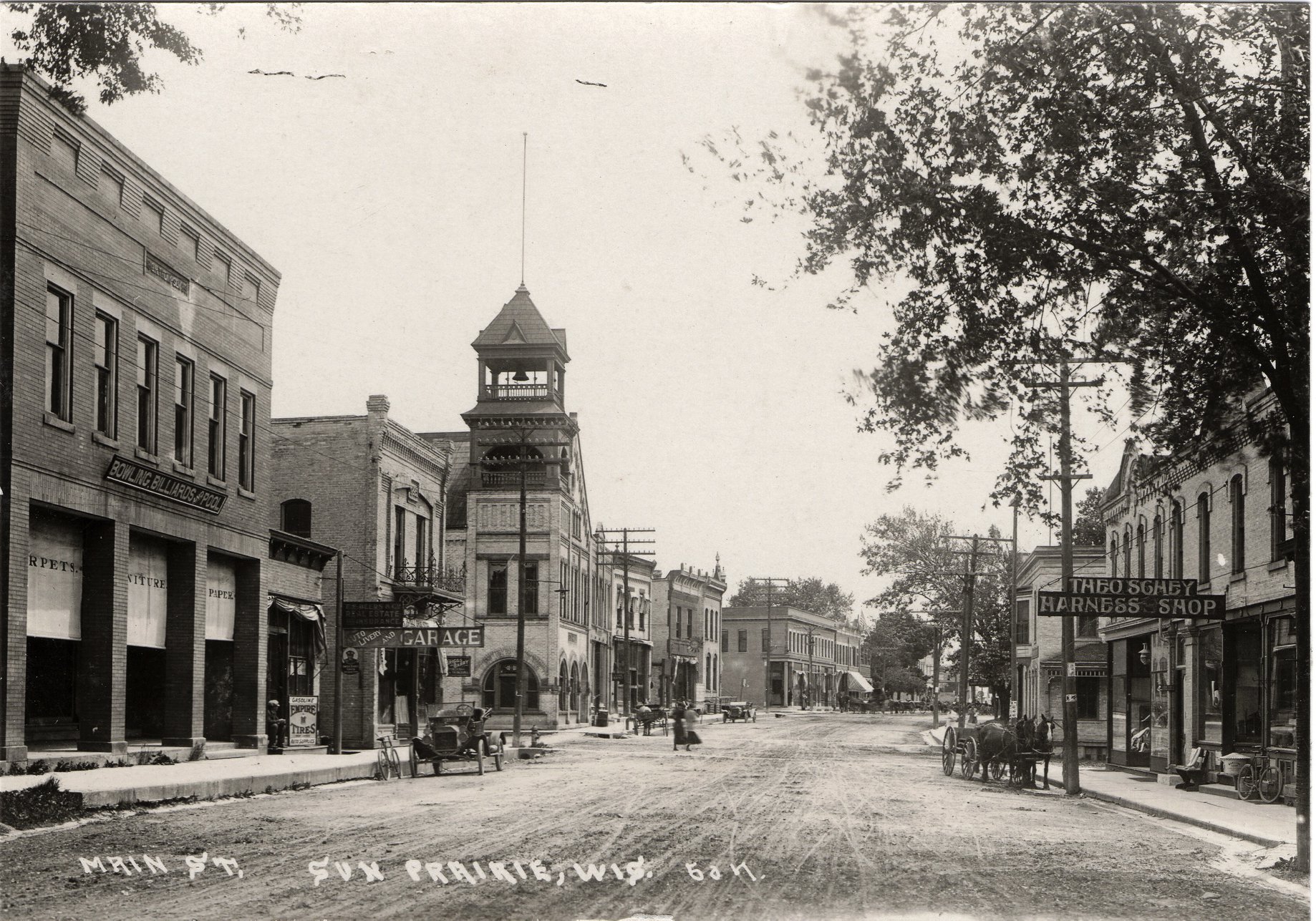 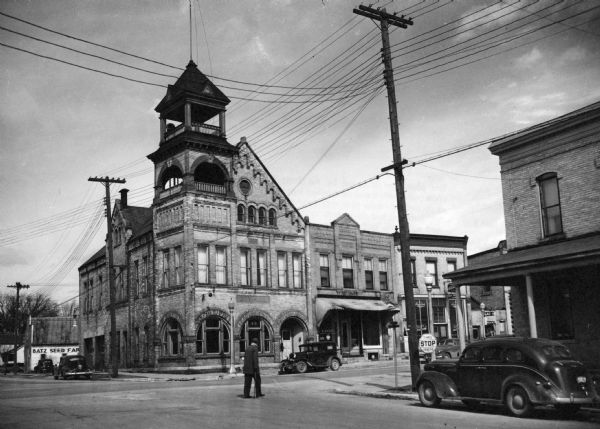 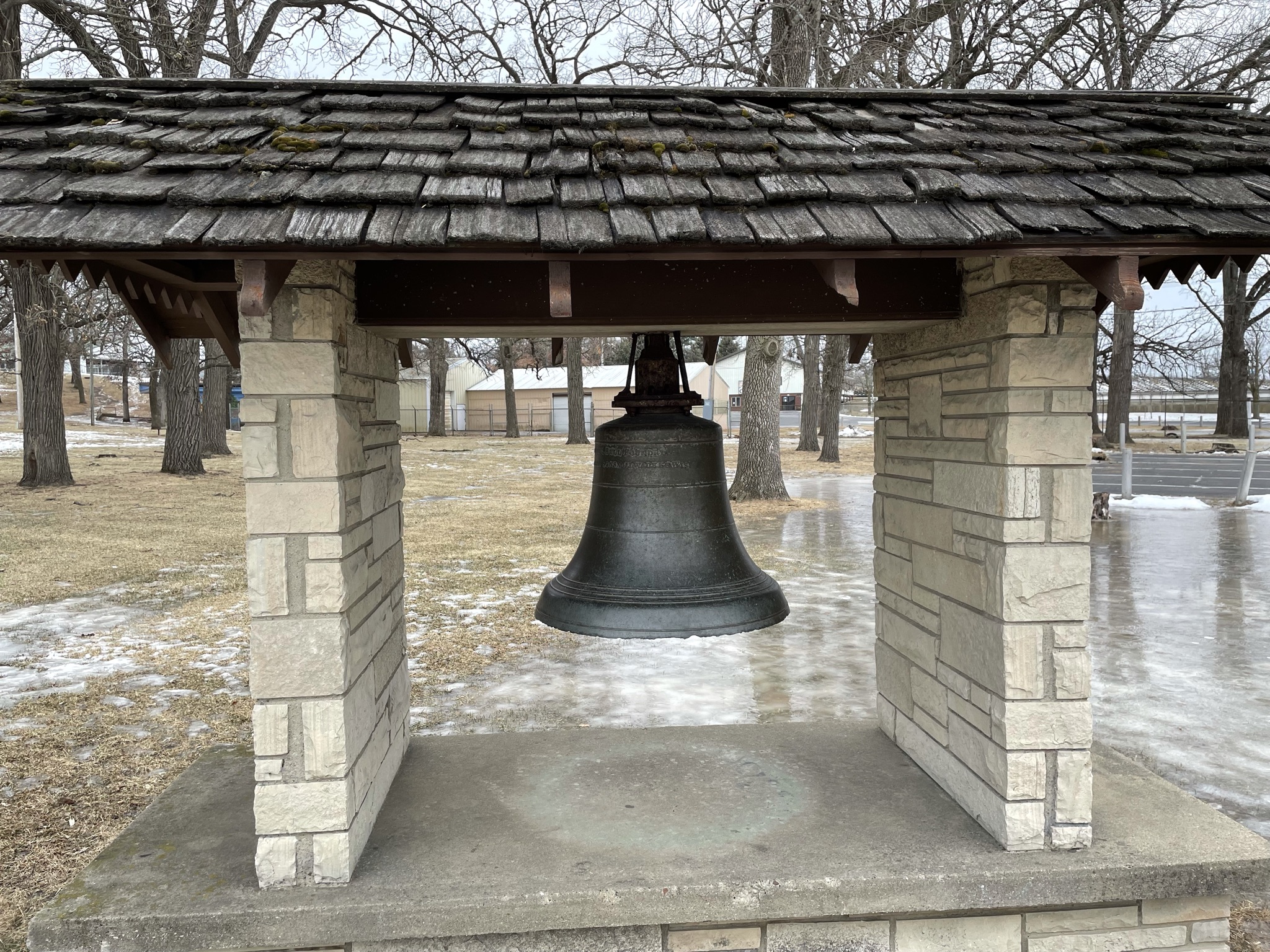 The village of Sun Prairie was first settled in 1839 and after the Wisconsin and Baraboo railroad laid tracks to the town in the late 1850’s a period of steady growth ensued. By 1890, the village had a population of some 700 people, with an emerging downtown district that was the center of commerce for the surrounding agricultural area. A small, wood frame village hall stood on the northwest corner of King and Lane Streets and, after a notable fire early in the 1891, was used as a rally point for the newly formed fire company. It was this fire company that spurred the action toward building a substantial city hall structure in 1895 through a petition for a vote in the spring election of that year. The hall was advertised as being an “ornament to our town…. reflecting the true enterprise and credit upon the part of our people” and notably would eliminate the need to push the heavy equipment several blocks uphill before fighting a fire in the downtown district. On April 2, 1895, the village voted 112 to 39 to approve the building of a Village Hall at a cost of $6,000.

The village board moved quickly to begin work on the new hall, securing a prime, 35’x100’ corner lot at the city center from C. L. Long for the sum of $1,350 in May 1895. By July, excavation of the basement was underway, and the local newspaper published a description and artist rendition of the building as designed by Marcus C. Radway of Ripon, WI, a notable local architect. The first floor included three sections; a council room fronting on Main Street was intended for the political business of the village and later served as the first library for the community. In the center section was placed a jail cell (ornamental jail bars adorn the outside of this section today) and fireproof vault for storage of important items, and in the rear of the building were 2 “garage like” bays, opening onto Bristol Street, for storage of the fire company’s engine and hook & ladder equipment. A 1000-gallon water reserve cistern located in the basement was a further piece of the building’s firefighting function. The second floor of the 35’ by 80’ building was composed entirely of a large hall intended for public gatherings with front and rear entrances and 15’ high ceilings.

The exterior of the building was finished in an ornate Romanesque Revival style and has recently been restored to reflect its original configuration. Cream colored brickwork is predominant on the south and west faces, accented with sills and lintels of burgundy colored sandstone. A distinctive, two-tiered bell tower occupies the southwest corner and was originally equipped with a fire alarm bell that could be wrung by anyone spotting a fire via a rope running down the side of the tower. This bell now sits in a small monument at the Park Street entrance to Angell Park. As originally designed and constructed, the second story of the tower was 65’ high and consisted of an enclosed “spire” type structure. The top tier was replaced by 1911 and consisted of a more open, slightly lower design that is matched by the building’s current, restored configuration. A sandstone inlay facing Main Street proudly denotes the building as “City Hall”; although a bit prematurely as Sun Prairie did not formally become a city until 1958.

Construction of the building was proceeded through the summer and fall of 1895 under general contractor P. J. Peterson, completing in November at a total cost of $5,375. The building was a major community achievement, and a celebratory dedication ceremony was held on November 28, 1895 with a reported 500 attendees. The day’s events included entertainment by the Sun Prairie Cornet Band and a female quartette who reportedly sang “I Softly Dream” with “such good effect that they were forced to respond to an encore”. Speeches followed by Village President H. H. Connor and local dignitaries Dr. Charles G. Crosse and John W. Leary, followed by more music and poetry. During the evening, a “supper” provided in the fire engine room was followed by a grand ball “attended by 97 couples and the inspiring strains of the Sun Prairie orchestra who kept the willing feet in motion until a late hour”. The new building and more specifically, the availability of the 2nd floor assembly hall, enabled the support of a diverse set of civic events through the late 1890’s and early 1900’s. A sampling of contemporary news articles indicates agricultural shows, lectures, dances, concerts, operas and graduation ceremonies all taking place in the hall. The hall served as a gymnasium for winter athletics and was even used for an indoor baseball league.

Sun Prairie’s population surpassed 1,500 in the 1930’s as the village slowly outgrew the City Hall. In conjunction with the construction of a new Municipal building on Columbus St. in 1956, now the home of Sun Prairie Fire and EMS services, the village sold the “Old City Hall” to local developer Emden Schey in 1954 with the intention for it to be the home of a new bank that was being proposed. Ultimately however, the bank’s approval for organization was denied and the property began a period of use as Schey’s real-estate office and other commercial purposes. The 2nd floor hall was reconfigured for 3 apartments and the original fire company bays were transitioned as a separate commercial entrance on Bristol Street. Nevertheless, the building continued to serve as an icon for Sun Prairie’s downtown, with the bell tower architectural theme carried into the construction Sun Prairie’s new City Hall in 1993 and the development of Cannery Square in 2004.

On July 18, 2018, a contractor struck an underground gas line while boring a hole for fiber-optic cable resulting in a fatal explosion that destroyed several downtown buildings and severely damaged the Old City Hall. Subsequent restoration work not only repaired the damage but also returned the building closer to its original 1890’s configuration and external appearance, including full restoration of the 2nd floor as an open space area. The building is currently the home of Flavors Wine Bar with lounges and private rooms on the first floor and the 2nd floor “Grand Hall” available for larger events. The Old City Hall and associated buildings in the Sun Prairie downtown district were added to the National Register of Historic Places in 2019 where they continue to connect modern Sun Prairie to its late 19th century roots.