This church is believed to be the oldest rural African American church in the state of Tennessee. The building was constructed in 1869 and served as a both a school and a place of worship until the 1920s. The building served several congregations throughout the 19th and early 20th century. Today, the building is home to one congregation, the Pikesville AME Zion Church. 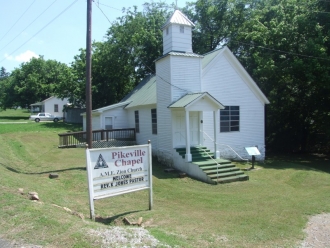 The Freedmen's Bureau in 1869 formally established a building for the use of both a church and a school to be used by the Pikeville, Tennessee region African-American community. The school portion of the building was referred to as "Lincoln Academy".

The school-function of the building lasted until 1925. At that time, the Rosenwald Schools Fund constructed a building for the sole use of education. The school was built near Pikeville and was named Lincoln School. The school closed down in 1965 as desegregation came through the area.