One of two surviving South Dakota-class battleships, Alabama was commissioned in 1942 and spent forty months in active service in World War II's Pacific theater, earning nine battle stars over twenty-six engagements with the Japanese. The keel of the USS ALABAMA (BB-60) was laid at the Norfolk Navy Yard on 1 February 1940, the sixth vessel to bear the name of Alabama. At the outbreak of hostilities, her hull construction was nearing completion. Some two years later (16 February 1942), the new South Dakota Class battleship was launched in a colorful ceremony attended by many national figures. Sponsoring the vessel was Mrs. Lister Hill, wife of Alabama's Senator Hill. On 16 August 1942, in ceremonies at Portsmouth, Virginia, the new ship was placed in full commission and Captain George B. Wilson, USN, assumed command. 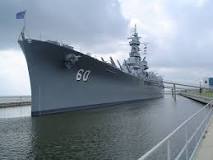 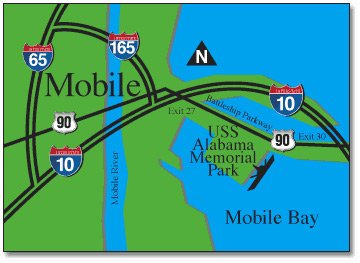 Battle History of the USS Alabama:

The USS Alabama's first major Pacific engagement was in the Gilbert Islands in November and December 1943. From this assignment, the battleship proceeded to Roi and Nauru. After heavily bombarding these installations, she moved to Kwajalein and Majuro were secured, the fleet moved into anchorage, and commenced planning the forthcoming attack on the Caroline and Marianas Islands.

On 12 February 1944, ALABAMA sortied with units of Task Force 58 and launched strikes on Truk in the Carolines. Upon retiring, the force moved to the Marianas and gave enemy bases there a thorough pounding. In the course of these raids, the ships underwent severe air attacks with one raid on the night of 21-22 February lasting 13 hours. The ALABAMA downed one Japanese "Betty" on 29 March 1944. On 1 April, she was in the force making the first raids at Palau, Yap, and Woleai in the Palau Islands, retiring for a week in Majuro.

The days and nights of 21-24 April 1944 were spent in supporting the operations along the North coast of New Guinea, where General MacArthur's troops moved ashore at Hollandia, Ataipe, and Humboldt Bay. Steaming at top speed, ALABAMA arrived back in the Carolines in time to participate in the bombardment and strikes on Ponape and Truk on 29, 30 April, and 1 May 1944. The remainder of May 1944 was spent at anchor in Majuro Harbor.

The ALABAMA and other powerful units of the Fleet got underway for pre-invasion softening-up strikes in the Marianas. For seven hours on 13 June 1944, the fast battleships bombarded Saipan while mine-sweepers cleared the landing lanes for the small craft. On 15 June, the assault troops moved ashore under the protective fire of the "big boys," and the ALABAMA accounted for another enemy plane.

ALABAMA steamed with TG58.7 during the battle of the Philippine Sea, 19-20 June 1944, and her group downed nine enemy planes. The result of the action was some 476 enemy planes destroyed out of a total of 545 sighted, to only 130 American planes lost and minor damage to four ships. When the fight was broken off, the U.S. force made an attempt to catch the enemy fleet, but their high speed retirement made it impossible to make surface contact. Pursuit was abandoned and ALABAMA, in company with other units, returned to support operations ashore.

On 6 July 1944, the ship retired to Eniwetok, and upon arrival, Rear Admiral L.W.Hanso, USN, broke his flag aboard as Commander, Battleship Division NINE. After making attacks on bases in the Carolines (25-27 July) in support of the Marianas operations, ALABAMA moved into the area of Guam for pre-invasion and D-Day support, continuing until the island was secured in August 1944.

While undergoing an 18 day logistics period at Eniwetok, Captain Vincent R. Murphy, USN, relieved Captain Kirtland as commanding officer of BB-60. With Captain Murphy as skipper, ALABAMA participated in the series of attacks and raids in connection with the capture and occupation of the Southern Carolines and the Palaus. This operation was carried on throughout September 1944.

From the more advanced base of Ulithi Atoll, ALABAMA and other ships continued operations in the Western Pacific, the first assignment being in support of the Leyte operations. ALABAMA steamed in company with the carriers throughout October as the planes wrecked Japanese military installations in the Philippines, Formosa, the Pescadore and the Ryukyu Islands. Japanese air attacks on the carrier-battleship force were furious and persistent, however, ALABAMA helped drive off all attacks without damage to herself or any carriers in her group.

Moving southward, the fast ships launched strikes at various enemy installations in the Philippines, shooting down 3 enemy planes and damaging a 4th. In late October, it became apparent that the enemy was moving a strong surface force into the area to oppose U.S. landings. ALABAMA was the member of Admiral Halsey's force which fought in battle off Cape Ehgano on 25 October as a part of the Battle of Leyte Gulf. This battle removed the enemy's threat to Allied landing in the Philippines, and cleared the path for further operations.

After a brief rest in Ulithi, the big ship moved into the area on the Mindoro (Philippines) operation, and, while in this vicinity, she rode out a fierce typhoon in December, which cost the U.S. Fleet three destroyers in the group. On Christmas Eve 1944, news was received that ALABAMA was to retire to the U.S. West Coast for an extended drydock period. At Pearl Harbor, Captain William B. Goggins, USN, came aboard and, upon the ship's arrival at Bremerton, Washington, he relieved Captain Murphy as commanding officer.

During the vessel's overhaul, crewmen was granted rehabilitation leave to rest up after two long years of continuous operation in the forward area. After clearing the shipyards, ALABAMA held refresher training exercises in the waters off Lower California, and proceeded then to join the Fleet at the anchorage in Ulithi, arriving in early May 1945. As a member of the THIRD and FIFTH Fleet, the battleship participated in the Okinawa Gunto supporting raids on the Japanese home islands.

While carrier planes were carrying out their strikes on Kyushu, Japan, enemy planes tried in vain to break through the formation in attempt to make their suicide dives. On the morning of 4 May 1945, several of the Japanese penetrated the combat air patrol defense and, in the midst of the attack, a Kamikaze plunged through the low clouds into Admiral Mitcher's flagship, USS ENTERPRISE. Of the four other planes which attacked the surface formation, ALABAMA's gunners shot down two which crashed only about 1,000 yards away.

On 5 June, while conducting operations off Kyushu, the task force rode out a typhoon with ALABAMA experiencing slight damage, and cruiser PITTSBURGH losing nearly 100 feet of her bow. On 10 June, ALABAMA received orders to proceed southward and join other battleships in the bombardment of Minami Daito Jima. This new assignment was carried out, and the ship proceeded to the newly developed base in Leyte Gulf.

The THIRD Fleet's biggest venture was soon to be executed, and after three weeks at anchor, ALABAMA steamed in Admiral Halsey's task force enroute for the home islands of Japan. After the carrier planes had raked the islands from Nakasaki to Hokkaido, enemy targets practically disappeared, and the opposition encountered was negligible. On 14 July came the phase of the operation which was purely a battleship function. Three new "big ones" were turned loose on an industrial area on Hokkaido and, although ALABAMA was not one of them, she spurred her fleetmates on with much enthusiasm--at last, the dreadnoughts were getting a crack at the Japanese in a more direct way than protecting the carriers.

ALABAMA got her chance on 17 July 1945, with her principal target for the bombardment an engineering works on Honshu Island, about 50 miles north of Tokyo. Some 1500 tons of shells were thrown into the mills and factories under the cover of darkness, but the destruction could not be observed due to a heavy rainstorm. Nevertheless, ALABAMA later learned that she had done a very handsome job of demolishing the targets assigned her.

The end of the war found the ship still at sea, and, after 67 days of continuous steaming, she dropped anchor in Tokyo Bay, remaining for two weeks while her landing force assisted the occupation of the Yokosuka-Tokyo area. On 20 September 1945, ALABAMA stood out from Tokyo. At Okinawa, she embarked some 3700 passengers for the U.S., thus doing her bit in the task of returning the Pacific veterans. Navy Day, 27 October 1945, was spent with other units of the THIRD Fleet in the celebrations at San Francisco. On 26 November 1945, Captain E. H. Pierce, USN, relieved Captain Goggins as Commanding Officer.after being moved to Bremerton, Washington, she was decommissioned on January 9, 1947

A nationwide tour of museum battleships. Since World War 2, American seapower has been virtually unchallenged around the world. Her battleships have often been the symbol of that power, despite the fact that they were relatively obsolete by the end of World War 2--aircraft carriers and guided missiles made it difficult for the floating battlewagons to compete. This tour only includes existing museum ships, not memorials of bygone vessels (which deserve a tour all their own). An exception is made for USS Olympia--technically only a "protected cruiser." However this vessel, which served as Dewey's flagship at the Battle of Manila Bay, was the most powerful ship in the US fleet at the time, and the direct ancestor of WW1 and WW2's "true" battleships. As such she is included to provide a more comprehensive perspective on battleship development.