The construction of Bosler Hall on the John Dickinson Campus began in 1884, and was completed on June 23, 1886. The building was made possible through a gift from Helen (Beltzhoover) Bosler and was named the James Williamson Bosler Memorial Library in memory of her husband, a member of the class of 1854. Faced with red sandstone, the building was the first designed specifically for the purpose of housing the college’s library. Bosler Hall also included a chapel and assembly space on the top floor. Constructed at a cost of $68,000, the building was designed by architect Charles L. Carson. In 1940-41 the building was transformed, enlarged, and refaced with limestone in the Georgian style according to the designs of architect William W. Emmart. This renovation was completed for $135,440. Following the construction of the Boyd Lee Spahr Library in 1967, major alterations were made to Bosler Hall, and it became the home of the fine arts and modern language departments. The building was renovated once again in 1983 at a cost of approximately $2 million. Primary among the changes for this renovation was the establishment of space in the building to house the Media Center. 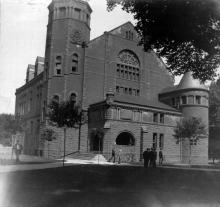