Cleveland, Tennessee is located in Bradley County, in the southeastern portion of Tennessee. It was in Cleveland that George Hensley became a licensed minister. Hensley’s background, and his ministry is very interesting. His background included moonshining, and subsequently escaping the chain gang. His arrest for moonshining in 1922 led to him being assigned to work on the chain gang. Prohibition made moonshining a serious crime. The origins of the snake handling can be traced back between the years 1908 and 1910, and the originator is often credited to being George Hensley. A definitive date has not been established as to when Hensley started snake handling as part of his ministry. Hensley’s ministry career sees him stopping and restarting his ministry multiple times. During Hensley’s ministry, as news of his snake handling spread, people would travel great distances to witness the experience. According to David Kimbrough’s Taking Up Serpents: Snake Handlers of Eastern Kentucky, the September 21, 1914 edition of the Chattanooga Daily Times illustrates the risks Hensley was willing to take in the name of faith. In addition to snake handling, drinking poison was also a practice that Hensley was willing to partake in to prove his faith. Despite snake handling losing some of the popularity it enjoyed in the 1910’s and 1920’s, Hensley continued the practice and preach despite laws that were against snake handling. Due to the popularity of snake handling, several states passed laws that made it illegal to conduct services that included snake handling. In 1945, Hensley was arrested and fined for his practices. Despite conducting several consecutive services without snakes being involved, he introduced a snake to the congregation in Altha, Florida. He preached with the snake around his neck. However, when he went to put the snake back in its container, Hensley was bitten by the snake. He was in visible pain, and resisted medical treatment. George Hensley died from a snakebite on July 25, 1955 in Altha, Florida. A lot of oral history is used by authors like Kimbrough that write about Hensley. 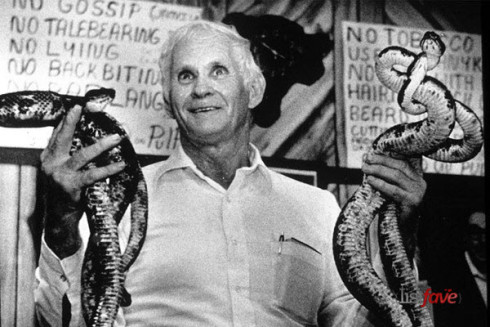 It is difficult to say exactly who, where, when the first snake handling church service took place. However, many people credit George Hensley with starting the popularity of snake handling in the 1910s and 1920s. Hensley received his ministers license from the Church of God in Cleveland, Tennessee.