Fort Nashborough was established in 1779 in what is now the city of Nashville. The fort housed one of the earliest settlements of American settlers of European descent along the Cumberland River. The fort's initial purpose was to support traders and protect area settlers from potential conflicts with the Cherokee and other tribes who controlled the area. The fort saw its largest engagement in April 1781, when area tribes attacked the fort. The settlers prevailed thanks to the fort's defenses. As more settlers came into the area, Native tribes no longer sought to challenge the European presence so directly. By 1792, the fort was no longer necessary. In the 1920s, members of the Daughters of the American Revolution decided to create a replica of the fort to honor the city's early history. During the mid-20th century, the fort offered tours and living history programs. The fort is presently closed but there are numerous plans in place to develop the area into a historical park.

This replica of the original stockade fell into disrepair and has been demolished. Plans are in place to create another fort as part of a larger riverfront development plan. 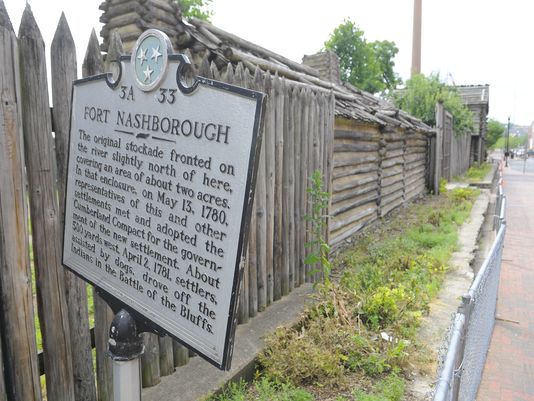 Previously known as Bluff Station, Fort Nashborough was originally established in 1779 by John Donelson and James Robertson.  The fort was built along the Cumberland River on a two-acre parcel and represented the first permanent settlement Americans of European descent in the area.

The fort protected area settlers in the summer of 1781 when Chickamaugan warriors attempted to attack the settlement and Fort Nashborough. Late in the night the Chickamaugan warriors ambushed the settlers and pinned them down.  However, soldiers at a nearby fort heard the gunfire and the forts hunting dogs were released.  The dogs attacked the Chickamaguan warriors and gave the colonial forces the advantage to push back their enemy in an engagement known as the Battle of the Bluff.

The fort fell into disrepair and the Daughters of the American Revolution reconstructed the fort in 1930. It was reconstructed again in the 1960s and awaits renovations once again.

Closed for renovation as of Nov 2016