This historic iron manufacturing site is located twenty-two miles south of Cedar City and includes the remnants of the iron production facilities that operated between 1868 and 1876. During this time the Deseret Iron Company, Union Ironworks, and Great Western Iron and Manufacturing Company built coke ovens, blast furnaces, and operational buildings for iron manufacturing. Remnants of the operational buildings and blast furnaces remain but the only fully intact structure is one of the two original coke ovens. The site is maintained by The National Society of the Sons of Utah Pioneers. There are no entrance fees and the site is open to visitors year round from dawn till dusk. 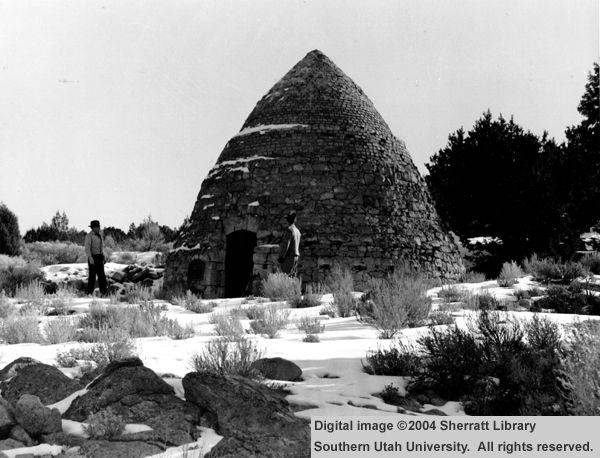 n 1857 the Deseret Iron Company established iron production on Old Pinto Road in Old Iron Town. Flooding of their previous location, Coal Creek in Cedar City, caused local leaders to move the iron production location closer to the coal source and further away from the possibility of a flood. In 1857, before production could start, further difficulties hit the Deseret Iron Company when Brigham Young sent the people of southern Utah a warning of a Utah War. For the next year, the saints in southern Utah focused their attention on storing grains and supplies needed in the event of a war and away from iron production.

After almost ten years of work the Deseret Iron Company spent $150,000 while producing around 400 tons of raw iron and “nothing more than a few andirons, kitchen utensils, flat irons, wagon wheels, molasses rolls, and machine castings.”1 Over a ten year period, the immense cost of production compared to the low return caused the company to fail and by 1858 the company closed down.

Before 1869, and the completion of the Transcontinental Railroad, Utah settlers had to import iron by wagon from the east, an extremely costly endeavor. With the failure of the Deseret Iron Company and the cost of iron high, Mormon leaders renewed their interest in the production of iron in 1868. With a new organized sound method of production and subsidies by both church and federal organizations, the location on Pinto Road in Old Iron Town started producing iron under the new Union Iron Works company. Under new leadership and renewed funds, the Union Iron Works company produced iron around 100 pounds of raw iron an hour. The iron produced was molded into stoves, irons, and milling equipment, then sold to miners in Nevada and Mormon settlers up north. The company expanded and by 1873 reorganized into the Great Iron and Manufacturing Company. During which, to meet the growth of production, the company added an engine house, two furnaces, a foundry, pattern shop, and a business office.

With the completion of the Transcontinental Railroad, iron become cheaper and easier to ship. Unavailable to meet its financial obligations, the Union Iron Works Company only lasted another three years before shutting down. In 1881 Mormon leadership once again sought the sustainability of Utah's local resources. By 1884 production and manufacturing were in line to start, but by this time litigation over the Edmunds-Tucker Act caused Federal agents to descend on Utah to enforce the law. Many Mormon leaders went into hiding, ultimately putting an end to many of the cooperative endeavors of the church, including iron production.

Year round from dawn till dusk.