Constructed in 1754 and used as a silk mill, this structure was moved in 1846 from Virginia to its current location and used as a seminary and later a military institute in the years leading up to the Civil War. During the war, troops from both sides were quartered at the home during various campaigns and structure also served as a field hospital. After the war, the house’s next two owners were Baltimoreans, one the former mayor and the other a former Confederate cavalry officer. The officer’s family kept the home until 1946 when they sold it to the former Bulgarian Prime Minister Ivan Stancioff. The house eventually came under the care of the Dolan family, who rented the house out for various functions to help with the upkeep. Dr. Bolarum then bought the house and has as yet unrealized plans to restore the home and rent it out for special functions.

General Stuart and his men riding off during the Sabers and Roses Ball to confront the Union men at Hyattstown, afterward they returned to the ball. 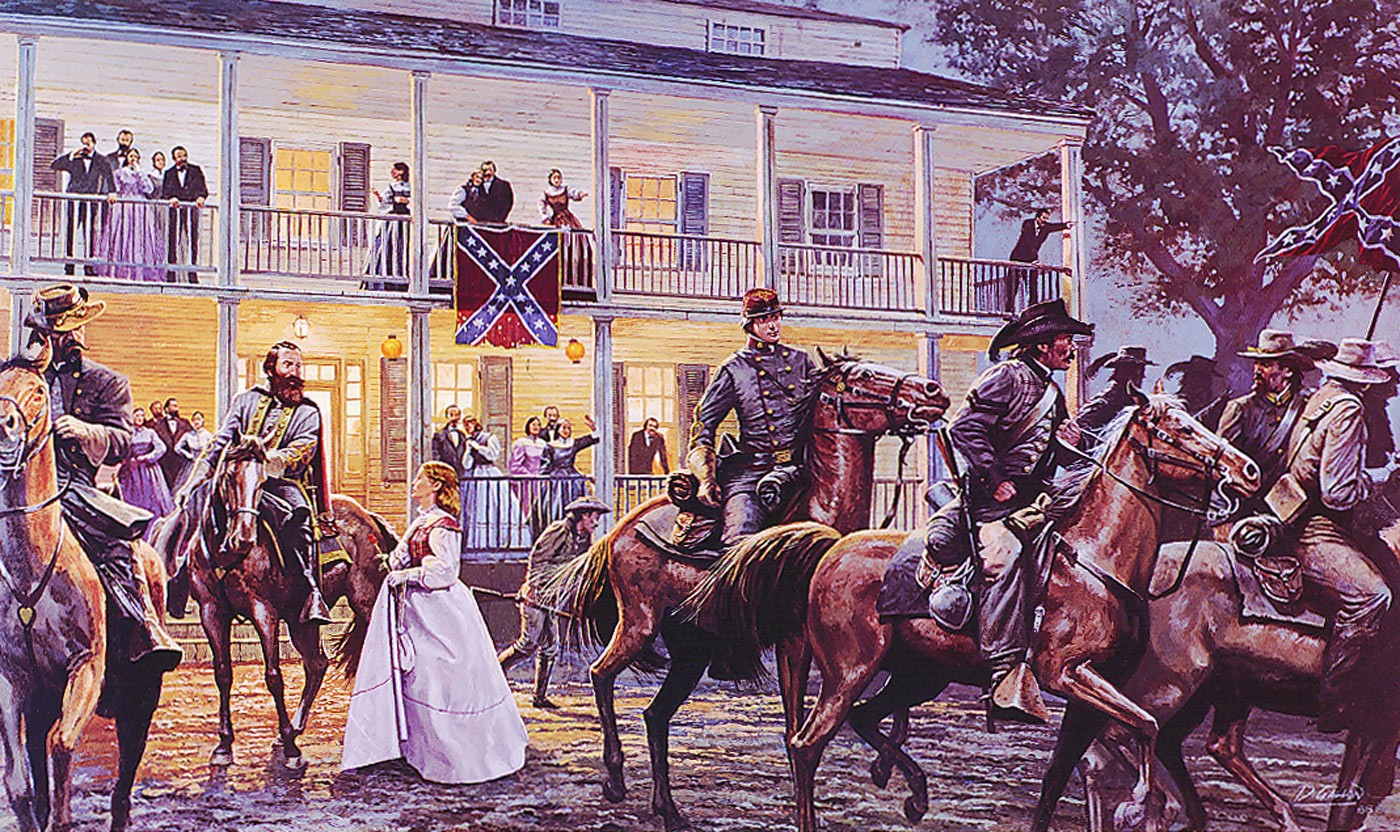 The house as it stood before current construction 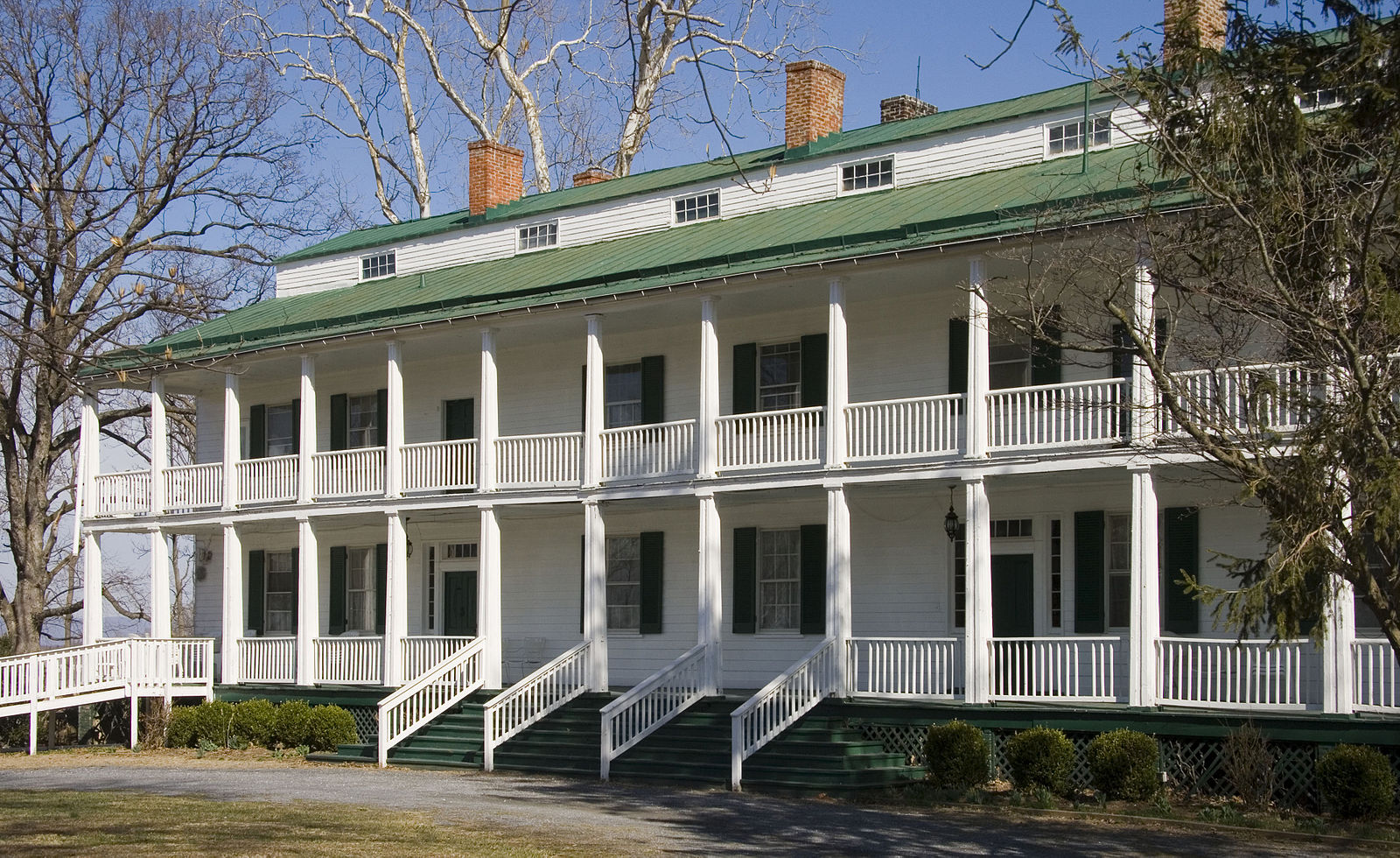 Originally constructed in 1754 upon the banks of the Rappahannock River near Fredericksburg Virginia, the Landon House worked as a silk mill up until 1846. In that year, the property was dismantled, moved by barge up the Potomac, and eventually reconstructed at its current site in Urbana, Maryland. The descendants of Reverend R. H. Phillips, the man responsible for moving the structure, have shown papers demonstrating information about the property's owners to previous owners of the house although these records have not been made public.

Upon its reconstruction, the house served as the Landon Female Seminary, a school for young girls, until about 1850. After that time, it became a military institute for young boys. However, this endeavor proved less than successful, and the house became a seminary again by the end of the decade.[1]

During the Civil War, the house was at the center of numerous conflicts and events. On September 8th, 1862, at the request of the owners and most the town, Confederate General J.E.B. Stuart and his cavalry regiment were invited to what became known as the Sabers and Roses Ball. During the ball, news reached the partygoers of Union men approaching the picket line at nearby Hyattstown, and so General Stuart and his men rode off to disuade this force. After reporting success in this endeavor, the men returned to the ball.

Throughout the war the building housed both Union and Confederate troops on their way to various battles in Maryland, and was used as a field hospital by both sides.[2] After the war, the property was bought by the former mayor of Baltimore, Sam Hinks a mayor and supporter of the anti-immigrant “Know Nothing” Party. Colonel Brien, another Baltimorean and former cavalry officer who was in attendance at the Sabers and Roses Ball, bought the home after Hinks' death.

The property stayed in Colonel Brien’s family’s possession until 1946, when the house was purchased by the former Bulgarian Foreign Minister and briefly Prime Minister Ivan Stancioff and his wife. The house was added to the National Register of Historic Places in 1975. The house remained in their family’s possession until 1997, when the Dolan family took ownership. The Dolan family worked to keep the house preserved and used it for various activities over the years, such as wedding receptions, the occasional reserved party, and every Halloween it hosted a haunted house. However, the house did not generate enough revenue and restoration costs and even basic maintenance costs led the house to fall into disrepair. The property was bought in 2013 by its current owner, Dr. Praveen Bolarum, for roughly half the house’s estimated worth.[3]

Dr. Bolarum had many plans for the house, including converting the property and land into a mixed-use retail and office space. The owner also hoped to create a wedding venue and a tavern called the Boxing Horse.[4] These ambitious plans have not been realized and little work has been done in the last few years and the property appears to have been on the market recently.