Built in 1910, Fire Station No. 23 is, as its name suggests, a former fire station in Downtown Los Angeles. Until 1920 it was the headquarters of the Los Angeles Fire Department, and the residence of every fire chief from 1910-1928. Its opening caused a political firestorm due to the ornate interior and expensive imported materials, leading to its nickname - the "Taj Mahal" of firehouses. After 50 years of operation, the station was closed in 1960 as the department began replacing older stations with new facilities. Since the 1980s, Fire Station No. 23 has been a popular filming location and used in movies such as Ghostbusters, The Mask, Police Academy 2, Flatliners, Firehouse and National Security.

A shot of the fire station as it stands today. 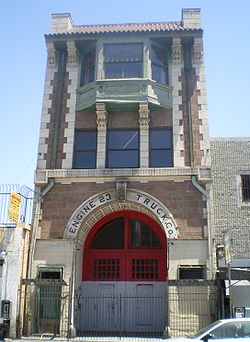 The plans for the fire station were announced in June of 1909 by the city. They wanted to build a three-story building in the heart of the manufacturing district that would also act as the headquarters for the entire fire department. It was estimated the building would cost around $35,000 but when it opened in 1910, the city had spent close to $53,000.

This high price was controversial at the time, and there were many critics of the materials used in construction. One such indulgence was the Peruvian mahogany in the chief's $25,000 living area. The LA Times reported:

The building design was quite narrow, only 26 feet (7.9 m), but its depth stretched all the way back to Winston Street. Active from 1910 until 1960, the Fire Station was manned by fifteen firefighters and ten horses. Other equipment from 1910 included the chief's buggy and a vertical tube boiler pumper. The company's first major call was a fire in the old Byrne Building that took ten hours to extinguish.

Throughout this time the station deteriorated and much of the furnishings were looted. By the mid-1970s, concerns were raised that the building had become a hazard, and some proposed tearing it down. But in 1979, the Fire Commission announced plans to restore the rooms back to their 1910 condition and turn the station into a museum. The City Council placed the station under control of the fire department but provided no funding for the museum. The fire department tried to raise the funds themselves but were ultimately unsuccessful and the museum never materialized.

In 1995 there was more controversy for the station when it was discovered that the fire department had been making money by using the fire station as a filming location. They made around $200,000 but did not hand it over to the city as required by law.