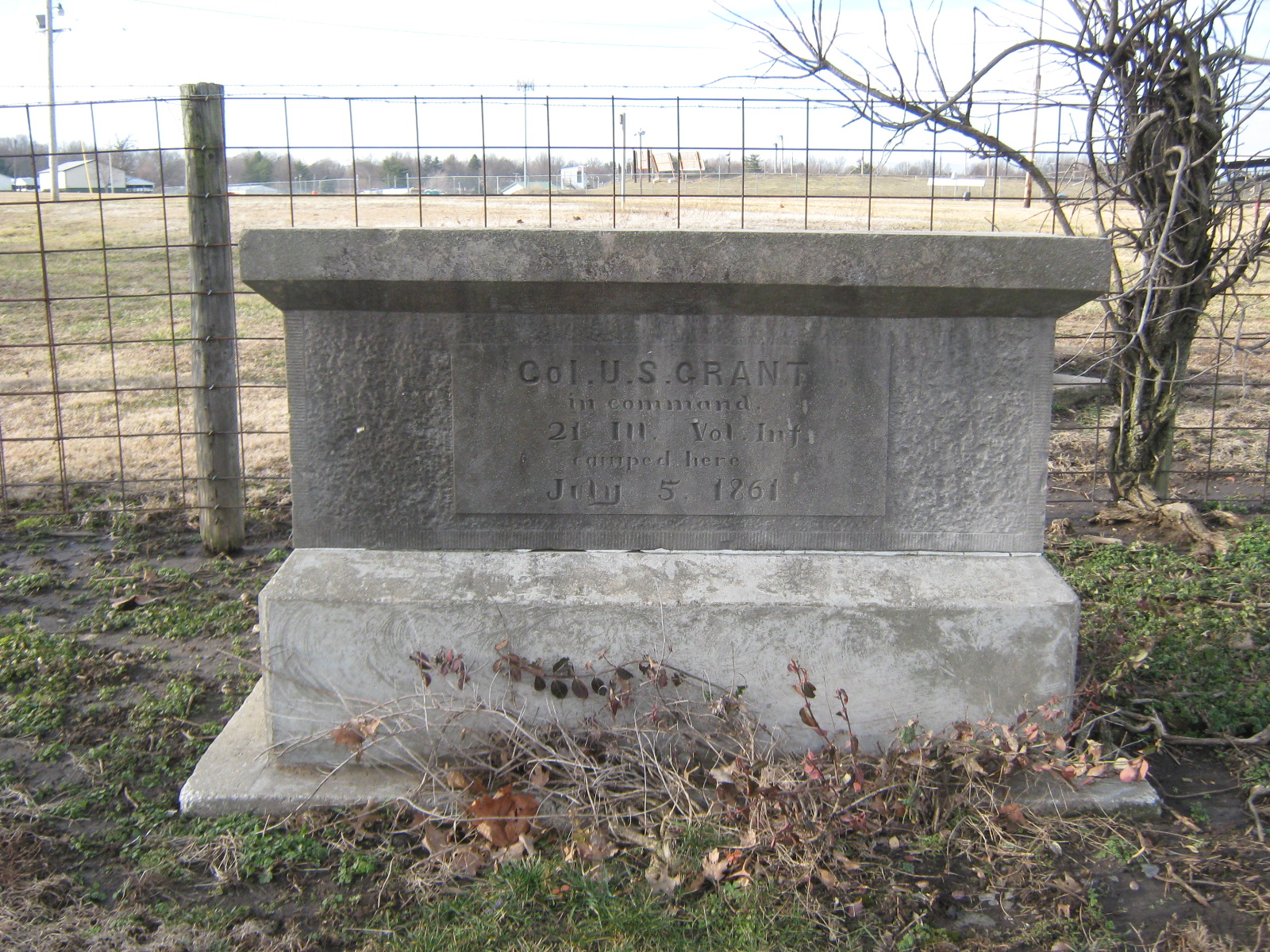 Col. Ulysses S. Grant passed up a chance to have his soldiers take a train. Instead, he thought it best that they march to war.

So, on July 3, 1861, Grant mounted a horse and led hist first command out of Camp Yates in Springfield, en route to Quincy. The 39-year-old Grant had molded his somewhat unruly troops — members of the 21st Illinois Volunteer Infantry Regiment — into a disciplined fighting force.

“There was direct railroad communication between Springfield and Quincy, but I thought it would be good preparation for the troops to march,” Grant wrote in his “Memoirs.”

The approximately 1,000 men of the 21st regiment marched about eight miles the first day before camping near present-day Riddle Hill.

On the Fourth of July, Grant led his men to Island Grove, where they stopped for a while at the home of Capt. James N. Brown, a wealthy farmer.

The march on the Fourth covered about 17 miles and ended on the Corrington farm, nine miles east of Jacksonville.

“I well remember that 4th of July as I watched Grant and his regiment go in camp just across the road from my father’s home,” Corrington wrote.

“Another reason that I remember it so distinctly was I had my pockets full of firecrackers; had been celebrating the 4th, when by some means, the crackers got on fire, and before I could get them out, they had burned a hole in my new cotton trousers; and as I was standing in front of Grant’s tent that evening, he said, ‘Son, what’s the matter with your pants?’ My answer was: ‘I had firecrackers in my pocket, and they got on fire.’ He laughed and said: ‘I bet you are a Union man,’ and I said, ‘Yes, sir.’ I was all through the camp, and the soldiers gave me several little keepsakes I prized very highly. They were a tired, footsore lot.”

On July 5, the 21st regiment broke camp and headed west to Jacksonville.

The regiment passed through Jacksonville on State Street late on the morning of July 5. As the soldiers marched past the Joshua Moore home on West State, 15-year-old Ensley Moore asked what regiment it was.

“The reply was ‘the 21st Illinois.’ And to the question who is your colonel, the reply was ‘Grant.’ Grant! I had never heard of him, and probably no other citizen of Jacksonville had,” Ensley Moore said years later. “But there he was, riding along up the street, his horse moving at a slow walk, an officer on each side of the colonel.”

The 21st made its way to the Morgan County Fairgrounds and rested. During the Civil War, the fairgrounds was called Camp Duncan and was used for drilling troops.

In 1910, A.Y. Hart of Mattoon, who served in the 21st, remembered the regiment’s brief stay at the fairgrounds, which was then about a half mile west of Jacksonville.

“Colonel Grant stationed himself at the gate at the fairgrounds and examined our canteens for whiskey,” Hart said. “One man of my company bought a coffee boiler, stopped the passage between the boiler and spout with wax, filled the boiler with whiskey and the spout with milk, and Colonel Grant passed him in.”

After resting at the fairgrounds, the 21st regiment marched about seven miles southwest of Jacksonville to Allinson’s Grove, where they camped on the night of July 5.

The next day, Grant and his command covered about 15 miles and set up camp at Naples on the Illinois River.

The 21st regiment later crossed the river, where it received orders to rescue another Union regiment that was surrounded by Confederates near Palmyra, Missouri. Before Grant’s men arrived, however, their comrades got out of their predicament and the services of the 21st were not needed.

Grant left the 21st regiment in August 1861, when he was promoted to brigadier general. The members of the 21st, most of whom were from eastern Illinois, later participated in the battles of Murfreesboro, Tennessee, and Chickamauga, Georgia, where they suffered many casualties.

This Way We Were story was first published June 28, 2004. By Greg Olson - golson@civitasmedia.com