The original St. Francis de Sales Church was constructed in South St. Louis by the city's German immigrant community in 1867-1868. This first church was destroyed by the St. Louis tornado of May, 1896, and the surviving church basement served as the church until 1908. The local architectural firm of Klutho and Ranft constructed a new church in the German Gothic Revival style, with an imposing 300-foot steeple, so that it is now known as the "Cathedral of South St. Louis" (though it is not a cathedral, per se). However, in the 1960s and 1970s, the neighborhood began to deteriorate due to outward flight to the city's suburbs, and by 2005, St. Francis de Sales was scheduled to be torn down and sold. However, in July 2005, the church building and campus were saved when they were given to the Institute of Christ the King Sovereign Priest. The church building was listed in the National Register of Historic Places (NRHP) in February, 1978. 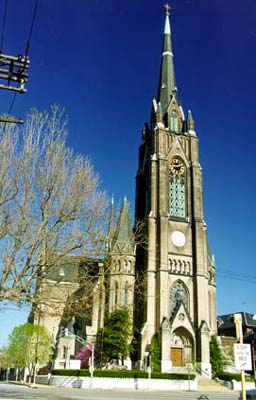 Another exterior view of the church 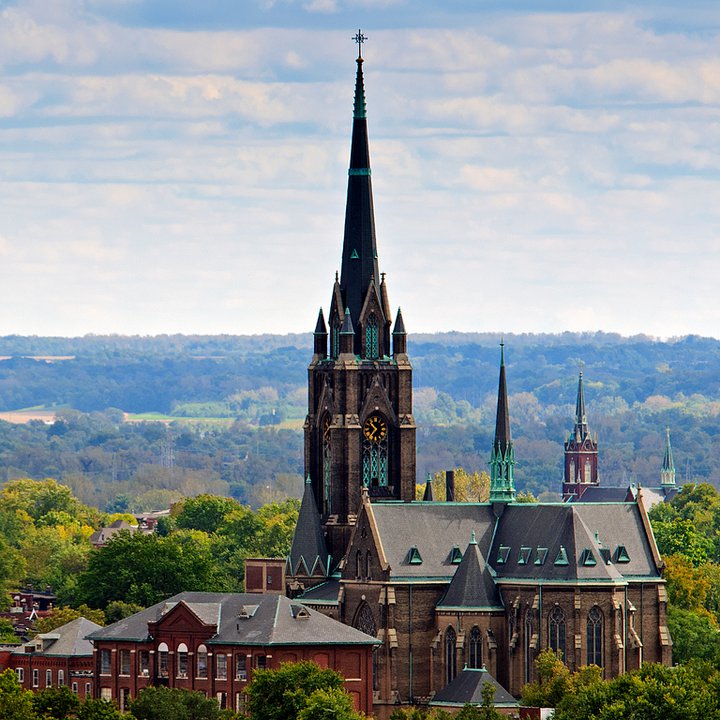 The nave of the church's interior 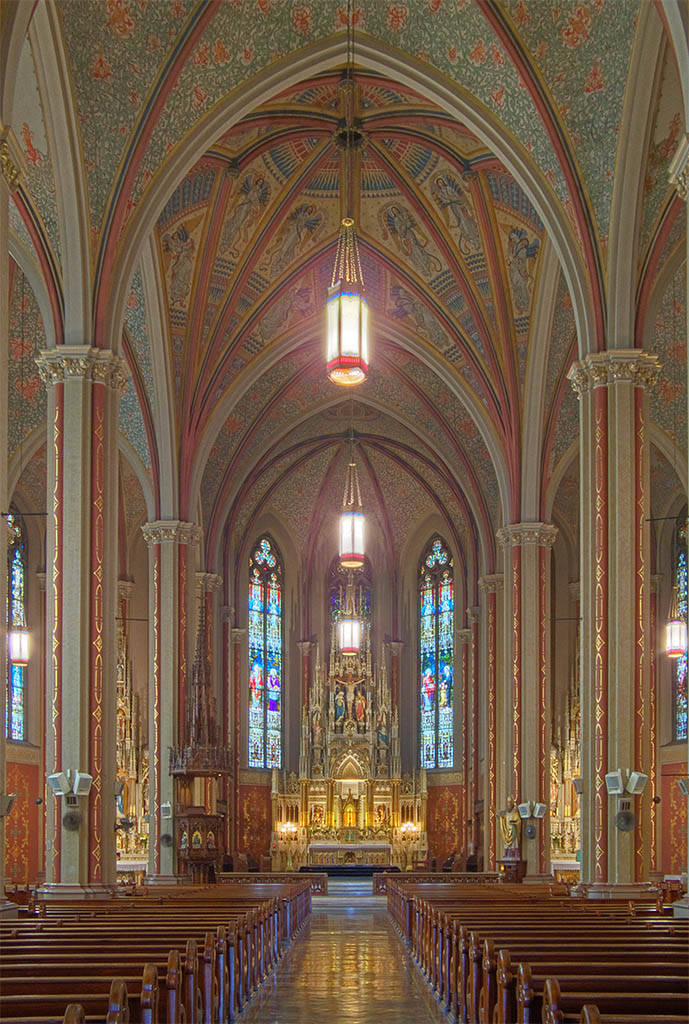 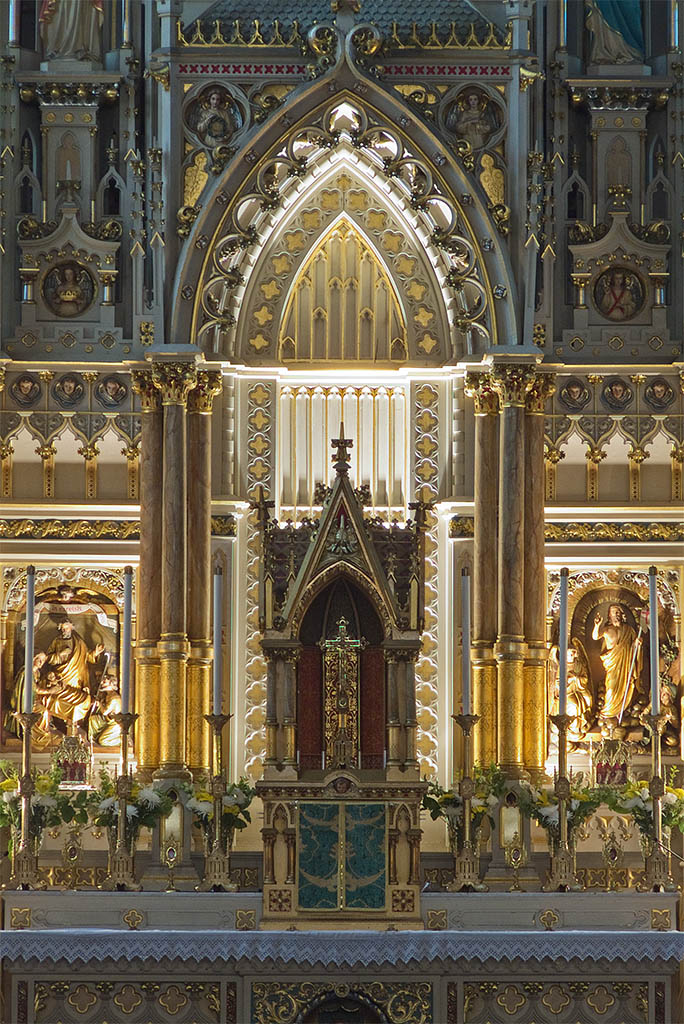 A crucifix in the church's interior 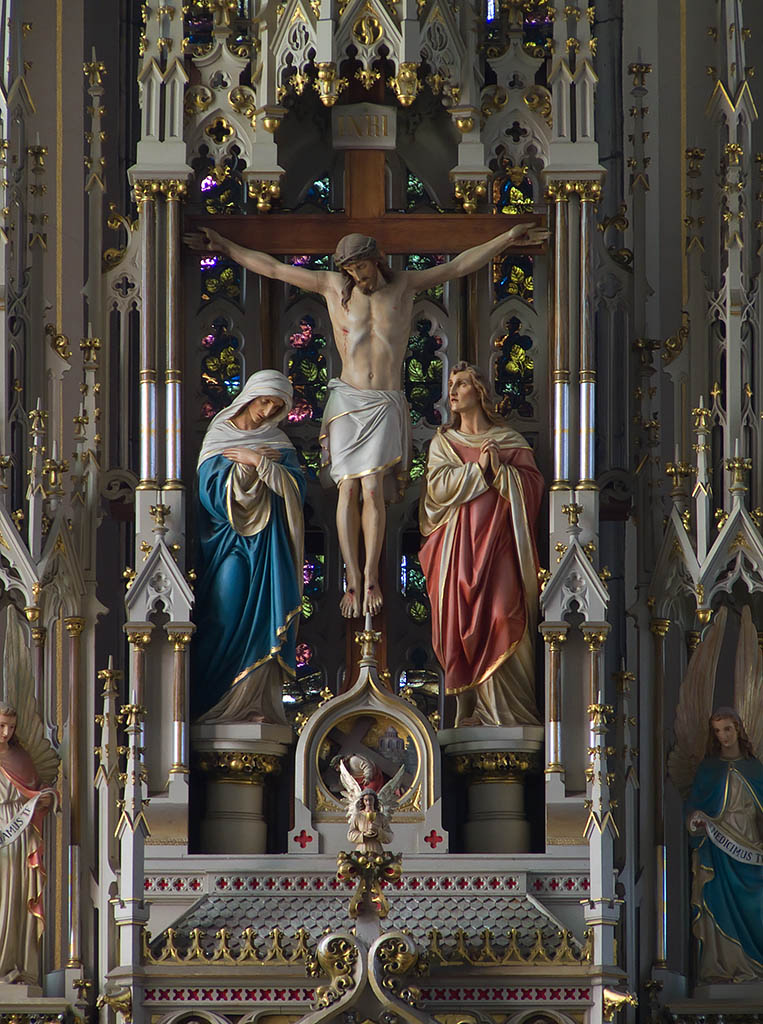 In 1867, seven St. Louis dairymen of German descent, parishioners of Sts. Peter and Paul parish in nearby Soulard, purchased a tract of land at the corner of Gravois and Ohio with the intention of building a brand-new church, for the then-exorbitant sum of $12,850. The church was named after Francis de Sales, a 17th Century Bishop of Geneva, who had been canonized in 1665 and was later to be made a Doctor of the Church in 1877. While the church was still being built, the first Mass was celebrated there during Christmas of 1867, and it was dedicated in May of the following year, when it already had 800 members.

In 1894, the church's pastor planned to build a huge, new 350-foot-high church made of expensive cut stone, but it was decided that this was too costly for the parish's budget, and only the basement of the new church was built, pending a final decision. But then the Great St. Louis Tornado of 1896 intervened, completely destroying the original church. After the death of the pastor, the new pastor decided that the new church would be made of cheaper materials -- brick and terracotta -- rather than stone. The building was designed by the distinguished German-American architect Viktor Klutho of the St. Louis firm of Klutho and Ranft. Construction began in 1907, and a year after it was dedicated in November, 1908, the parish newsletter proudly declared that the front portal was an exact copy of that of the Cathedral of Munich.

According to the church's NRHP Nomination Form, the design "appears to be a combination of mid-thirteenth century Gothic forms and nineteenth century adaptations of these same forms." The nave of St. Francis de Sales is modeled on that of a German medieval hall church. The styles of the interior elements encompass a period of three centuries: the twelfth, thirteenth, and fourteenth. Its highly distinctive stained glass windows were created by Emil Frei, Sr., St. Louis's premier stained glass artist at the time. Frei was an "accidental" resident of the city: he had emigrated from Germany to San Francisco, but became so homesick he decided to go back to Europe. On the way, he stopped to visit friends in St. Louis' German community, and became so enamored of that community that he chose to stay. The elaborate interior frescoes were painted by Fridolin Fuchs, another German immigrant.

By 1917, St. Francis de Sales was one of the largest parishes in the city, and during the city's 1930s-1940s growth years, the parish constructed both a grade school and a high school. The church itself was restored beginning in 1966, and in 1968, the local chapter of the American Institute of Architects named it one of the 62 most significant sites in St. Louis. However, by the 1970s the area's growth had long ended, as the remaining population slowly aged and new families did not arrive to replace them. In 1974, the high school closed, and the Parish Community Development Office, later known as the DeSales [sic] Housing Corporation (now an independent entity) was formed to deal with the social problems of the neighborhood.

In 1990, a church preservation fund was established. However, in 2005, just when it looked like the church would be torn down, it was given to the Institute of Christ the King Sovereign Priest. According to the Institute's website, the organization "operates in more than fifty places in twelve countries, where our priests focus on the care of souls in many different ways." A central practice of the Institute's churches is the use of the original Latin mass from 1962. (Practically all other Catholic churches today use the vernacular language of the communities in which they are situated.) Because it is part of the Institute, St. Francis de Sales does not serve a particular parish, but belongs to the Archdiocese of St. Louis. A campaign called Tradition for Tomorrow is dedicated to continuing restoration work on the century-old church.

At 300 feet in height, it is one of St. Louis' tallest buildings. The City of St. Louis has designated St. Francis de Sales Church as City Landmark #38. In April of 2017, the church won Art & Liturgy's "Church Madness" award for 2017 (a competition patterned on the NCAA Basketball Tournament's "March Madness"), as the most beautiful church in America, as voted on by thousands of Internet voters at the Art & Liturgy website.

"Who We Are - Get to Know Us." Institute of Christ the King Sovereign Priest. Access Date: 7/19/17. http://www.institute-christ-king.org/institute/who-we-are.