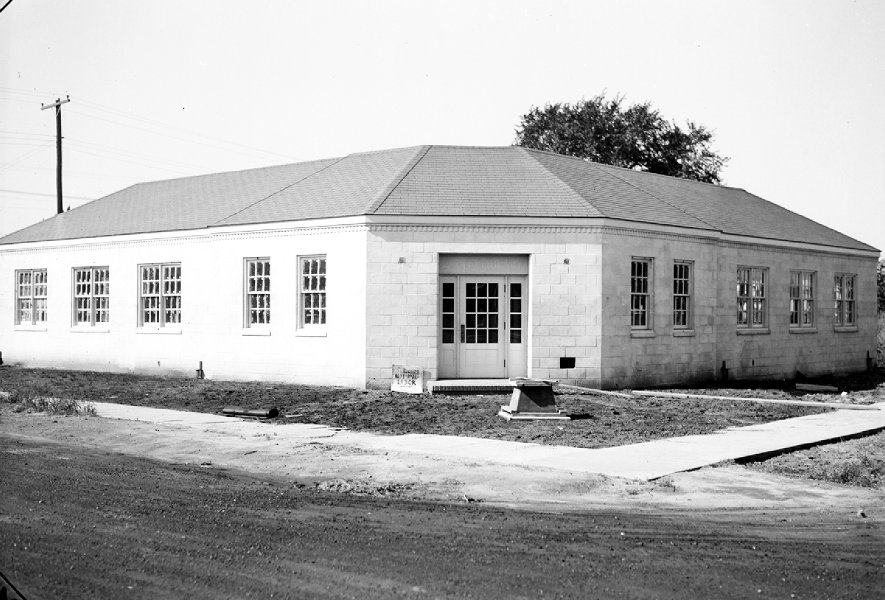 Construction of the Hazel Park Library, 1939. 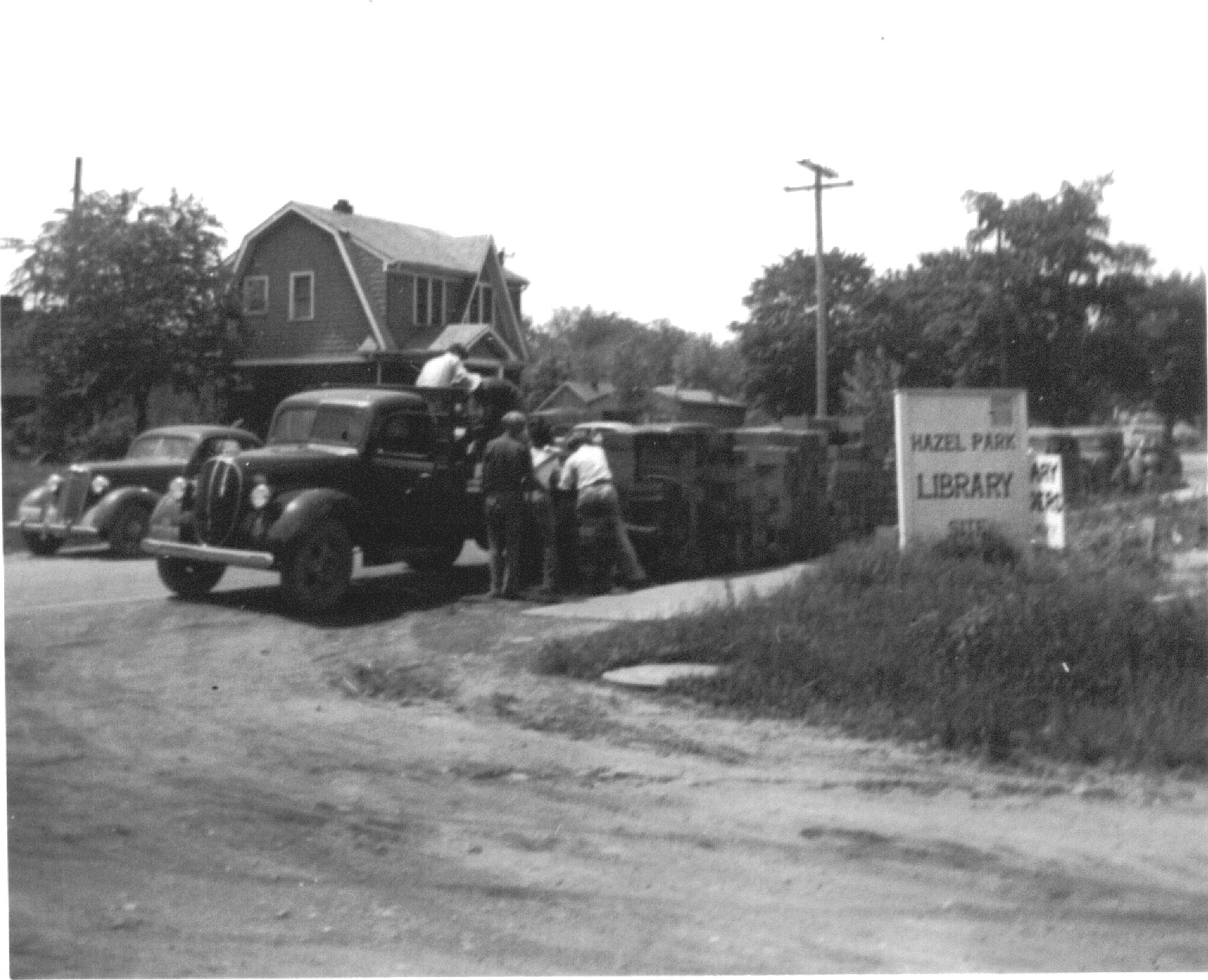 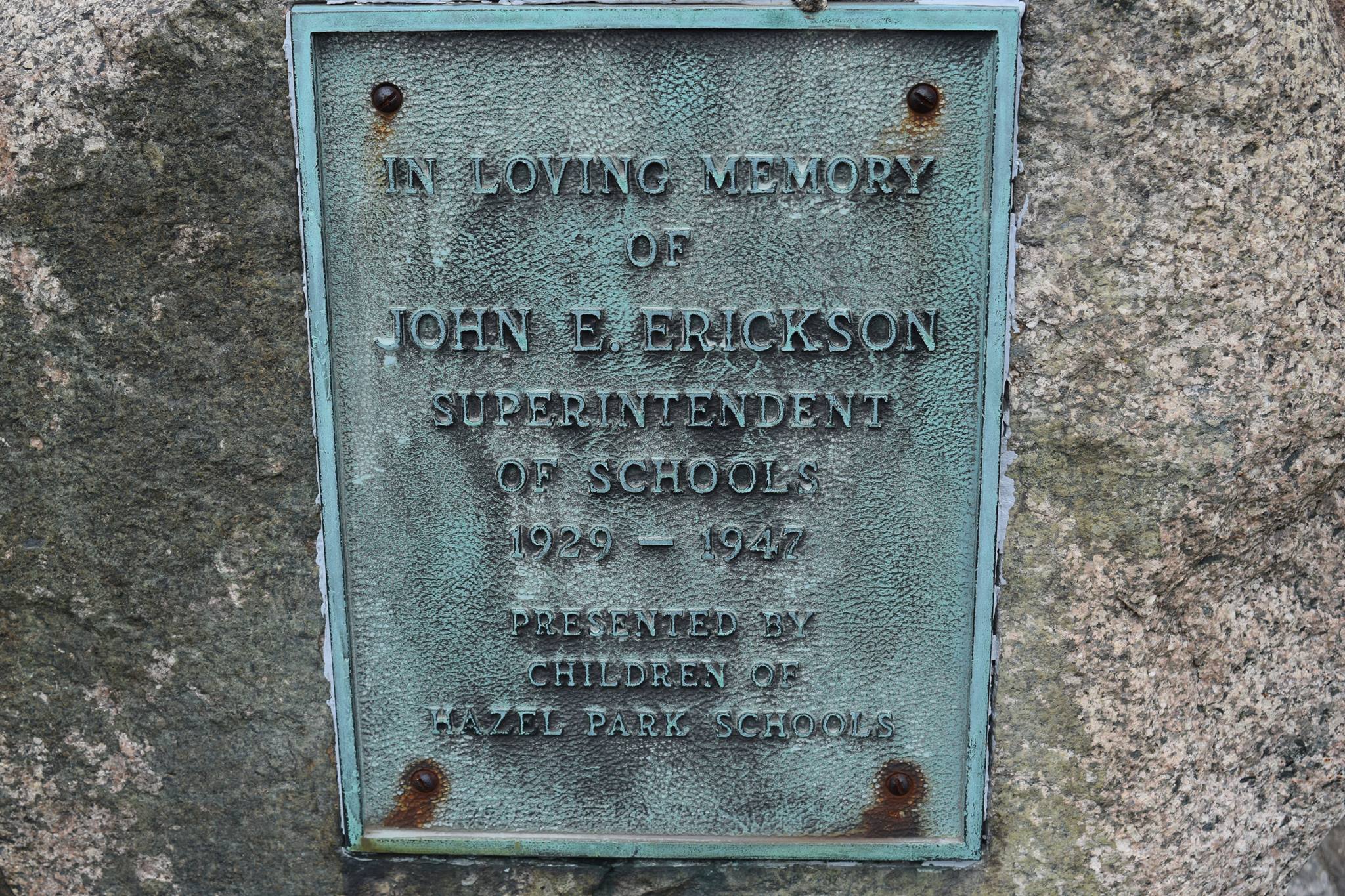 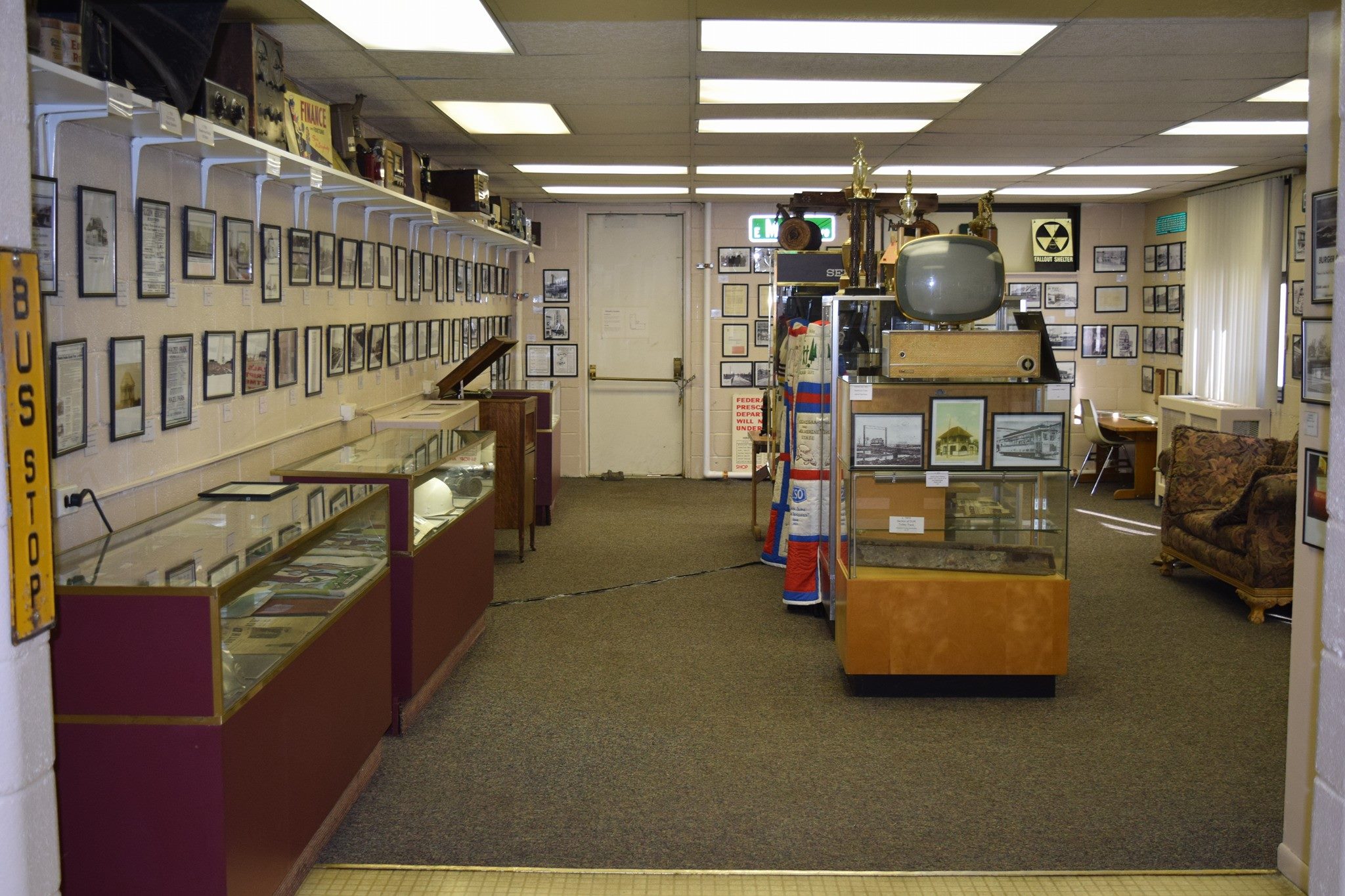 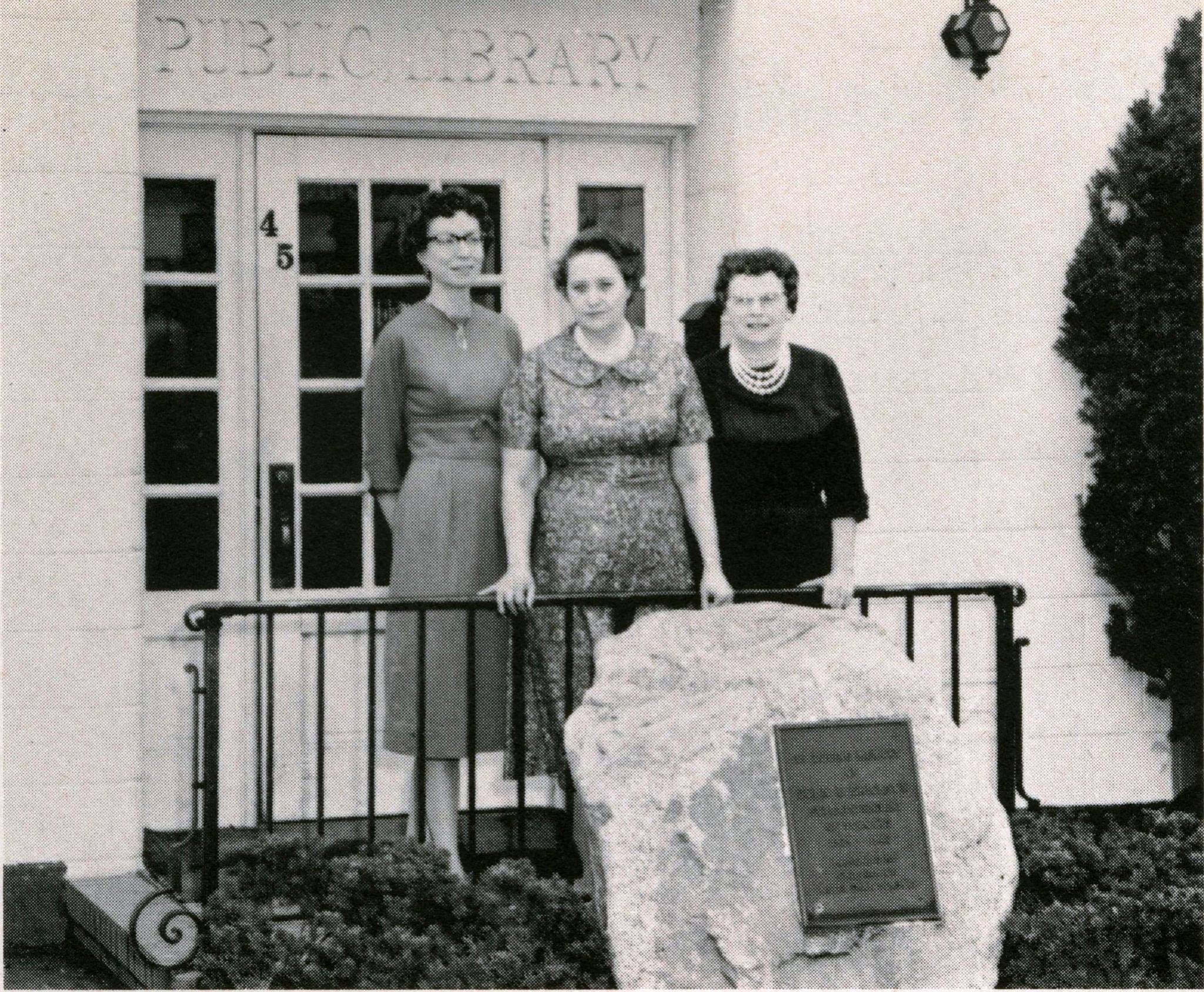 The Hazel Park Historical Museum is housed in what once was the John E. Erickson Memorial Library. The library was completed in 1940, and was the site of the first City Council meeting when Hazel Park was founded in 1942. The first Council meeting was held in the central foyer of the Library. An account of the ceremony held here, from the Royal Oak Daily Tribune, Feb 3, 1942 says: “The proceedings last night were carried out under the bright glare of the public spotlight, just as the council had promised. But it was more  than it had bargained for. The glare came from a group of floodlights erected for photographic purposes and was augmented from time to time by the flare of photographer’s flashbulbs. Under the intense illumination, the faces of the council members gradually turned a fiery red that was not due to embarrassment.”

The following is a description to the You Tube video attached to this site regarding the first Council Meeting in Hazel Park. Scenes are judged by the changing of the view in the film.
:
The City Council of Hazel Park held it’s first meeting on February 2nd 1942, at 9pm in the Hazel Park Library, which was renamed for it’s Founder John E. Erickson, school superintendent of the Hazel Park School District. Around 200 people were in attendance at this meeting, jammed in both wings of the library and standing along the walls. The meeting itself was held at the circulation desk of the library.
The following is an identifying guide to the scenes found in the film of this first meeting.
Scenes 1 and 2 : Lester Opliger, clerk of the township of Royal Oak, administers the oath of office to William Balla, constable, and John Dower, Justice Of the Peace.
Scene 3. Lester Opliger administers oaths to (from left to right) Dr. Ernest Bauer, William Chynoweth, Carl Graves, Clarence Adams Councilmen.
Scene 4,5,6 : Clarence Adams, William Chynoweth, Dr. Bauer signing?
Scene 7 : Oath of Office for Mayor John G. Campbell
Scene 8. : Mayor Campbell takes seat at table.
Scene 9 John Erickson, chairman of the Charter Commission proclaimed in what accounts said was a “brief and masterly manner” (HP Palladium)  ; “The Commission having completed it’s work, the meeting is now adjourned and the Charter Commission dissolved”. He  then turned the gavel over to Mayor John Campbell.
Scene 10: Unknown City Employee taking notes
Scene 11: John Erickson continuing speech
Scene 12: Charles Hayes, representative of Gov. Murray Van Wagoner presenting  the official signed City Charter to Council.
Scene 13 John Erickson shaking hands with Mayor Campbell.
Scenes 14, 15, 16 :Mayor Campbell gives his brief inaugural address:
“We have been informed that this is the largest community ever to go from a township to a home rule city in the history of Michigan. This condition gives your new city government more problems than any other community of similar size ever had.
We know you realize the difficulties under which we must work. We believe that you will be both patient and considerate with our efforts to bridge the gap between  city and township government.
May we strive together to plan a program for economical government with community improvements that will some day make us look back to this occasion with much satisfaction”.
Scenes  17, 18, 19 Council, Justice of the Peace and Constable take a bow.
Scenes 20 21 22 23 24 Maurice F. Cole Judge Advocate of the Michigan Department of the VFW presents flags in behalf of VFW Post 3140 Hazel Park. Unknown person speaking, possibly a VFW member, perhaps of the war that was caused by the events at Pearl Harbor just under 2 months before.
Scene 25 Rev Paul Czemanske presented council with a Red Cross Flag, given in recognition of the city’s generosity in doubling it’s war relief fund quota.
Not On Film - Everyone in attendance singing one verse of “America”
Scene 26 Rev Paul Czamanske delivered the Invocation as follows:
“Dear Heavenly Father, as citizens of the new City of Hazel Park, we intercede this evening with Thee for our Mayor and Councilmen elect. As Thou hast seen fit to establish in our midst lawmaking powers dedicated to uphold both order and liberty, so do Thou bless and preserve it’s institutions. Grant that our new city officials may ever be mindful of the welfare of all the residents of Hazel Park. Grant that they be guided by motives of unselfishness directed to the common good. Lead us to prove our gratitude in devotion to the welfare of our beloved city, state and nation, in careful use of our own privileges of ballot and discussion, in personal thought for the improvement of our own community, and these United States as a whole. These blessings, grant us, dear Lord, for Jesus’ sake, Amen.”
Scene 27  Rev Donald B. Kuntz, pastor of St. Mary Magdalen Catholic Church delivers the Benediction.
Scene 28, Council shots.
Scene 29 Royal Oak Mayor Fletcher R. Renton congratulating City Council on becoming a city, and offering advice and counsel.
30-39 Council Business scenes, council business as follows.
Clarence Adams elected Mayor-Pro Tem
Appointed John R. Hall, former Royal Oak Twp. Supervisor as assessor at 210 Dollars a month.
Appointed Councilman Dr. Ernest Bauer as acting City Clerk and councilman Carl Graves as acting treasurer, without pay.
Appointed Mayor John G. Campbell, councilman Graves, George C. Westfall, Rev. Paul W. Czamanske and Hall as Supervisors
Enacted 3 ordinances regarding Building Codes, Electrical Codes, and Dog licensing.
Set the 2nd and 4th Tuesdays as  Council meeting days, at 8PM.
Authorized employing clerical assistants at a weekly salary of $27.50 each.
Designated the 2 polling places at John R and 10 mile and Meyers and John R, as well as the Library, City Hall and the water dept. as official posting places for notices. The Palladium becomes the temporary medium for publication for the city.
Authorized the city to enter negotiations with Royal Oak Township for sub-leasing of their offices at 75 dollars a month
Spent 105 dollars for tax roll forms
Spent $898.96 for bills incurred by the Charter Commission
Scene 40 Public Discussion Mayor of Royal Oak Fletcher Renton and Archie Mc Ardell
Scenes 41-42 Outside shots of Court and Council Offices, with Council and Police
Scene 43 Same as above with City Staff
Scene 44 Inside City Hall, Mayor and Council and staff
Scene 45 Outside Claramay’s Restaurant, Possibly Claramay
Scene 46 Inside Police Dept, 3 policemen.

First Sunday of the Month, from 12 PM to 4PM, Third Thursday from 6PM to 8PM, or by appointment.