The oldest African American congregation on the West Coast, St. Andrew's AME Church was organized in 1850- the same year that California became a state. The congregation began in the home of early African American settlers before securing their own church, which was visited by Black leaders such as W.E.B. DuBois. The current chapel was constructed in the 1950s. 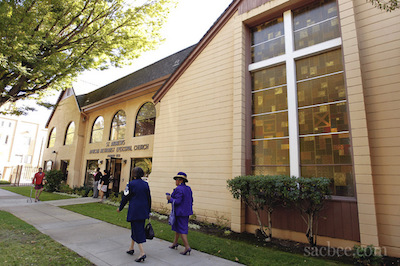 St. Andrew's began simply in 1850, the same year that California gained statehood. The first parishioners met in the home of Daniel Blue, a former slave from Kentucky who arrived in Sacramento the year before. Blue, along with George Fletcher and Barney Fletcher, founded the church, the first AME church on the west coast. Later that year, members of St. Andrew's petitioned the Indiana Conference to be admitted to the African Methodist Episcopal Conference, which was accepted. At that time, the church was known as Bethel AME Church, but the name was changed to St. Mark's shortly the church's acceptance into the Indiana Conference.

Many years later in the 1920s, the church's integral role in Sacramento's African American community was illustrated when W.E.B. DuBois visited the city and insisted on speaking at the church. The current building was constructed in 1951. The site of the original church building at 715 Seventh Street, is now used for parking, but a historical marker identifies it as the site of the original structure.