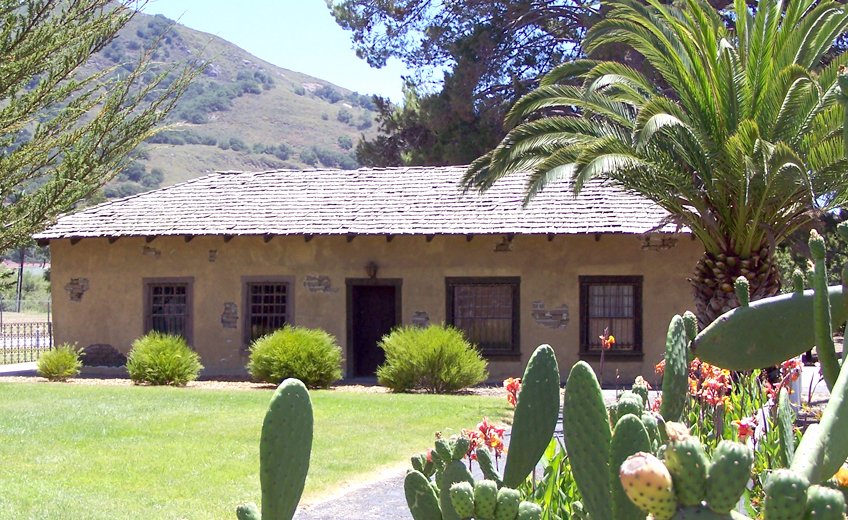 The Hollister Adobe, constructed in the 1830’s as a family home, stands today in a quiet corner of the Cuesta College San Luis Obispo Campus.

Before Cuesta College existed, the place where the Hollister Adobe sits was part of Camp San Luis Obispo, and long before the college, the military base, and the adobe, the area was home to the Chumash people for thousands of years.

The adobe and the land on which it stands tell a compelling and personal history of California and its people.

The original adobe consisted of three rooms molded by Jose Guadalupe Cantua in the 1830’s. He was born at Mission San Juan Batista in 1786. Cantua served as a soldier within the missions of California. By the 1830’s, Cantua was in his mid-60’s and was ready to retire. A Mexican citizen, Cantua applied for a Mexican Land Grant and claimed just over 4,000 acres of what had been the 'community property' of Mission San Luis Obispo and called it Rancho San Luisito.  Cantua lived in the adobe until 1859 when Captain John Wilson purchased the property. Guadalupe then moved to Cambria.

John Downes Wilson, better known as Captain John Wilson, was born in Dundee, Scotland in 1798. By the time he was 30 he was master of the Thomas Nowlan, a ship trading in hides and tallow on the California coast. After his sailing days he became a land holder and cattle rancher, ultimately becoming one of the biggest land holders in California, as well as the first treasurere of San Luis Obispo County. Wilson bought Rancho San Luisito in 1859; after his death in 1861, Rancho San Luisito was passed down to his stepson José Antonio Romualdo Pacheco, Jr. Pacheco was a California politician and diplomat. He was elected and appointed to various California state and federal offices and posts throughout his more than 30 year career, including serving in the California State Senate, as the 12th governor of California, and three terms in the United States House of Representatives.

Brothers Joseph and William Hollister traveled from Ohio to California in the 1850’s. In 1866 at the end of the Civil War, Joseph's wife Ellen purchased Rancho Canada del Chorro from Captain Wilson’s sisters, and Rancho San Luisito from José Antonio Romualdo Pacheco, Jr., John Wilson’s stepson; the two properties were known as the Chorro Ranch. Ellen died just a year after she purchased Chorro Ranch. Her son, John Hollister, inherited the property in 1877. That year, at age 21, he was elected the youngest Supervisor of San Luis Obispo County and at 23, he was elected to the California Assembly. John married Flora May Stocking of Morro Bay, and as children were born, the adobe expanded to 22 rooms of wood clapboard. The Hollister home was one of the more significant social gathering places in the county. Cold winters in 1889 and 1890, a two-year drought, and floods combined with the 1893 Depression cost John Hollister the home on Chorro Creek.

Swiss Italian immigrant Camillo Ghiringhelli met and married his wife Theresa at Mission San Luis Obispo.  He purchased the Chorro Creek property in 1907 when their eldest daughter Lillie was 11. Camillo passed away just before World War I. After the war, Lillie, now grown, married Nelson Hansen. They raised a son and a daughter in the adobe. The military took the property by right of eminent domain in 1940 with World War II looming.

Over the winter of 1941-1942, forty inches of rain fell as local contractors transformed Camp San Luis Obispo into a major staging area for the largest war ever fought. Major Stanley, the Camp Commander, ordered the removal of the adobe but John Hollister’s son, Hub, intervened. He convinced Major Stanley to leave the original three rooms of the adobe. In front of the adobe, the military placed an outdoor altar called the Shrine of the Centurion that provided comfort to some of the 50,000 men and women who passed through on their way to war in the Pacific.

In 1963, residents voted to create a community college district and some property of Camp San Luis Obispo, including the adobe, became part of the new Cuesta College. The first generation of Cuesta College students took classes in old barracks, among wandering cows and deep mud. The first restoration of the adobe was started in 1968, and in 1970 the adobe was named a Point of Local Interest by the State Historic Preservation Office. With the restoration complete, dedication ceremonies were held in 1973 and the adobe served as a museum housing Native American exhibits until the San Simeon earthquake of December 2003 damaged the adobe to the extent that it was no longer safe to enter. Cuesta College had the building closed and the exhibits were moved to storage.

In 2004, a fundraising campaign to restore the adobe at a cost near $400,000 was launched. The Hollister family donated $25,000 to begin the effort. Cuesta College has patched holes in the adobe walls, added rain gutters and trimmed overhanging trees to protect the roof from debris.

To preserve the adobe and return it to functionality, an extensive rehabilitation is required. Renovations could allow the adobe to become a unique venue for weddings, celebrations, BBQs, parties and other gatherings. Profits can be used to pay for annual maintenance of this historic property. The rehabilitation is expected to cost approximately    $1 million and includes: