Built in 1910 and Designed by James M. McMichael for Dr. Stephen S. Royster, the Royster House is one of the oldest and most well-kept landmarks in Shelby. McMichael was a famous architect from Pennsylvania who designed many houses and churches in Colonial Revival form. He designed many landmarks that stand to this day in counties such as Carrabus, Chowan, and Davidson county. Fun Fact: The Royster House the first building in Shelby to have running hot water. The two story, yellow brick structure of the Royster House is nestled in downtown Shelby directly across from the Shelby courthouse. The building welcomes visitors with local-run coffee shops and diners as well as small consignment stores.

A picture of the Royster building in the early 2000s 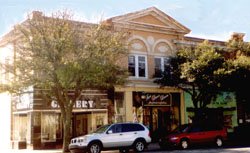 Dr Stephen S. Royster was a well known physician in Cleveland country in the early 1900s and also known for his ownership of a Gulf Oil Refining Company distribution center, which he acquired in 1925.1 Named after himself, the Royster Oil Company has served other companies such as BP, Chevron, and Exxon Mobile throughout North Carolina and South Carolina.2 To this day, Royster Oil Company markets chevron oil products and lubricants as well as installing and servicing fuel tanks in Cleveland country and Forest City.

The architect of the Royster building, James M. McMichael, designed over 900 churches and countless other buildings in his 50 years of work.3 One of his most popular churches was the First Baptist Church in Charlotte, which is known for its unusual Byzantine inspired domes and stained glass windows. According to the Biographical Dictionary of architects and Builders, The Charlotte Observer stated that the church was, "so striking in its unusual elegance that it will always be viewed with interest by strangers and passers by" and commented on the absence of a tall steeple that the, "useless and costly steeple is beginning to be a thing of the past."4