This historical marker commemorates the history of Franklin County, Virginia, which was chartered in 1785. An eastern Siouan tribe inhabited the region in the 1600s, and in the 1790s, settlers traveled by river and road. Tobacco was a leading crop in the early years of the area and Franklin County also became leading producer of dairy and a variety of agricultural staples. The county was also home to iron production where munitions for the Revolutionary Army were manufactured. The Washington Ironworks is the county's oldest landmark but the county might be best-known as the early home of educator Booker T. Washington. 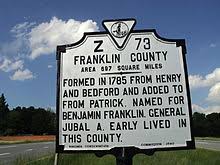 Franklin County was home to Booker T. Washington, one of the most influential African Americans of the late 19th and early 20th century. An educator and orator who created the Tuskegee Institution, Washington's birthplace is now a national monument. Notable Confederate General Jubal A. Early also was born in the county, and his home serves as a popular tourist attraction in the Red Valley community.

The Development of 2,880 acre Philpott Lake in 1953 and 20,600 acre Smith Mountain Lake in 1966 gave rise to Franklin county's current Designation as the "Land between the lakes and the Blue Ridge Mountains." It is an apt description for a remarkable place.

Franklin County is also home to a famous criminal episode involving the production and distribution of moonshine. Between 1930 and 1935, local still operators and their business partners sold a volume of whiskey that would have generated 5,500,000 in excise taxes at the 1920 tax rate. A federal investigation resulted in 34 people being indicted, including  fourteen moonshiners, leaders of one corporation, and nine government officials.