Constructed of Indiana limestone, the Civil Courts Building was designed in the neoclassical style with Greek, Egyptian and Oriental elements and consists of 13 floors, rising to a height of 386 feet. Though constructed in 1929 and dedicated the following year, the building remains the 8th tallest building in St. Louis. It is still active in its original function as a courthouse for civil litigation: it replaced St. Louis' landmark “Old Courthouse,” and currently serves the 22nd Judicial Circuit Court of Missouri. As a work of architecture, it has always been controversial: the legendary architect Frank Lloyd Wright, during a visit to the city, famously said of the building, "I neither like it, nor dislike it. I deplore it." Nevertheless, it remains popular for, among other reasons, the fact that it can be easily viewed as framed by the St. Louis Gateway Arch from the Illinois side. 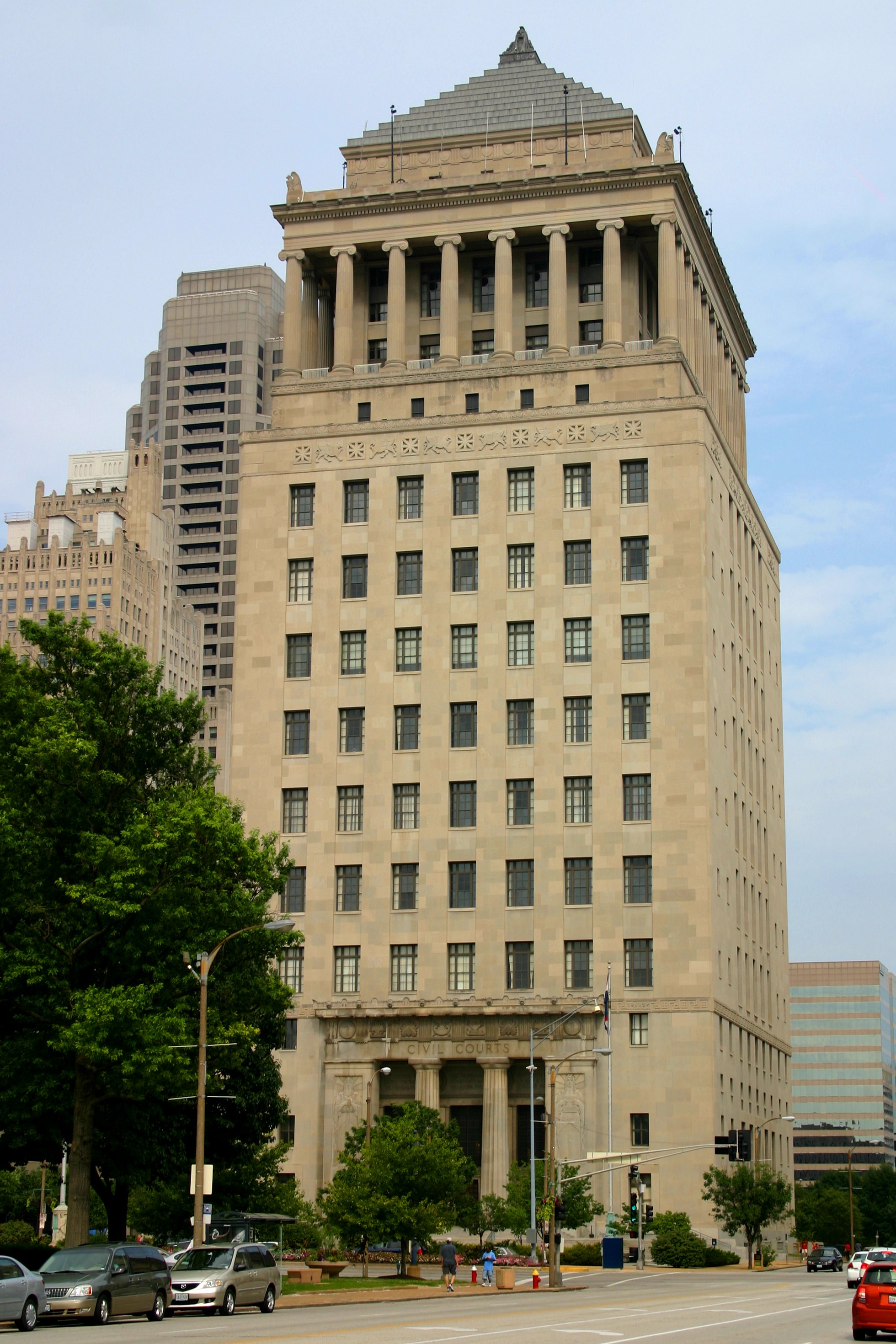 On February 9, 1923, the people of the City of St. Louis voted a bond issue for $87 million for extensive improvements, including the construction of a new Civil Courts Building. This building was designed by the architectural firm of Klipstein and Rathmann, which later created the St. Louis Post Office. The cornerstone was laid on February 3, 1928, construction was completed in 1929 and the building was dedicated and occupied in June 1930. The total cost of the project was $4,520,000.

For its first 12 floors, approximately 250 feet from ground level, the building resembles a typical office building of the period. But atop that base is an Ionic-style temple, inspired by the tomb of Mausolus (from whom the word "mausoleum" derives) at Halicarnassus in Greece, which is considered one of the "Seven Wonders of the Ancient World." A colonnade consisting of 32 Ionic columnns surrounds the building, eight on each side. Each columnn is approximately 42 feet high, 5-and-a-half feet in diameter and weighs about 65 tons. However, this Greek-style temple strongly contrasts with the Egyptian pyramid design directly above it, and there are said to be Assyrian and Babylonian elements in its design as well. The building has been called "the city's most controversial architectural medley."

At the very top of the building are two aluminum sculpted figures, griffins or sphinxes, facing east and west, each with the body of a lion, the wings of an eagle and the face of a woman. These were designed by Cleveland-based sculptor Steven A. Rebeck. Both the sculptures and the Egyptian roof can serve as lightning rods for the steel-skeleton building during storms. The sculptures, which measure 20 x 12 x 12, are hollow, and access to their interiors (preferably not during thunderstorms) can be gained through the base of each. At Chestnut Street, a memorial flagpole with a sculptured stone base, designed by Victor S. Holm, commemorates veterans of the Spanish-American War.

Since 1991, extensive renovation has been carried out on the building, in order to, as the renovators describe it, create "The Courtroom of the Future," without altering the original architectural design. This includes the renovation of the main lobby and of the 12th floor promenade to permit secure public access, and the renovation and addition of new prisoner holding cells.

On the occasion of the St. Louis PrideFest 2016 in June of that year, the top (Ionic temple) portion of the building was lit up in rainbow colors, at a cost of over $15,000, and with the permission of both the court system and the city. This display included 49 purple lights at the top of the structure to honor the victims of the Pulse nightclub shooting in Orlando, Florida.