Located on the campus of the United States Naval Academy, this monument commemorates the servicemembers who participated in the First Barbary Wars. The First Barbary War was fought off the Mediterranean coast of Tripoli and the shores of Derne between 1801-1805. The seafaring battles were fought by Tripolitania, Morocco on one side and The U.S., Sweden, and the Kingdom of Sicily on the other. Tripolitania at the time was three separate provinces containing Tripoli, Algiers, and Tunis. The United States started to intervene when pirates from the Barbary States seized American merchant vessels taking their goods and holding the crew members for ransom. President Thomas Jefferson refused to pay the ransom to the pirates and thus started our involvement in the First Barbary Wars.

This drawing depicts the USS Enterprise fighting against the Tripolitan polacca Tripoli by William Bainbridge Hoff, 1877. 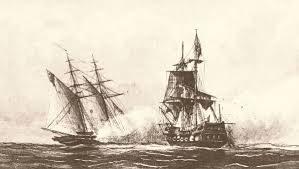 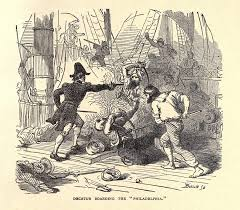 The naval forces that were included in these wars included 12 frigates, 4 schooners, 3 brigs, and 1 ketch altogether throughout by the U.S. There were also three frigates from Sweden as well as a few hundred Greek and Arab mercenaries sent from the Kingdom of Sicily. Then on the side of the pirates there were between 11 and 20 gunboats and about 4000 soldiers is the most accurate estimate of their forces. There were 35 killed and 64 wounded U.S troops, and an unknown number of Swedish, Greek, and Arab troops. Then on the side of the pirates there were an estimated 800 dead, with 1200 wounded at Derne plus the men lost in naval excursions.

In October of 1800 the Tripolitan pirates took control of the American vessel the Catherine. After some deliberation between the pirates and the captain of the ship they decided they would ask president Jefferson for ransom money and gave him six months to reply or they would declare war on the U.S. Then later Jefferson sent a letter to Pasha Karamanli (Tripolitan pirate leader) stating he was sending a squadron of ships into the Mediterranean for observation. Then Jefferson decided not to pay the $225,000 ransom in the first letter and on May 14, 1801 Yusuf Karamanli instead of waiting declared war on the United states. The squadron that had already been sent to observe had been informed in early July when reaching Gibraltar that they were now at war.

In 1803, Tripolitan pirates captured the Philadelphia intact after it ran aground on a coral reef as it patrolled one of Tripoli’s main harbors. William Bainbridge, all officers, and the crew were taken as hostages and held on the mainland. The Philadelphia ended up being used against American ships when it was anchored and used as a gun battery. After a myriad of blockades and raids, and under threat of continued bombardments, as well as a plan to restore his deposed brother to the throne Yusuf Karamanli signed a treaty. The treaty stated that All Americans held by the Tripolitans will be released as well as all Tripolitans captured shall be released and a sum of $60000 shall be paid for the American prisoners being held.

Leiner, Frederick C. To the Walls of Derne: William Eaton, the Tripoli Coup, and the End of the First Barbary War. Vol. 82 Society for Military History, 2018.