1765 home in coastal Lewes, Delaware that bares the scars of the town's bombardment by the British Navy during the War of 1812. 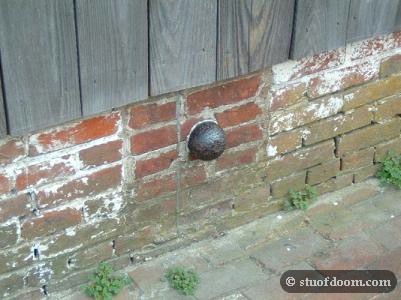 Originally referred to as the Rowland House, this was the home for Gilbert McCracken and David Rowland, Pilots for the Bay & River Delaware Company.
The town of Lewes was bombarded by the British Navy for two days (April 6-7 1813). Gilbert McCracken and his son Henry were at the time volunteers for the local militia set to defend the town from possible invasion. The house suffered damage as the British Navy shelled one of the town's two forts erected to protect the town. The fort was built in front of the house. The Park is now called the War of 1812 Park. Visitors today can still see a cannonball still embedded in one of the walls facing the coast. The house later served as a restaurant, laundromat and Mayor's office.
The house was saved from demolition due to the care and foresight of the town folk. They wanted to preserve Lewes' heritage and colonial look. They also wanted to preserve the house as a memorial to the town's bombardment. Meetings and funds and public awareness to the state government saved the house.
It is now a state park and serves as Lewes' Maritime Museum.
Lewes's visitor center claims that the cannonball shown above is the actual cannonball from the 1813 bombardment.