A series of civil rights protests occurred throughout this neighborhood in 1963. Lincolnville is now designated as an official historic district given its significance as an independent black community in the 19th century and its role in the modern civil rights movement of St. Augustine. Local resident Robert Hayling worked with state and national leaders of the NAACP to organize protests against the continued existence of segregated schools in 1963. He began by asking the President of the United States to withhold his recognition of the 400th anniversary of St. Augustine's foundation unless the city's schools followed the law and integrated their schools as required by the 1954 Supreme Court decision in Brown v. Board. When his efforts failed, Hayling contacted leaders of the Southern Christian Leadership Conference (SCLC). The SCLC responded by appealing to members to come to the city of St. Augustine for demonstrations in March, 1964. By the end of one week of protests, police had arrested hundreds of demonstrators. In early, June Martin Luther King Jr., came to St. Augustine and took part in a sit-in at Monson's Motor Lodge. These protests brought attention to the widespread existence of segregation in St. Augustine and together with other protests throughout the nation, hastened the passage of the Civil Rights Act of 1964. 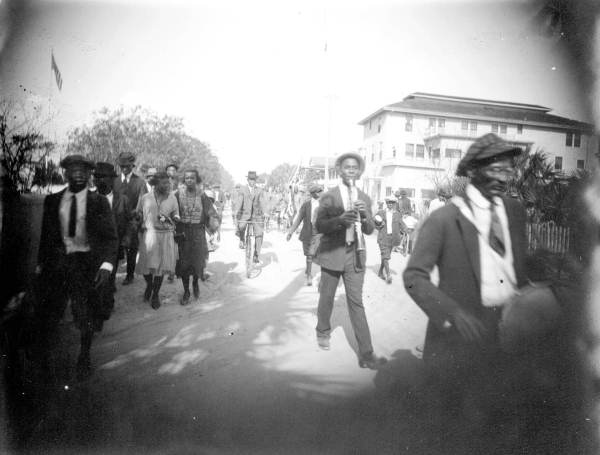 Lincolnville is a subdivision of St. Augustine that was established as a community for newly-freed slaves in 1866. Today, the historic district includes 140 acres and includes the largest assortment of Victorian-Era houses in the city. Prior to the establishment of Lincolnville, African Americans lived both as slaves and as free men and women of color. In fact, African Americans were present at the founding of St. Augustine and were present both as slaves and free people during the Spanish colonial period.

In the 18th century, the area that would become Lincolnville was a mission community inhabited by European missionaries and members of the Pocotalaca and the Palacia tribes. Following the settlement of the Europeans the land eventually became the sites of plantations and orange groves. The area that came to be known as Lincolnville came into existence around 1866 when former slaves began settling in a three-block area that they called “Africa”. Within twenty years the community of "Lincolnville" boasted several businesses as well as schools and churches.

In 1964, Dr. Martin Luther King Jr. and Reverend Ralph Abernathy took part in a major civil rights demonstration in Lincolnville that coincided with the celebration of the 400th anniversary of the founding of St. Augustine. African Americans hoped that the city would recognize that their desire to receive federal funds to pay for the celebration conflicted with the segregated nature of the event and the continued existence of separate schools in violation of the 14th Amendment to the Constitutions. Lincolnville dentist and NAACP leader Robert Hayling, protested"that such a rigidly segregated city should not receive federal assistance for the celebration.”

White city leaders ignored these protests until they feared the might mar their planned celebration. Meanwhile area chapters of the Ku Klux Klan began harassing members of the black community that were participating in the protests. A FBI report reveals that Sheriff L.O. Davis indicated plans to partner with Klan members to "help control Black demonstrators.

Hundreds participated in the protests against segregation. Although the protests were nonviolent, local police imprisoned so many participants that local jails were filled beyond their capacities. Given the attention on the 400th anniversary of the protests, the protesters succeeded in gaining national attention.

Lincolnville saw significant out-migration following the end of the civil rights movement, as residents were able to live in many other parts of the city. Today, the Lincolnville Historic district reminds residents of the importance of this community during the Jim Crow era and its role in ending segregation.