The Millard House, also known as "La Miniatura," is a textile block house designed by Frank Lloyd Wright and built in 1923 in Pasadena, California. This home was the first of Wright's four textile block houses, which includes the Ennis House (Los Feliz-Los Angeles), the Freeman House (Hollywood), and the Storer House (Hollywood). Wright was commissioned by Alice Millard, a rare-book dealer who commissioned Wright to build an earlier home for her in the Highland Park suburb of Chicago in 1906. 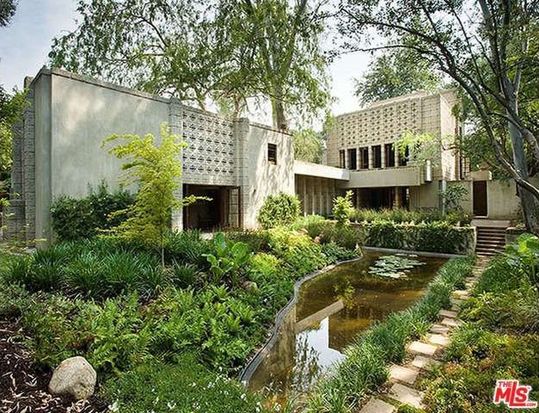 The Millard House, or "La Miniaura," was the first of four structures designed and built by Frank Lloyd Wright in the Los Angeles area between 1923 and 1924 using "textile blocks."  Turning to new materials, Wright wrote that he would "build with concrete blocks as they were the cheapest...thing in the building world."1  He had just opened an office in Los Angeles in January 1923 in West Hollywood after completing work on the Barnsdall home, Hollyhock House.

La Miniatura rests on three levels, with a double-height living room. It occupies 4,230 square feet and has four bedrooms, four baths, kitchen, living room, and a formal dining room. A studio was added in 1926, designed by Wright's son Lloyd.

Today, the Millard House remains a private residence. There are no tours and the owners shun visitors. However, you can drive by or park and walk by the home and still see from the street the genius of Frank Lloyd Wright.

Not open to the public, private residence.