Williams Memorial Methodist Episcopal Church held the first observance of Father's Day at this location on July 5, 1908. The church is now Central United Methodist Church and offers several programs commemorating the first observance of a special service to honor fathers. The original service was designed to honor the memory of 362 men, most of whom were fathers, who had died in the previous December’s explosion at the Fairmont Coal Company mines in Monongah. The Monongah Mine Disaster left over one thousand children in the Fairmont area without fathers, and remains the most deadly mining accident in American history.

This marker from the WV Department of History and Culture was dedicated in 1985 and commemorates the first father's day service in the United States. 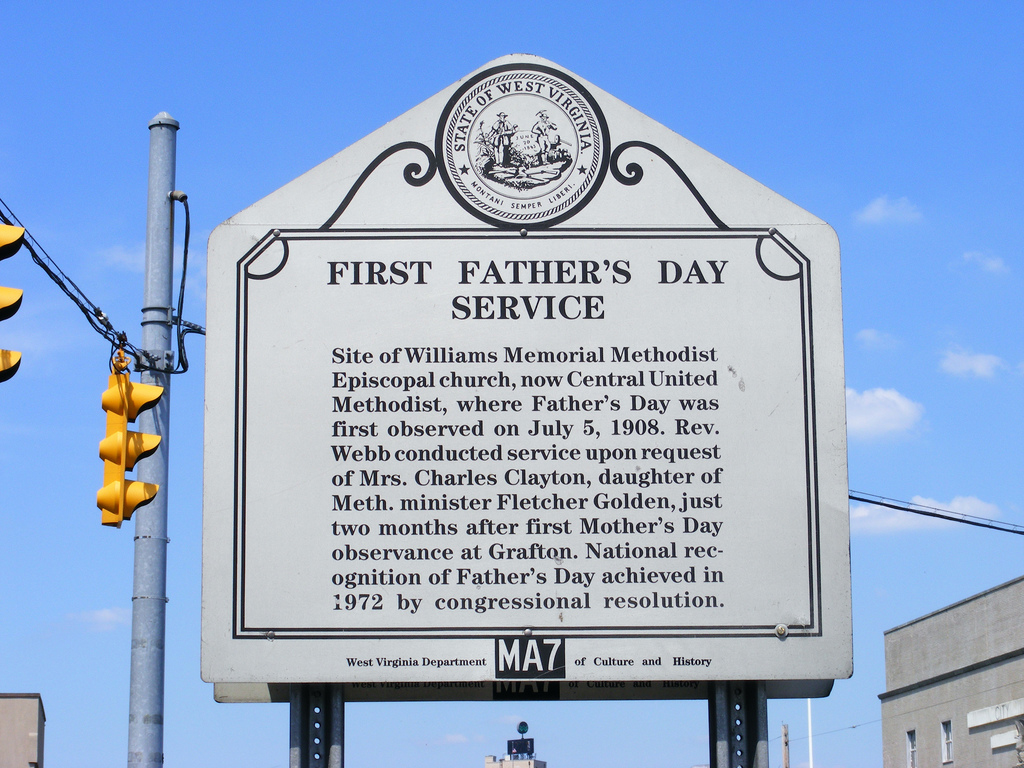 Learn more about the history of commercialism and American holidays with this book from Princeton University Press. 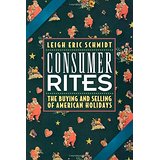 Although the first observance occurred in West Virginia, the holiday came into existence largely by the efforts of Spokane's Sonora Dodd, pictured here with Boy Scouts and a Civil War veteran. 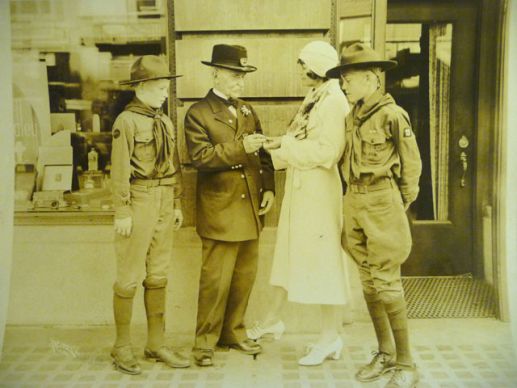 This photo shows the large crowd that gathered for the first observance of a special day for fathers in Fairmont on July 5, 1908. 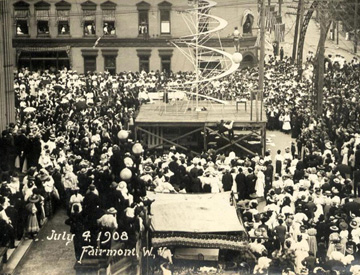 Following the Monongah mine disaster that claimed the life of her husband, Grace Golden Clayton organized a special ceremony to honor the lives of the 250 fathers who had perished the previous December. Members of the community responded to Clayton's idea by holding a solemn celebration of life-a ceremony that helped many of the residents find closure after months of often silent and lonely grieving. The community shared their sadness, but did not intend or take steps to create an annual tradition.

The second observance of a special day to honor fathers was also inspired by events in West Virginia, After hearing how Anna Jarvis had began a movement to honor mothers through a special day in their honor in Grafton, West Virginia, Spokane resident Sonora Dodd organized a service to honor fathers. Unlike the solemn event in Fairmont, the Spokane YMCA event was a joyous celebration and residents made plans to hold the event each year.

The governor of Washington supported the event with an official proclamation, but after a few years, inertia set in and few residents of Spokane continued to observe the day by the end of the decade. In 1914, President Woodrow Wilson declared Mother's Day to be a national holiday, but it was not until 1972 that Fathers were also honored by a national holiday.

In that interim, thanks to a renewed effort by Sonora Dodd during the 1930s, the day was again celebrated throughout communities in the Mountain West before becoming an officila holiday in many cities and states. In contrast to Anna Jarvis, who fought a losing battle against those who sought to commercialize Mother's Day, Dodd recognized that her success depended upon the support of retailers. During the Great Depression, these retailers were eager to enjoy a second day of sales that might approach Mother's Day, and many retail organizations pressed local and state governments to recognize Father's Day as an official holiday.

From the 1920s to the 1960s, proponents of Father's Day faced criticism from those who perceived the holiday as little more than a marketing campaign by retailers. Perhaps ironically, the growing commercial success of Mother's Day during these years raised awareness of the special day for mothers in ways that some Americans perceived as unfair. Equally pervasive was the story Sonora Dodd told about her own father, a Civil War veteran who after losing his wife, raised Sonora and her five siblings by himself. In 1966, President Lyndon Baines Johnson issued an official proclamation that designated the third Sunday in June as "Father's Day." Congress and President Nixon made this executive proclamation official with special legislation six years later.