Historically called the Brick House Farm, the Upper Wolfsnare House is a Pre-Georgian Vernacular house. Known mostly for history dating back to the 17th and 18th centuries. Previously owned by the Walke family of the Revolutionary War, it is now a three acre lived in home. The Wolfsnare House is on the National Register for Historical Places.

The house was left to Thomas Walke in 1759, and has been in existence ever since 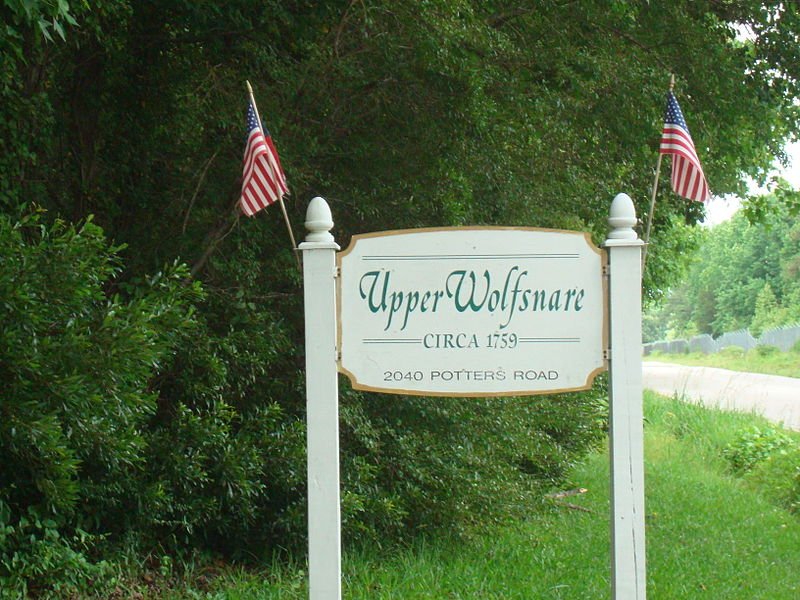 Map view of the Upper Wolfsnare 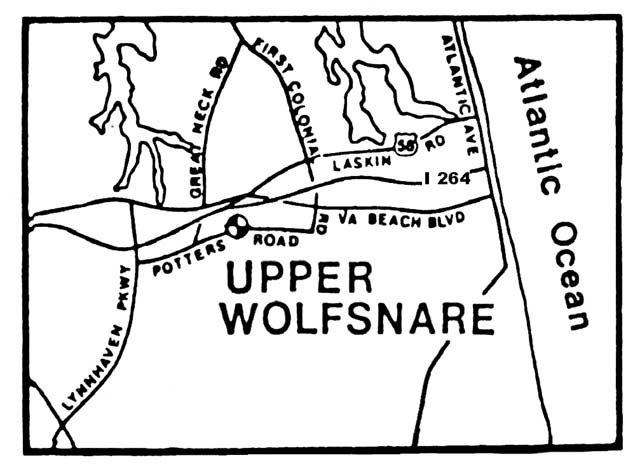 Upper Wolfsnare, with its rich store of plain paneling and it's unusual plan, stands as a fortunate survival of a localized house type once common in the Virginia Beach area. With its massive chestnut-oak trees flanking the house and its imaginatively landscaped environs, the property, thus shielded from the Norfolk-Virginia Beach Expressway to the north and the Oceana Naval Air Station to the south, retains much of its eighteenth-century appearance and stands in grim contrast to the strip development which envelops it.

Presently named for Wolfsnare Creek, which ran by it until the construction of the expressway. Upper Wolfsnare has historically been known as Brick House Farm. It received its current name in 1939. Major Thomas Walke, an early owner of the then-extensive farm, wrote a will in 1759 that left to his son, Thomas, the plantation and houses he described as being under construction. Upper Wolfsnare was probably one of these houses. The younger Thomas Walke, later known as Colonel Thomas, was one of the few Whigs in predominantly Loyalist Princess Anne County during the American Revolution. His heirs held the estate until 1822, when the 300-acre farm passed out of Walke hands and was sold to John Cornick for $4,500. It changed hands many times in the nineteenth and twentieth centuries, having had fourteen owners with eleven different surnames before it was purchased and given to the Princess Anne County

Upper Wolfsnare lies in an open, flat, marshy area near London Bridge in the city of Virginia Beach. With its open site, surrounded at a distance by trees, and with its two massive chestnut-oak trees flanking the house. The house is a two-story, Flemish-bond brick structure on a basement, featuring a gable roof, modillion cornice, and interior end chimneys with corbelled caps. To either end of the three-bay building later wings were attached. One of these, along with a later front porch, has been removed. The front (south) door opening was enlarged sometime in the first half of the nineteenth century, judging by the door, and at another time all of the original sash were replaced by two-over-two sash. These, in turn, have recently been removed, and late-eighteenth-century-type reproduction sash installed. Cellar windows on the front were blocked when the full-length porch was added. Those on the rear retain their original grills with horizontal wooden mullions. A central passage divides the house. Off this to the right, at the rear, is a triple-run stair. Two large front rooms, a dining room to the west and a parlor to the east, are the most elaborate in the house. A narrow room behind the dining room, which may have been a study, can only be entered through the dining room. Another room, as deep as the study but only half as wide because of the intrusion of the stair hall, lies behind the parlor and can be entered only through a door under the stair. Upper Wolfsnare is decorated throughout with raised paneling and wainscoting with minimal moldings, a treatment typical in the area. In the central passage are raised panel wainscoting, a molded cornice, and a plain stair with square newel and two square balusters to a riser as well as simple sawn brackets. The corner fireplace in the parlor is paneled to the ceiling. The segmental-arched opening with its sparse white plaster surround has a simple architrave frame. Over the opening is a large rectangular raised panel over a small one. The whole is flanked by a pair of tall, narrow panels over shorter ones. A paneled wainscot with a single small torus mold at the top, similar to that in the passage, is carried around the other walls. The same panel arrangement is used in the dining room. The fireplace, however, in the end wall, and to the right of the chimney breast is a closet with a single rectangular panel over it. A chair rail and cornice encircle the room. In the study, the segmental-arched fireplace has a horizontal rectangular panel over it and a vertical rectangular panel and a closet with a four-panel door to either side. A double-beaded chair board is carried around the room. All of the other rooms have segmental-arched fireplaces with small, horizontal, rectangular panels over them. Several have double-beaded chair boards.

Upper Wolfsnare is open to the Public on a limited basis on Wednesdays from Noon to 4 P.M. during July and August and for larger groups by appointment only.