Constructed in 1932, Chicago's twelve-story U.S. Custom House currently functions as an office building, mainly for the Department of Homeland Security (DHS). However, when it was built, it helped process an abundance of goods transported to Chicago, a city that served as a significant transportation and economic hub in the U.S. The building arose during the Great Depression as part of an overall move towards funding cities during the Great Depression, which included the construction of federal buildings. Daniel. H. Burnham's legacy can be seen in the building; his two sons and another architect who started his career with Burnham designed the building. 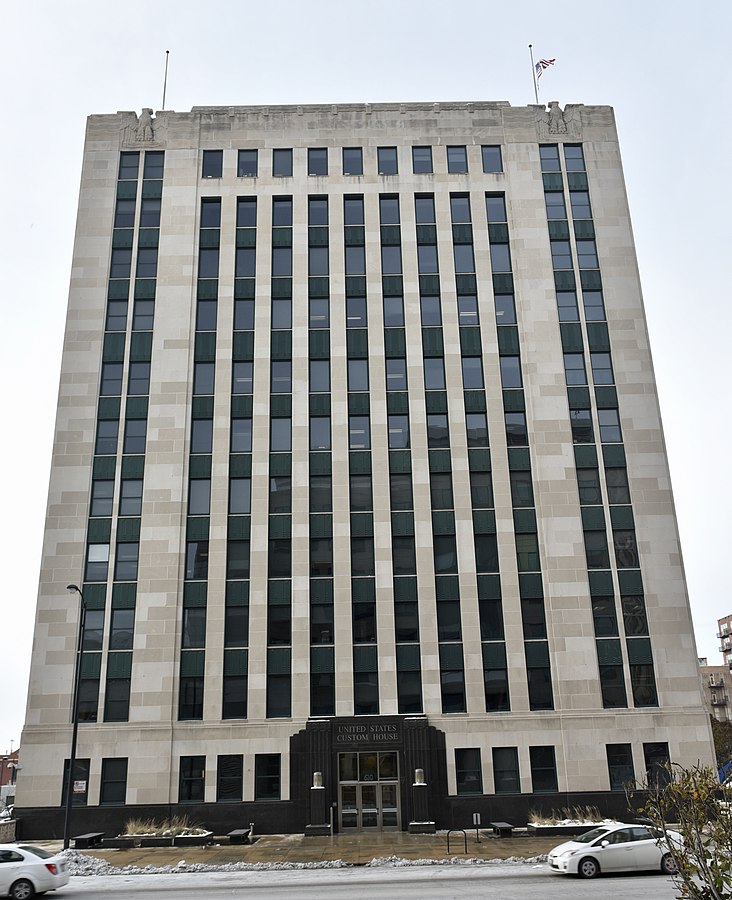 The United States Custom House, exemplary of the Classical Moderne architectural style in a federal building, was erected in Chicago during the 1930s and enlarged in 1940 by two prominent Chicago firms, Burnham Brothers, Inc. and Nimmons, Carr & Wright.  Projects created during the Great Depression, under the umbrella of the New Deal, included a new focus on urban construction including funding of private architectural firms to design buildings such as the Custom
Federal buildings designed between roughly 1915 and 1930 mainly enjoyed similar design; however, the genesis of the Great Depression ushered in an era of individually designed federal buildings, partly due to the Federal Employment Stabilization Act of 1931 which included $100 million for construction. As a result, by 1934, more than 300 private architecture and construction firms received funds from the program; approximately 1,300 new federal buildings were constructed in 1,080 communities.  Additionally, the Great Depression also served as the turning point in America when the federal government began pouring funds into urban regions, which had not been the case for much of the country's history.
As explained in the nomination form to the National Register of Historic Places, "By January of 1932, the U.S. Congress had appropriated $1.15 million for a new custom house, or appraisers stores building, and Ferry K. Heath, Assistant Secretary of the U.S. Treasury had selected the architects for the building. The firms Burnham Brothers and Nimmons, Carr & Wright, both of Chicago, were the associated architects. The site selected for the United States Custom House was located diagonally across the street from the post office under construction and was part of the large tract of land purchased from Marshall Field & Co. for the post office project. The new United States Custom House would handle all foreign packages that arrived at the post office and the port of Chicago."
The 1930s United States Custom House in Chicago replaced an inadequate 1890 facility.  Chicago's immense growth from 1890 to the 1930s included a tremendous influx of goods and materials, so The Retail Merchants Association and those representing large department stores joined with local legislators to lobby for funding the now historic U.S. Custom House as to process better the immense volume of shipments coming into the city from abroad.  The building included a train loading platform and numerous loading bays for trucks. Though built to support eleven stories, the 1933 construction resulted in a seven-story building: warehouses and processing centers comprised most of the first six floors, whereas the seventh floor had spaces for offices, labs, and a place for the hearing of appeals cases related to customs duties.
By the late 1930s, numerous federal agencies operated out of the building. Thus, in 1940, four additional floors and a penthouse were added to the top of the building.  Agencies in the building included the U.S. Coast Guard, U.S. Social Security Board, U.S. Department of Agriculture’s Bureau of Entomology and Plant Quarantine, U.S. Bureau of Lighthouses, U.S. Agricultural Adjustment Administration, and Federal Power Commission  The penthouse level included space for a shooting range, radio room, and assembly room.
Like much of Chicago's architecture, the building enjoys the influence of famed architect Daniel H. Burnham. His sons, Daniel H. Burnham Jr. and Hubert Burnham worked under him until his passing in 1912. The two sons inherited the business and subsequently went on to design many of Chicago's downtown skyscrapers and federal buildings, including the Customs House. Meanwhile, George C. Nimmons, a prominent Chicago architect for nearly half of a century, began his career as a draftsman in the Chicago office of Burnham & Root.
Though the U.S. Custom House, with its limited public access and its practical purpose, did not include as many ornate details into its design as libraries, post offices and other federal buildings built in the 1930s and '40s, the building is not entirely lacking in original design and artistic features. For instance, the main entrance includes abstracted pilasters and plinths with decorative lamps that flank the doors and geometrically-patterned, cast aluminum spandrel panels adorn each window of the upper floors.
In the end, to look at the U.S. Custom House is to peer into several aspects of Chicago's history, such as the legacy of Daniel H. Burnham, Chicago's position as a significant transportation and economic hub, and the focus on urban construction projects by the federal government during the Great Depression.  Today, the building mostly houses private and federal offices, primarily those used by the Department of Homeland Security, which points to yet another chapter in the city, and U.S., history.