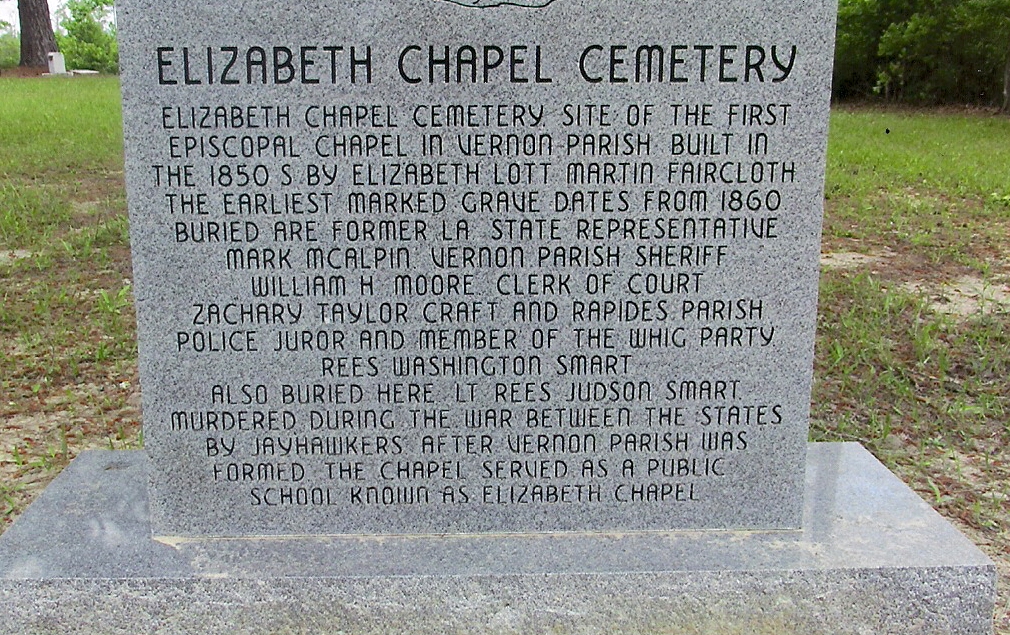 Cemeteries are great historical resources because they are reminders of settlement patterns.  Additionally, cemeteries are informational resources about historic events, religions, and genealogy.  Headstones serve as a listing of local citizens and show the unique population of a town. Cemeteries are commonly a peaceful place in which loved ones can reflect on memories of the deceased.  Many historic cemeteries are found in western Louisiana.  While several of these cemeteries are easily accessible, some of them are not.  Elizabeth Chapel Cemetery is one of the easily accessible and significant historical landmarks in Vernon Parish.  At this cemetery, the first Episcopal Chapel was built in the 1850s, and the oldest graves date back to the 1860s. Elizabeth Chapel Cemetery has existed longer than Vernon Parish, and is the site where many first-elected Vernon Parish officials were buried.

Elizabeth Chapel Cemetery, located north of Leesville on Jackson Road, is a quiet and neatly kept site, surrounded by pine and cedar trees.  When one approaches the entrance, there is a marker that describes the history of the cemetery, as well as the church and the school that were once located there. During the 1850s, the first Episcopal Chapel was built by Elizabeth Lott Martin Faircloth at the Elizabeth Chapel Cemetery.  Present day Vernon Parish was not established until 1871; therefore, the chapel was in Rapides Parish. Vernon Parish was still a part of Natchitoches, Sabine, and Rapides Parishes. 1

Vernon Parish was founded in 1803 due to the “Neutral Strip.”  After France sold its territory to America, tension rose between Spain and the United States.  Spain argued that its territory reached all the way to the Arroyo Hondo.  The United States believed that its territory should reach to the Sabine River.  As a result, there was a large strip of land left claimed by both countries.  Leaving the quarrel to their governments, General James Wilkinson, in command of American forces, and Lieutenant Colonel Simón de Herrera, commanding for Spain, agreed that neither side would allow settlers or a military expedition into the uncertain land.   This land became known as the “Neutral Strip,” or “No Man’s Land.” 2 Nevertheless, a variety of settlers, such as runaway slaves, criminals, and deserters from both armies, moved into the area.  For sixteen years, crowds of highwaymen caused travel through the area to be dangerous.  As a result, settlers avoided the area. 3 However, the Transcontinental Treaty of 1819 defined the western limits of the Louisiana Purchase, and people built new settlements.  By 1871, the population in the area had grown, so John R. Smart, who had served in the Louisiana House and Senate before and after the Civil War, introduced the act to establish Vernon Parish from parts of Natchitoches, Rapides, and Sabine Parishes. 4

Elizabeth Chapel Cemetery graves date back to the 1860s.  In this cemetery, many of the first elected officials of Vernon Parish and Rapides Parish are buried. 5 For example, Sheriff William H. Moore, who served with Company D 1st Louisiana Cavalry is buried there.  Moore entered the Confederate Army as a private, and during the war was promoted to corporal.  After his unit disbanded in March of 1865, Moore returned home, where he was elected sheriff of the new parish and became the chief law enforcement officer. Moore and many of his family members are buried at the Elizabeth Chapel Cemetery. 6 Dr. Wiley Kaufman Faircloth is also buried at this cemetery.   Faircloth was an assistant surgeon in the Confederate army and continued to practice medicine in the Leesville area until his death in 1911. 7

Visiting Elizabeth Chapel Cemetery is a wonderful opportunity to learn about how Vernon Parish was established.  Additionally, many of the parish’s first elected officials who contributed to developing the community are buried there.  The cemetery is in a quiet, well-kept area, and is easily accessible. Established before the parish, the cemetery remains significant to many members of present-day Vernon Parish.