This is the location of the "A Final Stand" civil war marker which is in Dinwiddie, Virginia on White Oak Road. The marker was erected by the Petersburg National Battlefield, National Park Service, and U.S. Department of the interior. The location of this marker is a part of where the “Battle of Five Forks” took place on April 1, 1865. The battle stretched across some other areas as well, but as the name suggests this is where the ending of the battle took place. On the marker itself, there is a picture of the Union cavalry attacking the Confederates and it indicates that the Confederates are retreating. The Confederate army put up their final fight here and the day ended in a victory for the Union Army.

A view of the "A Final Stand" marker and some of the battlefield behind it. 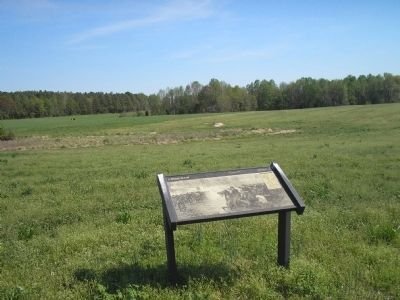 A tour stop on the Five Forks Battlefield Tour. 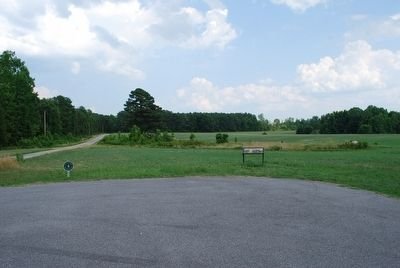 A picture of what is said to be the Confederate Armys right flank during the battle. 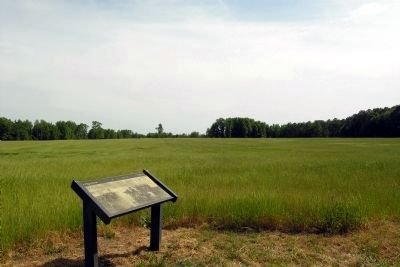 The Battle of Five Forks took place in Dinwiddie County Virginia on April 1, 1865. It was a battle between Confederate George E.Pcikett and Union Phillip H. Sheridan. This battle received the name Five Forks because of its location. Robert E. Lee ordered Confederate Maj.Gen. George E.Pickett to hold the crossroads of Five Forks.  The Five Forks referred to the intersection of White Oak Road, Scott's Road, Ford's Road and the Dinwiddie Court House Road. The Battle of Five Forks has also been referred to as The Waterloo of the Confederacy. Pickett had his troops to build a log and dirt defensive line that was about 1.75 miles long along the White Oak Road trying to guard themselves against Sheridan. Sheridan led the charge that ultimately ended the battle. This charge breached the left flank of Pickett's line. The Confederates tried to organize a new defensive line as a final stand but, Sheridan's cavalry moved around the right flank trying to prevent the Confederates from escaping. Nearly a third of Picket's 9,200 men were casualties leading the Union to a victory.

This battle was Union versus Confederate. For the Union side, the Commander was Philip Sheridan. For the Confederate side, the Commander was George Pickett. Philip Sheridan had just made it back clearing out Confederates in the Shenandoah Valley. Sheridan also brought with him two divisions of Calvary to the Five Forks Battle. Sheridan had a fast pace style of warfare. Pickett brought three of his brigades of his old division to Five Forks. Pickett and the Confederates had only half as many men as the Union and Sheridan though. The Confederates were also on the brink of starvation and had little stamina for such a battle after spending months in the trenches of Richmond. The Union men used infantry to attack the Confederate line rolling up the flank from East to West.