Facing an invasion of the recently-formed Republic of Texas in 1842, local leaders gathered two hundred and twenty volunteers to fight under the leadership of Captain Jack Hays. The Mexican army, led by General Adrian Woll, had captured San Antonio with a force of 1,600 men. Hays devised a plan that lured Woll to a place where his men could fire from protected positions. Although outnumbered, the superior position and mistakes by Woll led to the Mexican army retreating from San Antonio with significantly more casualties.

The Battle of the Salado Marker located in San Antonio, Texas. 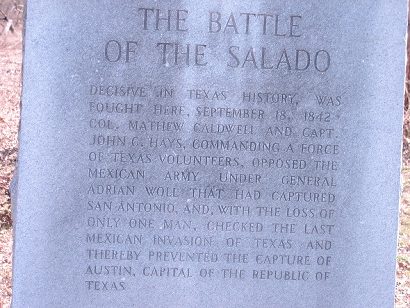 The leader of the outnumbered Texans, Jack Hayes. 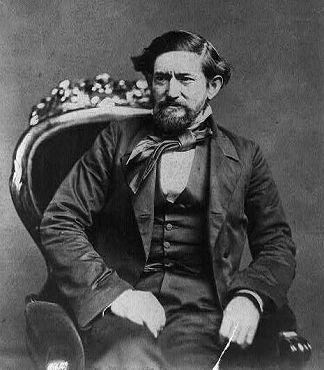 General Adrian Woll, the leader of the Mexican Army that attacked Texas in 1842. 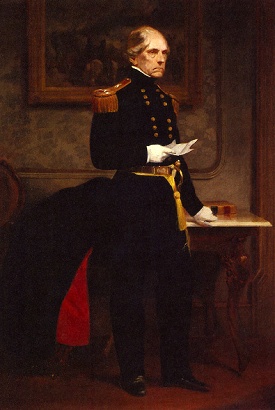 In 1842, leaders within Mexico planned an attack they hoped would result in the destruction of the Republic of Texas and reacquisition of the land lost to the Texians in 1836. San Antonio and several other cities had been captured at various points in that year, and there were times when it looked like Mexico might send a substantial army to follow up on these raids. During the fall of 1842, General Adrian Woll led a small Mexican Army of about a fifteen hundred men augmented by Native American scouts. Woll led his men across the Rio Grande with the goal of demonstrating the viability of reconquering Texas.

The attack on San Antonio was a surprise, and Woll easily controlled the small but growing community. A group of neighboring Texans of Mexican and American descent volunteered to take the fight to Woll. The volunteers were led by Captain Mathew Caldwell and John C. Hays to Salado Creek, about 7 miles from the center of San Antonio at that time. The Texans were hoping to lure the Mexican leader, Woll, into an open prairie where they could fire from a superior position so they could inflict damage on the larger army while still having a route of escape. The goal was to reduce the Mexican army in hopes of rallying the local population and dissuading Mexico's leaders from believing that Texas could be taken without a prolonged and deadly war that would lead to more internal dissent within Mexico.

John C. Hays, Henry McCulloch, William Wallace, Robert Gillespie, along with thirty-four other men pushed closer into San Antonio. They originally stayed about a mile away. When they didn’t get a response from that distance, Hays and McCulloch took six men and arrived pushed forward to a position that was about half of a mile away from the Mexican force. They were hoping to draw around forty or fifty Mexican troops, out- a number they could defeat before retreating. Instead, four hundred to five hundred men came charging towards the eight of them. The Texans were chased back to their original position at Salado Creek.

The Texans were not initially prepared to fight the Mexican troops when Hays got back to the campground, but they quickly prepared to battle. The plan had worked to bring Woll and his troops into an open prairie, but they did not anticipate the large number Woll might risk against an unknown force. The superior position gave the Texans a chance to fight with minimal risk unless Woll ordered a full offensive. Instead, he held his men back and the Texans were able to inflict some damage with their superior rifles. After these skirmishes, about sixty Mexican soldiers had been killed or wounded to only one Texan casualty. The Mexicans fled the next day.

The Texans followed the Mexicans once they realized they were leaving the area. The Mexican Army did not realize that the Texans were near, and the Texans surprisingly attacked them again causing more damage. The Texans had to retreat after an initial attack, but this continued to weaken the Mexican position in hostile territory.

After several days, Captain Hays was given permission by Caldwell to attack the Mexican Army once again. The Texans killed all five of Woll's artillerymen during their attack. General Woll responded by moving his troops away from the river during the night and they soon retreated across the Rio Grande.