Located in Magic Kingdom in the Walt Disney World Resort in Orlando, Florida, the Carousel of Progress is a classic attraction which tells the story of an American family through history. The story follows John, his wife, and children through four eras of American history, informing the audience about the technological developments of the time. The 20 minute attraction serves as a celebration of progress and technology throughout the ages.

John and Rover in the kitchen during the 1920s. 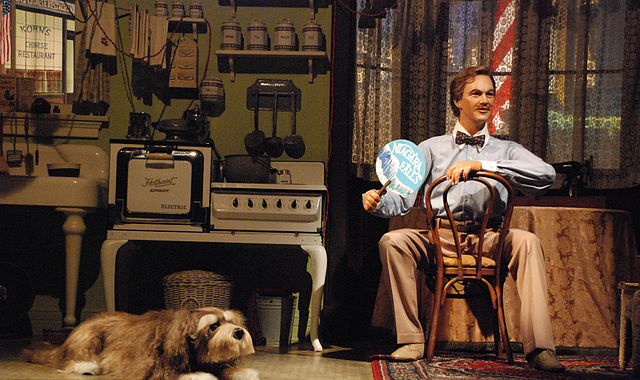 The outside of the attraction. 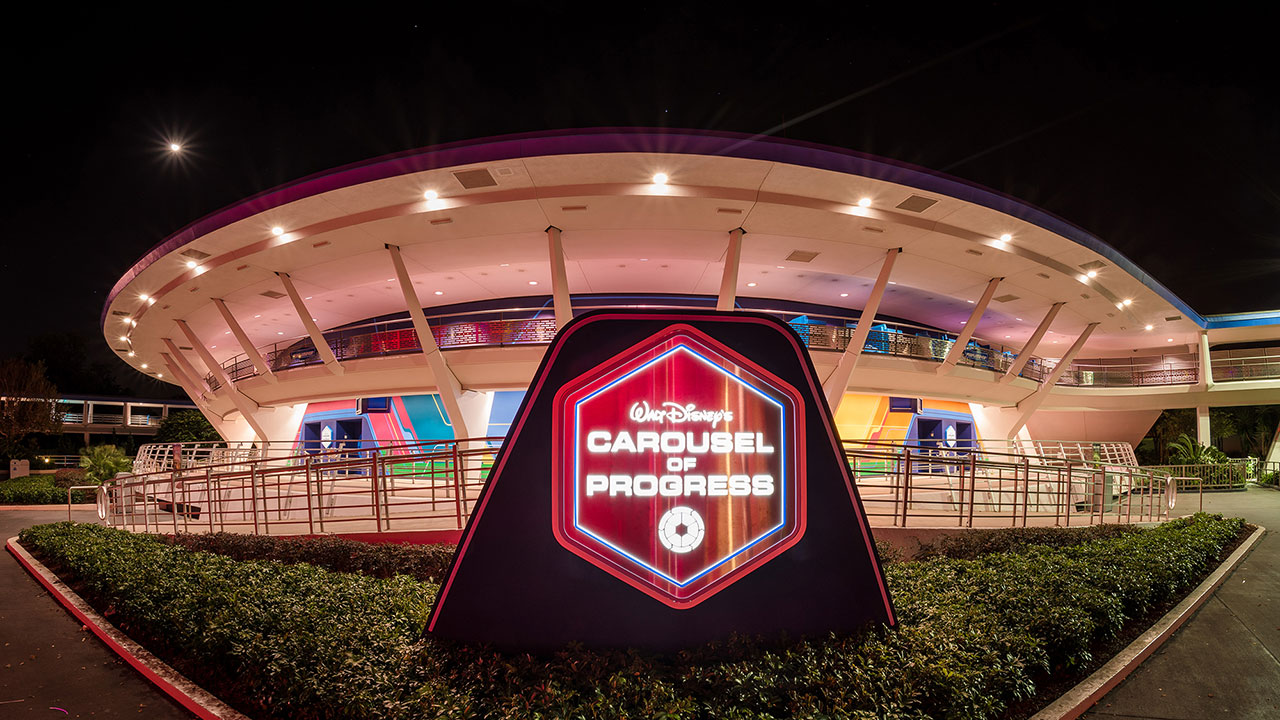 John and Rover during the turn of the century. 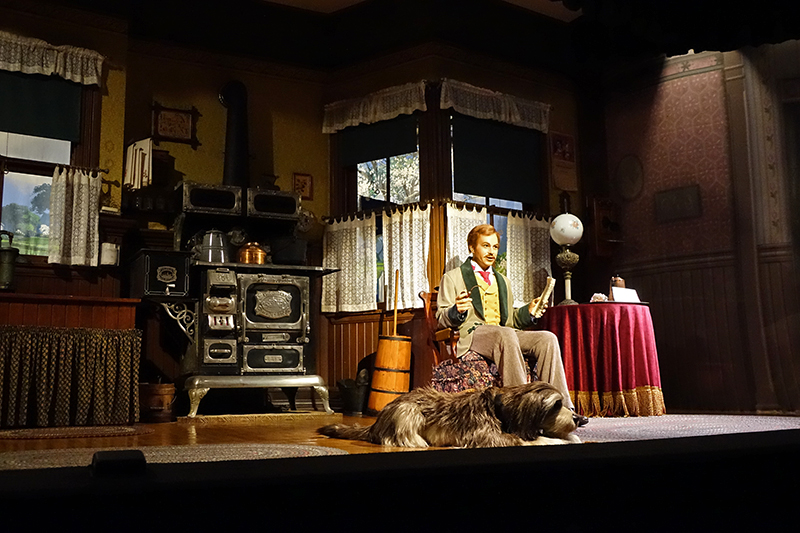 The family during Christmas.

The Carousel of Progress is an indoor attraction located in Magic Kingdom in the Walt Disney World Resort. Walt’s original goal for the project was to add it as a preview to a new section of Disneyland called Edison Square. That was eventually abandoned, but the project morphed into “Progressland” which then debuted at the 1964 World’s Fair in New York, sponsored by General Electric. Since then, it has lived on as the Carousel of Progress in Disneyland from 1967 to 1973 before it moved to Magic Kingdom in 1975. Today it can be found in Tomorrowland, a little ways away from Buzz Lightyear’s Space Ranger Spin and Space Mountain.

The twenty minute attraction is a rotating indoor theater that showcases an animatronic version of the classic American family through the lens of observing the technological advancements of four eras in history: the turn of the century, the 1920s, the 1940s, and the future. Each scene also represents a popular American holiday, using that time of year as a framework for the events. In the first scene it’s Valentine’s Day, then the Fourth of July, then Halloween, and finally Christmas. The main characters of this story of progress are John (the central narrator), his wife Sarah, their daughter Patricia or Patty, their son Jimmy, and their dog Rover. Other members of this family show up in a few scenes, such as Uncle Orville- usually complaining about the lack of privacy in their home, along with Grandma and Grandpa. The stage has a few parts to it: the main kitchen set up where John narrates from and circular areas, one on each side, that provide a way for other family members to enter and exit the scene from various parts of the house. They’re covered with a thin, semi-transparent curtain that allows the animatronics from within the room to be illuminated when the lights shine on them, but without lights, blend in with the pattern of the walls in the kitchen. They provide a lens into different rooms to show how they’re decorated and with what technology to help immerse the audience in that era.

The ride opens with a brief history of the attraction before the theater rotates around the stage to reveal the first scene. The song, “There’s a Great Big Beautiful Tomorrow” written by the Sherman Brothers, plays as a transition piece between each segment, both starting and ending each scene. John is seated in his kitchen with a pipe and newspaper, addressing the audience that it is “right around the turn of the century.” He says that buildings are now towering as high as twenty stories and there are moving pictures on big screens. John helps to fully set the scene of the advancements of the country by also adding that there are roughly 8,000 automobiles nationwide. The Wright Brothers are briefly mentioned as “two brothers from North Carolina who are working on some sort of flying contraption, it’ll never work,” he says with a chuckle. John then goes through the technology they now have available to them inside the home such as gas lamps, a telephone, a cast iron stove, and a new icebox. The appliances come to life, opening and closing on queue to show the audience their service to the home. John thanks progress that they no longer have to carry water from a well and they now have a pump right in the comfort of their own home. John also talks to Sarah in this scene, telling her about “some fella named Tom Edison” that is working on an invention called snap-on electric lights, to which Sarah is elated that she no longer will have to worry about kerosene or gas. Sarah chimes in with her appreciation of progress due to an invention that cuts down the time of laundry day to five hours, as opposed to two days. Other inventions that are featured in this scene are a stereoscope, a “talking machine” or gramophone, and root beer being re-branded from sarsaparilla. An ongoing story-line along with John’s excited observations of progress is that it’s Valentine’s Day and his teenage daughter is attending a dance, while John is taking Sarah out for a night on the town.

The scene transitions to roughly 20 years later in 1927, during the boom of consumerism in the wake of the end of WWI. It shows John seated once again in his kitchen, but with a slew of new appliances and electronics. John mentions Charles Lindbergh’s famous flight across the Atlantic that is about to take place and Babe Ruth’s success as a baseball player. The main focus in this scene is the large amount of electric appliances in their kitchen. John thanks Thomas Edison for their success and magically all of the appliances start moving on their own, showing the audience all of the cool new inventions. Through this, he ends up blowing a fuse in not only his house, but the entire block. His son helps him out and changes the fuse, restoring the electricity just in time for Sarah to enter the conversation, informing him about the costume she’s been sewing for the Fourth of July parade they’re attending. She complains about the heat, thanking John for the installation of a light on their front porch as she finishes their George and Martha Washington outfits. Jimmy pipes up and proudly shares some tunes he picked out for the parade using their radio, which was a staple of the era for finding out news from around the country. John informs the audience about how they have indoor plumbing now and the left side of the stage reveals Uncle Orville in their large bathtub with “air cooling” that he rigged up to cool down.

The stage moves once more, spinning to reveal John in an updated kitchen decorated for Halloween. They’re in the “fabulous 40s” and there have been major technological improvements over the years. He shows the audience their more modern refrigerator and their new automatic dishwasher which saves him time after dinner to now spend with Rover. John mentions that people are now involved in the “rat race” and he has to commute to and from work now. In the living room, Grandma pipes up complimenting progress as she watches television. The screen she’s watching shifts from a “fluff” dancing show to a boxing match and she becomes engrossed, talking to the boxer to give “him a left you, big lug.” John says that a “new age of electronic civilization” is upon them, foreshadowing the large technological advancements that will be made during the Cold War and beyond. Jimmy enters the scene dressed up as the Wolf Man, carving a scary jack-o-lantern modeled "after his sister," who doesn’t hear his small dig because she’s on the phone while using a workout machine. Following the trends of the time period, Sarah is wallpapering their basement to turn it into a “rumpus room,” using one of John’s clever inventions to stir her paint by using her food mixer. It begins to spin too quickly and spills paint across Sarah’s clothes and John invites the audience to cheer her up by joining him in singing “There’s a Great Big Beautiful Tomorrow.”

The stage shifts and rotates to reveal a more open stage layout without any of the side panels. Everyone in the family is dressed in somewhat 1980s or early 90s fashion, but there is no specific date or time period revealed for the setting. The scene is decorated for Christmas with a tree in the left corner where Grandpa and Patty are sitting, a TV set in the center close to where Jimmy and Grandma are, a dining set in the back, and a large kitchen where John is standing at the counter with Sarah in a desk chair in front of a laptop. Of course Rover is there too, dressed for the occasion in a red bow. Jimmy is wearing VR goggles with a sensor glove and is playing a space cadet first person shooter video game before he lets Grandma have a go at it. Sarah tells the room that she finished programming a voice activation system for the house, showcasing the technological progress. John can now command his oven to increase its temperature to cook their turkey without having to push a button. Through the scene, Grandma is succeeding in her play through, Jimmy happily announcing her increasing score to the room and John repeats it in awe. The oven picks up on his voice and gradually keeps increasing the temperature from 375, 550, and then 975 which overloads the system. The door flies open, revealing a burnt turkey for their Christmas dinner. The family marvels over the progress they’ve seen over the years, wondering what will be invented next in the upcoming century. The scene ends with a reprise of their theme song which plays as the stage rotates for the final time before the audience can exit and enjoy the rest of their day in Magic Kingdom.