Built around 1887, the Hoene-Werle House is a significant example of nineteenth-century housing in the Pittsburgh Northside area. The Hoene-Werle House is a "U" shaped three-story duplex with a central courtyard in the rear. The house and its adjacent buildings were owned by two German immigrants, Herne H. Hoene and Fred H. Werle. The house was eventually abandoned for a significant period of time until the City of Allegheny acquired the property in the 1970s and was restored in 1982. In 1984, the Hoene-Werle House was listed in the National Register of Historic Places. The building is also part of the Manchester Historic District in Harrisburg, PA, which is known for its finest examples of nineteenth and twentieth architecture. 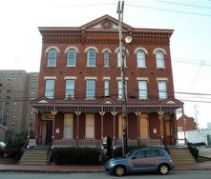 Historical deeds conclude that the Hoene-Werle House was built around 1886. The building and its neighboring houses were owned by two German immigrants, Herne H. Hoene and Fred H. Werle. Hoene was a partner for a large retail piano and organ business in downtown Pittsburgh. The other owner, Werle, was a druggist at a store in the downtown Pittsburgh area. Along with his activities at the store and the property, Werle also helped German immigrants in the area to gain American citizenship by sponsoring them.

The three-story duplex is not a common structure with two buildings merging together by a party wall. Instead, the house is in a "U" shape that encloses a courtyard in the back of the property, and in order to get to the courtyard, people would have to go through the breezeway in front of the building. The courtyard's design evokes a quiet, controlled space since the building encloses the courtyard off from other houses and residences. The bays and many windows on the courtyard provide light and air throughout the house.

The property's most interesting features are the massive molded brickwork and millwork cornice molding. The cornice molding serves as a foundation for the large low-hanging roof supported by wooden brackets. The pediment features a large wheel with spokes, and a leafy pattern encloses the wheel. Below the roof, three smaller pediments were built on top of the porch. The brickwork implemented into the house has two distinct designs: a sunburst pattern and a basketweave pattern.

Even though the porch was constructed of robust millwork, the porch collapsed. The house was abandoned until the 1970s when Allegheny County acquired the property, and the porch was rebuilt by the Allegheny Millwork, Inc, a local restoration company. The company also salvaged one of the porch's pediments that had collapsed with the porch. The shadow lines of where the pediment used to be still remain visible.

In 1982, the entire house was completely restored. In 1984, the Hoene-Werle House was listed on the National Register of Historic Places. The establishment is also part of the Manchester Historic District, a famous neighborhood in Harrisburg, PA known for its nineteenth and twentieth century architecture and historical buildings and establishments. The Hoele-Werle House is not only a surviving artifact of nineteenth-century architecture, but it is also a distinguishable structure with its courtyard, breezeway, and full-width porch, separating itself from other houses and establishments in the Manchester Historic District.