Two members of the last graduating class of the Central Consolidated School reflect on their own experiences at this school. 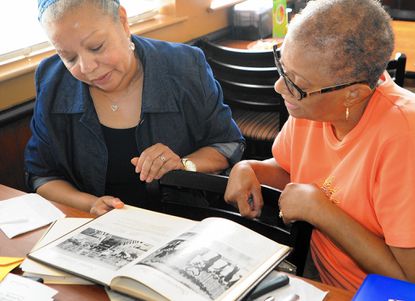 This is a photo of Central Consolidated faculty members. 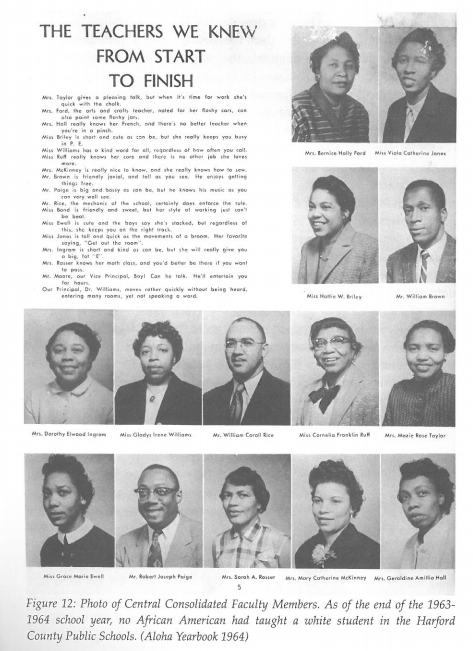 This is William "Bill" Brown was an educator and coach at Central his sports teams were very successful and he advocated for integrated athletic competition. 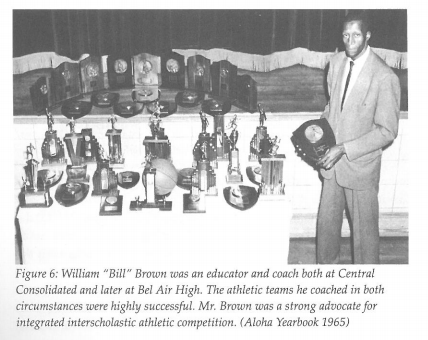 This is a photo of Central Consolidated High School in 1963.

This is Dr. Percy V. Williams the principal of Central from 1951 until 1962 who also served as a supervisor in the school system and a member of the board of education. 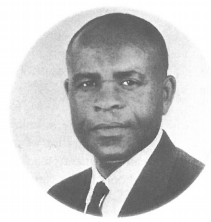 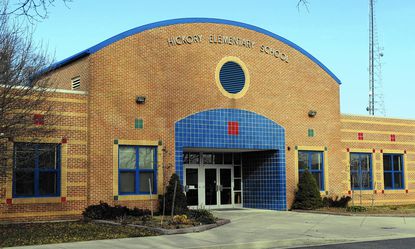 Up until 1954 all schools were segregated. There were schools for the white children and there were different schools for the colored children. Schools were not the only thing segregated during this time period. The Jim Crow laws passed in 1877 legalized racial segregation across the United States for just about anything. Other places that were segregated during this time were bathrooms, water fountains, public pools, and many other facilities. The separate but equal doctrine created in 1896 confirmed that racial segregation did not necessarily violate the Fourteenth Amendment of the United States Constitution, which gives "equal protection" under the law to all people. The separate but equal doctrine claimed that although facilities were separated they were still equal. However, the facilities that were divided were far from equal.

The schools in Harford county were very spaced apart and very limited in access. The county in general is displaced from the city, so readily available city trams and taxis were out of the question. It wasn't uncommon for students to car pool as means to reach the consolidated high school, which was previously an elementary school. If carpooling wasn't an option, then the bus would have to be the next course of action, which in itself posed a challenge as at the time students could only access colored allowed buses.

Central Consolidated lacked many things that other white schools had. The plumbing was poor and students had to walk outside to use the toilets. It didn’t have heat in the winter and they did not offer business courses, advanced sciences, music classes, or gym. All of the books and the materials used in the class room were "hand me downs" and old.

Although students who attended Central Consolidated went to a segregated school they made the most of what they had. Despite the unfair education experience students of this high school had many of people who graduated from this school became very successful and had pleasant experiences in school. Christine Tolbert was a graduate of Central Consolidated class of 1952. Tolbert said teachers "worked had to make sure that [students'] self-esteem was intact, and they were proud of what they had and what they were doing and they were motivated to move forward." (Anderson). Tolbert and other students commented on how there were many good teachers who worked at the school to help students overcome obstacles they had to face. Tolbert said as students they had to overcome many obstacles but that made them even more hardworking individuals. After Tolbert graduated she became a teacher at Havre de Grace Consolidated high school. In which she advocated for the rights of her students and realized that this was not fair, she believed black students deserved the same educational opportunities that white students got.

In 1954 the supreme court case brown vs. the board of education occurred.The Brown vs. Board of education was a turning point of segregation within schools. This court case helped bring an end of segregation within schools by putting down the “separate but equal” doctrine. However, the Harford school officials spent another ten years resisting the desegregation of their schools. On August 7th, 1963 a petition was formed by a group of colored citizens saying Harford County schools must be desegregated. The superintendent at the time, Willis, claimed that desegregation was not possible because of physical facilities. During the summer of 1963 a group of black and white educators from the Harford County school district were put together to make up what was called "The Committee to Study Problems of Desegregation" in order to formulate proposals to completely desegregate the entire public school system. The commissioners plan called for complete elimination of any segregated eduction in Harford County at the start of the 1964-1965 school year. Quickly after this occurred the name changed from Central Consolidated High School to Hickory Elementary School.