The Packard Proving Grounds was a vehicle testing site for the Packard Motor Company in Shelby Charter Township, near Detroit, Michigan. The Packard Company used this site from 1928 to 1956 to test their automobiles and perform other experiments. The site today is open to the public for tours and can be rented for events.

The entryway to the grounds

Aerial photo of the Proving Grounds 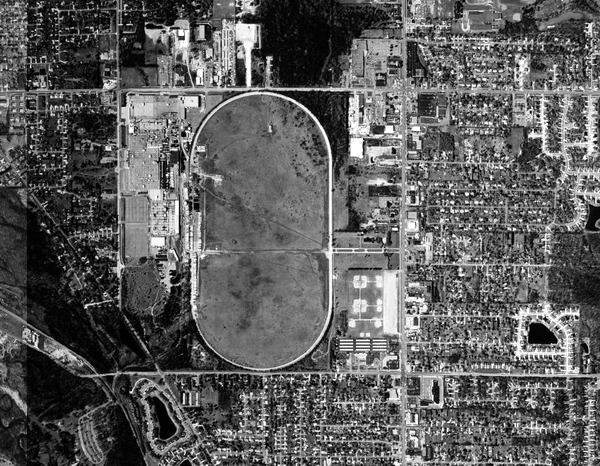 Packard started production of automobiles in 1899. The idea for a car company began when the Packard brothers purchased a Winton automobile. It frequently broke down and proved to be an unsatisfactory vehicle. The brothers decided to make their own car instead; they developed a few prototypes, and caught the attention of investors. In 1906 they purchased a factory in Detroit to begin mass-producing vehicles. They quickly became one of the top selling luxury vehicle brands. They produced trucks and airplane motors for World War I, including fulfilling an order of 10,000 trucks. After the war, Packard continued building some of the top luxury cars in the world. They became known as the Hollywood star's car. Notable owners including Al Jolson, Clark Gable, and even the emperor of Japan.

As Packard's reputation grew, the need for testing of the vehicles, and performing various experiments regarding automobiles and accessories grew. In 1926 construction of the Packard Proving Grounds began, and was finished in 1928. The site consisted of numerous buildings: a garage with laboratory equipment, a hangar for the testing of aircraft motors that Packard designed, a high speed oval track, a repair garage, and a lodge for the manager of the Grounds. During the Second World War, the site was loaned to Chrysler to test tanks and other armored vehicles. With the end of the war, Packard reclaimed the site and continued to use it until 1956, when the merger with Studebaker caused them severe financial burden. They leased the property to Curtiss-Wright, which maintained ownership of the Grounds after the lease ended in 1959. It was then sold to Ford in 1961, which used the facilities for production and emissions testing. in 1998, Ford planned to open the property for development. Demolition permits were requested, but denied, and a contract for a USPS distribution center was obtained. Local historians and Packard enthusiasts banded together to stop the destruction; fighting for it to be added to the Michigan Historic Sites Registry along with the National Register of Historic Places. A nonprofit was formed called the Packard Motor Car Foundation, which helped to get the Grounds on these two registries. Ford donated seven acres to them with multiple buildings, on the condition that the buildings would be restored. Seven more acres were eventually donated upon meeting goals set by Ford. The Grounds are still in use today, and are available to tour every weekday. The venue is available to rent for weddings, car shows, and other celebrations.

The following is an interview with the staff regarding the Proving Ground:

How long has the Packard Proving Grounds been on the National Register of Historic Places?

Since 2007. The site is also Listed on the Michigan State Register of Historic Places.

Are there any plans to expand the current site?

Not at the present time. We may in the future purchase some adjoining properties that were once part of the Packard Proving Grounds, if they come up for sale, if we determine there is a need to expand, and if there are funds to purchase them.

Do the grounds own any Packard automobiles, and if so; how many?

Any rare prototypes or concept cars? Yes, we own a number of Packard automobiles. We also have a few cars on loan from the Detroit Historical Society that are also on display. One of these cars is a rare prototype Packard; it was Packard designer Edward Macauley’s 1951 Pan American. Here is some more information on this car: https://www.hemmings.com/blog/2018/07/08/pan-american-the-mysterious-packard-concept-sports-car-which-way-did-they-go/

What are some of the top attractions at the site?

We have a number of buildings that were designed by the famous architect, Albert Kahn. Once such building, the Gate Lodge, is being restored into a house museum. Another Kahn building, the Repair Garage, is our event center which can be rented for a variety of events. There is also the Tank Building, which was designed by William Kapp and built by Chrysler Defense during WWII when the Proving Grounds was used for tank testing. This building currently houses our automobile collection, our Packard engine collection, and the Miss America X, a large racing boat built by Gar Wood, which is on loan to us. There are a few other buildings including a Timing Stand alongside the remains of the Test Track and an airplane hangar which was built around 1927 and was used for airplane engine testing by Packard. Famed aviator Charles Lindbergh visited the site and this hangar in 1929 to check out the Packard airplane engines. We have many events on site throughout the year such as our annual Open House in the fall, the Cars ‘R’ Stars car show in June, and a May-October Farmer’s Market. There is a calendar of events on the Packard Proving Grounds website.

Is the test track itself still usable, if so, is it still used?

The Test Track was torn up in 2003. The property where the track was located belonged to Ford Land Development Corporation and was sold to build houses and condos. The Packard Motor Car Foundation, which currently owns today’s Packard Proving Grounds, was able to retain a few hundred feet of the track alongside the Timing Stand.

If you had to explain the Grounds and the Packard company to someone who has never heard of it, how would you explain its significance and impact on history and the automotive industry?

Special thanks to the Packard Proving Grounds, Mary Anne Demo, and Hilary Davis for their support and helpfulness regarding research of the Grounds.