During the Civil War in the United States of America, there were many important people that collaborated along with the president Abraham Lincoln, to carry out his plan to reunite the country. Such is the case of Thomas Alexander Scott, whose knowledge helped the president to move troops thanks to the well-known Pennsylvania Railroads. He was an important element during this period. Thomas' childhood was not that easy so he had to learn how to work hard and thanks to the experience he got he would later on became one of the most respected railroad men of his generation. During his career and thanks to the different positions he had, he was a trust worth man of the Union side capable to manage the operation of 13,000 men, their supplies and their horses from Nashville to Chattanooga, Tennessee. 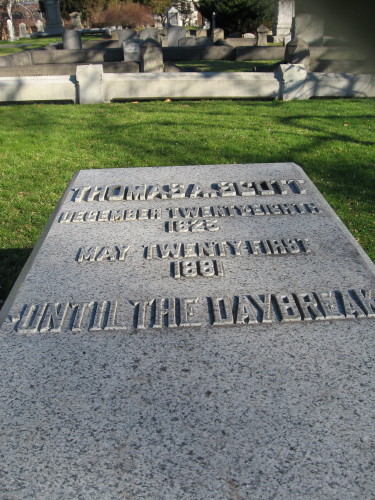 Thomas Alexander Scott was born in December 28th in 1823 in Fort Loudon, Pennsylvania. He was born within a big family, he was the seventh child. He was not that wealthy during his childhood and part of his youth, he even lost his father at the age of ten, his father used to operate a tavern in Franklin County. During his childhood he started to work a farm and later on in a store as a clerk. He also moved from one place to another with his family in order to keep working. He went to school during winter in country schools. It can be said that his education was to a certain point bounded but it did not limit him because he was autonomous enough to find the way to cultivate himself with books.

From 1840 to 1847, he worked as a clerk with one of his relatives in a state office in Columbia, Pennsylvania. His job was to collect the tolls in canals and roads. Through these years he got more experience in the business field and after this time he became the chief clerk of the Philadelphia toll collector. Later on in 1850 he got a new job as a station agent for the Pennsylvania road in Duncansville and he was promoted and in 1853 he was designated the general agent at the Pennsylvania Railroad's Pittsburgh office. All these years of training and being in such important positions gave him the knowledge and experience of how it was to run a business.

That is how in 1859 he became the first vice president of the Pennsylvania Railroads. Then in 1860 when the Civil War started to erupt he played an important role in it. In 1861 when the Civil War started and the Union was under the government of Abraham Lincoln he became the Assistant Secretary of War. During this time he was in charge of moving the supplies and troops for the war effort on the side of the Union, he began the new railway line that connected Washington to Philadelphia in order to move men and supplies between Harrisburg and Annapolis. He also coordinated the management of rivers in the northwest and west for the army. Furthermore, he recommended the president to try to avoid attempts of assassination by advising him to change his routes to get to Washington by doing it in the rail. For two years he administered the supervision of all government railways and transportation lines, and he also supervised the railways and telegraphs relevant to the Union.

Besides he was an officer in the Union army and was a member of the staff of the governor Andrew G. Curtin. Thomas Alexander Scott prepared others to learn how to use railways during the war. One of the most important things he accomplished was to be the assistant quartermaster general for the General Hooker’s staff. His main goal was to maintain the Union Army with all the supplies possible.

Lastly, when the Civil War was over, he came back to the Pennsylvania Railroad and in 1870 he was declared president of such company. After the War was ended the following years were very productive for this business man who kept growing in the railroad field. Finally Scott died in 1881 in Pennsylvania at the age of 58. His grave can be found in Woodlands Cemetery in the Delaware County Pennsylvania.