Mound Bottom is a prehistoric archaeological site located in a horseshoe bend of the Harpeth River in Cheatham County, Tennessee. The site is a complex of several prehistoric structures: a central mound with an area 75 meters squared and height of 11 meters, thirteen other mounds arranged within a rectangular plaza, rows of houses, cemeteries, a three-sided embankment, and a gateway on the western edge. Mound Bottom was the civic and ceremonial center of a settlement of Mississippian people between 900 AD and 1300 AD. Agricultural improvements allowed for social differentiation and craft specialization in the population, which is estimated to have been 10,000 at its peak. It is theorized by archaeologists that this great concentration of people resulted in a strained environment with scarce resources, leading to the sites eventual abandonment. From 1823 to present day, Mound Bottom has been described, studied, or excavated on eight occasions, yet much remains unknown about the functions of the mounds, the social structure of the Mississippian people, and Mound Bottom’s relationship to other prehistoric sites throughout the Tennessee-Cumberland region and beyond. 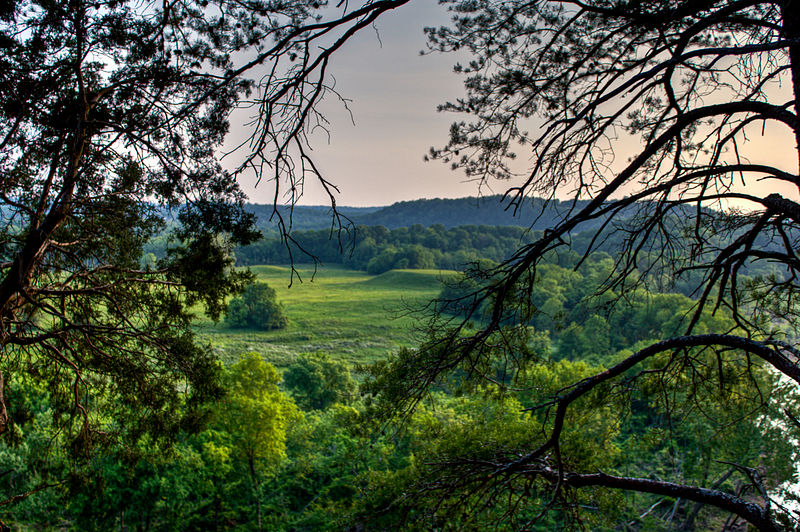 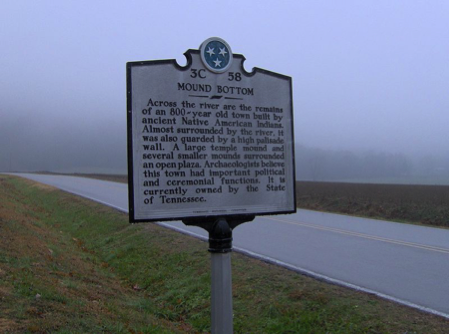 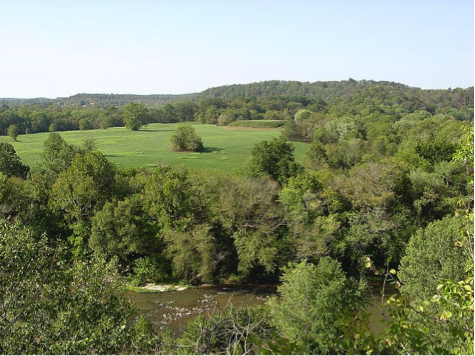 Archaeologists have established three centers where Mississippian culture developed and flourished: Cahokia of the American Bottoms area in Illinois, Spiro of the Caddoan area in Oklahoma and Texas, and Mound Bottom of the Tennessee-Cumberland area. The Mississippian People are descendants of the hunter-farmer-gatherers called the Woodland People. The development of corn agriculture in the late Woodland period increased stability in the region and furthered cultural evolution. The surplus of corn decreased the time necessary for the procurement of food and allowed for the social structure of the Chiefdom to develop. A priest-elite or chief of the settlement directed construction, regulated trade, and conducted warfare. The majority of the population were farmers who lived in wattle and daub houses of four meters in length. Houses were laid out in rows and each had a central fire basin. Staples of the Mississippian diet included corn, squash, gourds, sunflower, beans, berries, deer, turkey, and squirrel. A possible turkey pen attached to a house was identified in the 1974-75 excavations. The Mississippians attained a sophisticated level of crafting in pottery, shell engraving, copperwork, and stone carving.

Early archaeologists theorized that the Mound Builders were a mysterious race and unrelated to the Native Americans of colonial times. This race appeared in the area, built large complexes, and abruptly abandoned the sites due to constant warfare. This imagined story has been disproved and archaeologists acknowledge that it is more likely that local populations grew beyond the carrying capacity of the environment. Intense agriculture had exhausted the soil, resources were depleted, and a period of cold, the Little Ice Age, strained the civilization further. The declining population weakened the social structure and Mound Bottom was gradually abandoned for nearby areas. This process reflected a broader trend of dispersal across Mississippi, Ohio, and Tennessee, characterized as the “Vacant Quarter”.

One and a half miles away, a similar mound grouping called Pack Site is believed by archaeologists to be contemporaneous and part of a larger complex with Mound Bottom. Both sites contained similar pottery and artifacts, the construction of houses and the central plazas bear resemblance, both central mounds are oriented roughly 11 degrees east, and a connecting trail was observed in early studies. The two sites and surrounding areas together comprise the Mound Bottom Archaeological complex, also known as the “Great Mound Group”.

The earliest description of Mound Bottom was written by John Haywood in the Natural and Aboriginal History of Tennessee in 1823. In 1878, Edwin Curtiss led an investigation of Mound Bottom sponsored by the Peabody Museum of Harvard. Curtiss sketched the earliest known diagram of the site, identified eleven mounds, and excavated 40 stone-box graves. Around 1919, John Hill Taylor purchased a 200-acre farm including the Mound Bottom site. Taylor primarily grew corn and watermelon on the land and, fortunately for future archaeologists, never used pesticides or chemical fertilizer and rotated his crops regularly. William E. Myer, a special archaeologist for the Smithsonian Institution, completed the first archaeological study of the Great Mound Group in 1923. Myer conducted thorough excavations of Pack Site and arranged for aerial photography of both Pack and Mound Bottom sites. The Mound Bottom maps from this study included thirteen mounds and ten houses. A petroglyph depicting a mace, a symbol of authority in Mississippian culture, was found at this time by Albert F. Ganier, a local amateur archaeologist. In 1926, P.E. Cox, the state archaeologist, completed the next study. Cox was the first professional archaeologist that Taylor allowed to excavate the Mound Bottom site. The Tennessee State Library and Archives holds the signed contract detailing compensation, time restrictions, and material considerations for the excavation. A contour map was produced including fourteen mounds and four cemeteries. Cox found baked clay floors 2-3 feet below the surface of the mounds, which established that buildings likely existed on the summits. At the direction of Thomas M. N. Lewis, the University of Tennessee conducted excavations of the Great Mound Group in 1936-1937. Charles H. Nash, the field supervisor at Mound Bottom, led the excavation of 34 stone-box graves but several of them were empty from previous excavations. In 1940, Nash returned to excavate 70 additional graves. Lewis was interested in the purchase and development of Mound Bottom as a state park and in establishing a wayside museum for the site off U.S. 70. These plans faltered and John Hill Taylor allowed no further disturbances to his private property the rest of his life.

The Mound Bottom site was purchased by the State of Tennessee in 1973. Carl Kuttruff and Michael O’Brien of the Tennessee Division of Archaeology conducted the next archaeological study in 1974 and 1975. Fourteen mounds, a prepared clay floor, and a parallel double palisade were recorded, numerous artifacts recovered, and nineteen houses and six mounds were excavated. Radiocarbon dating was utilized for the first time on this site and established dates of occupation between 860 and 1350 AD within a margin of error of 100 years. Dates for two stages in the construction of the central Mound were also identified. Stage II returned a date of 976 AD and Stage III returned a date of 1144 AD. The significant findings of Kuttruff and O’Brien weren’t published until 2012. In 2016, Aaron Deter-Wolf, Sunny Fleming, and Sarah Levithol Eckhardt undertook new studies of the site. This work resulted in the first Digital Elevation Model map of the site and recorded fourteen extant mounds. In their published findings, Deter-Wolf, Fleming, and Eckhardt doubt the existence of the palisade, question how Mound Bottom fits contextually in the history of the Mississippian region, and encourage archaeologists to conduct more comprehensive studies of this important site. Since its purchase by the state, Mound Bottom has been managed by the Harpeth River State Park as an undeveloped archaeological preserve. The Harpeth River State Park offers tours of the site but in order to preserve the prospect of research, the land is not open to the public.