This tree in Fort Hunt Park commemorates the royal visit of King George VI and Queen Elizabeth in 1939; they were the first reigning British monarchs to visit the United States. The tree is the surviving specimen of two trees planted by Dr. Richard St. Barbe Baker on the honor of this royal occasion and also to celebrate the success of the Civilian Conservation Corps facility at Fort Hunt. The CCC was a nationwide Depression-era program that employed young people for landscape, park, and forestry work, and which planted over two billion trees across the country. The king and queen were particularly interested in this program, leading to the inclusion of the fort on the royal visit itinerary. 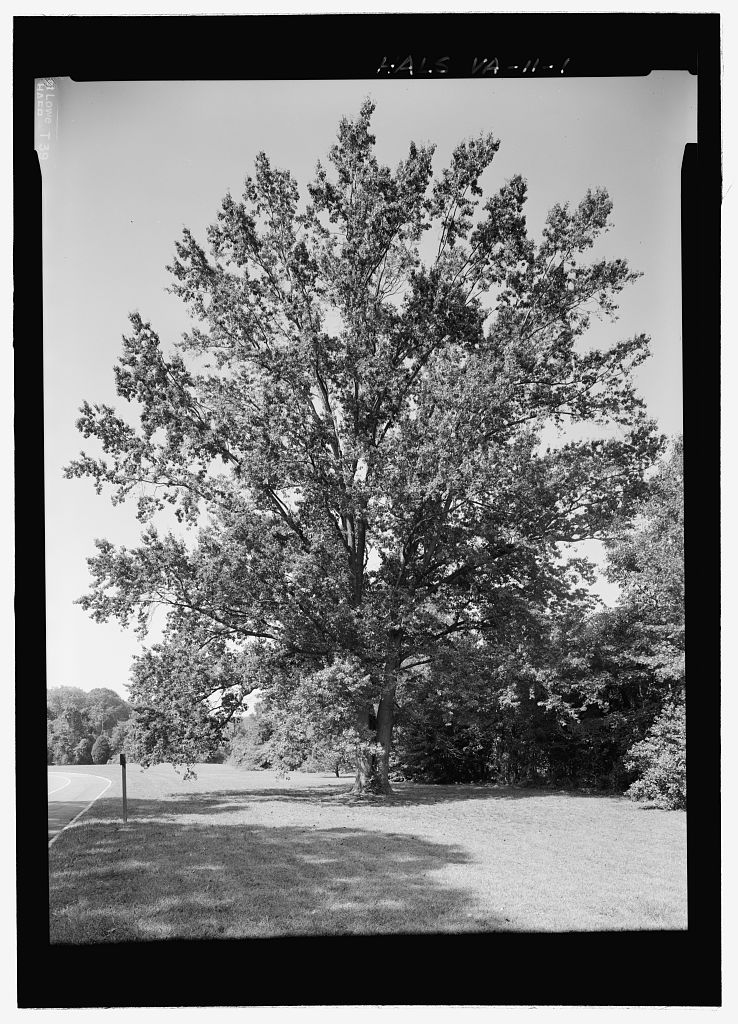 The pin oak (Quercus palustris) has a range across the contiguous United States, but is not native to North America. It was introduced sometime prior to 1770. Its Latin name means "swamp oak" as it often grows in wetland areas or damp terrain. It has become a very popular shade tree. Pin oaks are identifiable by their branching structure -- lower branches hanging, middle branches horizontal, and upper branches ascendant -- as well as their irregularly toothed and pointed leaves, with deep U-shaped separations (called sinuses) between the lobes.

Fort Hunt Park is situated on land once owned by George Washington, part of his River Farm estate. The federal government acquired the property in 1893 for coastal defense. Between 1933 and 1942, the fort served as a camp for the Civilian Conservation Corps, a program designed to combat unemployment during the Great Depression. The CCC pursued forest protection, trail and park construction, landscape naturalization, and similar projects, and planted over two billion trees across the United States.

Lauded as a model facility, Fort Hunt welcomed heads of state, including British King George VI and Queen Elizabeth in 1939 during their tour of the United States and Canada. At this uncertain time in world history, the royal visit sought to build support among western nations against the strengthening Nazi Germany, and the American president sought to demonstrate that support. President Franklin D. Roosevelt and First Lady Eleanor Roosevelt hosted the monarchs on their tour of the fort, first lunching on the presidential yacht, sailing to Mount Vernon, then driving to Fort Hunt. The king and queen had specifically asked to see Fort Hunt, as they were interested in unemployment programs. Either that day or soon after, renowned forester Dr. Richard St. Barbe Baker (1889-1982) planted two pin oak trees at Fort Hunt. One of them still survives.

During World War II, the fort housed some military operations, which led to the loss of some CCC-era structures and plantings, as well as changes to roads and pathways. There is no signage marking the Royal Visit Pin Oak, but the Historic American Landscapes Survey (HALS) documented the tree and it is also part of the National Parks Service Witness Tree Protection Program.