On July 25, 1862, approximately 200 Confederate raiders struck at two companies of the 9th West Virginia Infantry stationed in Summersville. Caught completely by surprise, the town was quickly overrun and much of the garrison captured. Central to the raid's success was young Nancy Hart, a Confederate sympathizer and spy who scouted Summersville and accompanied the Rebel raiders. In 2017, West Virginia placed a historical marker to denote the raid. 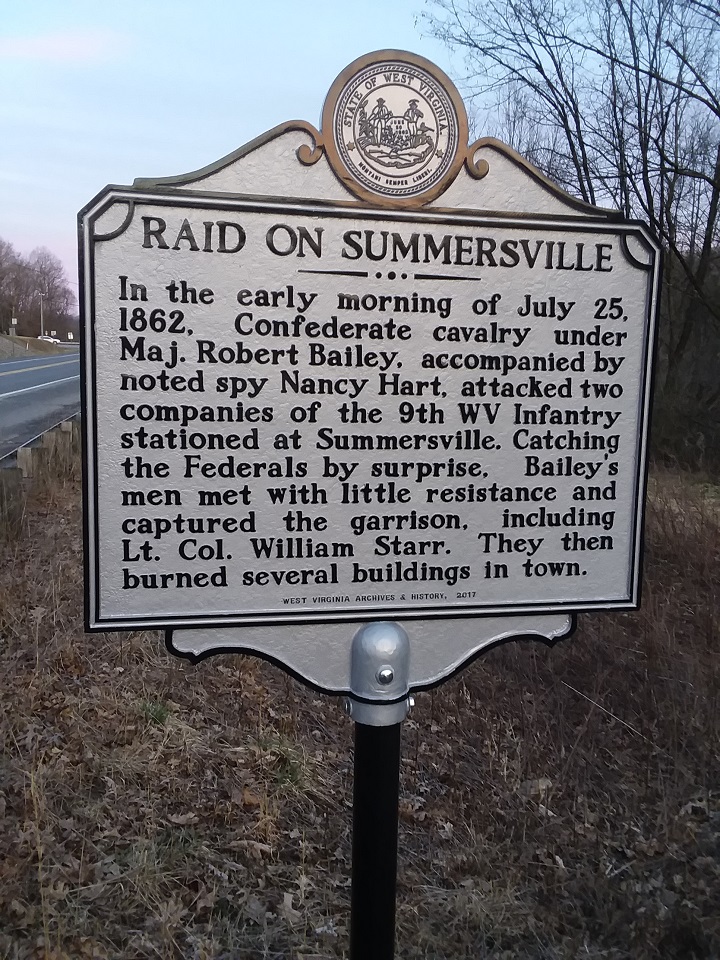 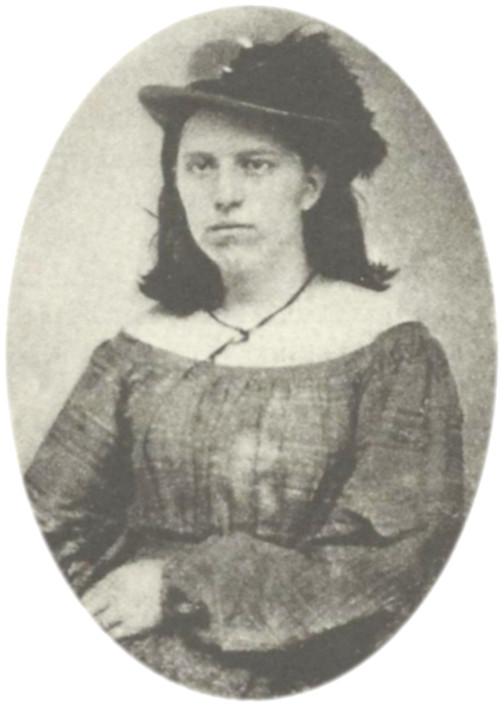 In July 1862, young teenager Nancy Hart of Roane County, Virginia was arrested by by Lieutenant Colonel Starr of the 9th West Virginia Infantry. It was believed Hart was spying on Federal positions for the Confederacy. This was not Hart's first brush with United States authorities; indeed, she had been arrested on a similar charge in Braxton County the year prior, although she managed to convince Union authorities she was innocent. Now again in captivity, Hart was forced to sit for a photograph (the only extant portrait of her). Once again, however, she proved a wily prisoner and managed to escape imprisonment after seizing a guard's musket, killing him, and fleeing. She apparently fled to Confederate forces and informed them of the forces around Summersville.

Around 4 a.m. on July 25, 1862, three blue-clad Union pickets guarding the road leading north out of Summersville saw a host of Confederate horsemen advance on their position. One intrepid Union picket attempted to halt the advance, firing his musket rifle and believing he knocked a Rebel down. The other two fled without firing a shot, and all three scampered into the woods to escape. The 200 grey-clad troopers under Major Robert Bailey, belonging to four cavalry companies from the Shenandoah Valley (which would later belong to the 14th Virginia Cavalry), rode towards the town. Accompanying the Rebels was Nancy Hart.

A quarter of a mile way in the town of Summersville, Lieutenant J.W. Miller of the 9th West Virginia awoke at the sound of the picket's shot. Looking out an upstairs window, Miller "saw the street full of rebel cavalry, dressed in grey uniforms, yelling at the top of their voices." The Union garrison at Summersville constituted only two companies, and the Confederates overran the town with their unexpected pre-dawn assault. Separated from his own company who were quartered at the Tavern House across the street, Miller fled downstairs, out a back window, and across a field to escape.

The Confederates encountered almost no resistance, with a only a handful of shots fired. The Rebel raiders captured nearly the entire two companies of Federal soldiers, including much needed Enfield rifles and ammunition. Three houses were burned, along with several wagons and supplies of corn. The Confederates left town they same way the arrived, with dozens of prisoners, horses, and mules in tow. Among the captured was the Summersville garrison commander, Lieutenant Colonel William Starr of the 9th. The prisoners were taken back across the Blue Ridge Mountains by the Confederate raiders. Confederate trooper Edwin E. Bouldin thought the whole affair, "one of the most daring and difficult marches and captures of the whole war." A number of Federals did manage to evade capture or escape the Confederate raiders and within a few days over 50 had reported for duty at nearby Gauley, West Virginia.

The raid on Summersville appears to have been Nancy Hart's last dalliances with subterfuge. After the war, she settled with her husband John Douglas in Greenbrier County and passed away in 1902.

In 2017, in an effort to commemorate the Civil War and West Virginia sesquicentennial, a marker was placed in Summersville to denote the history of the raid.