History of the Centennial Wheel

Navy Pier is one of the most visited places in Chicago for a number of reasons but the main reason is to ride the famous Ferris wheel that was created for the World's Fair in Chicago in 1893. Even though the original Centennial Wheel is no longer standing, the history of where the amazing Ferris wheel came from is still alive. The wheel was said to be "One of the fair’s most prolific physical legacies"(H.P, V.), because something like this wheel had never been done before, so the Wheel left a lasting effect on Chicago and the world still to this day. 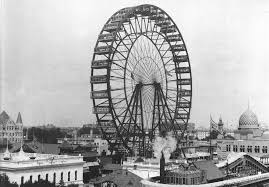 The Centennial wheel was created as a way to mark the Chicago World's Fair of 1893. The Wheel was created by George Washington Ferris Jr. and this man was an engineer who specialized in bridges and other steel design. Since Paris marked its World's Fair with the Eiffel Tower in 1889, Chicago wanted something just as amazing so Ferris came up with the idea of a Wheel. The goal of the Wheel was to make the Chicago World fair "the greatest exposition that had ever been held on earth" (Petroski). It's no question that the idea of the wheel brought great excitement in Chicago and around the world.

The Ferris wheel was proposed, and was picked to be the center for the Chicago's world fair. Since the wheel was expected to be "264-foot wheel with suspended carriages that could take 2,160 passengers at a time for a bird's-eye view of the fairgrounds"(Grossman), many thought that they task could not be achievable because it had never been done before, but Ferris rounded up some of the greatest engineers that he could find and ultimately got the task done. There was even a newspaper article that was published in Scientific America that told the public that the wheel would in fact been done on time. The article stated that "the great Ferris wheel is now rapidly approaching completion, and it is to be opened on the 22nd. It will be as great a success and it's way as was the Eiffel Tower in Paris"(Notes From The Worlds Columbian Exposition CHICAGO). The reason Chicago put wanted this article in the newspaper was to show that world they they did in fact make a Movable giant Wheel that passengers can go onto to get a birds eye view of Chicago in general, and they wanted to get the world even more excited for the World's Fair that was coming up that year.