Our Lady of Mount Carmel is a Roman Catholic church on Morris St. in New Brunswick, right off of George Street. It’s located directly behind the 7-Eleven and the Rockoff Hall apartments. This congregation became a reality in 1977, and it has “always been known as a National Hispanic Parish.” (www.olmtcarmelonline.com/english.html) The parishioners are currently some of the most important people to this site, who are mostly Hispanic, with the primary ethnicities being Mexicans, Puerto Ricans, Dominicans, and Ecuadorians. The significance of Parroquia Nuestra Señora del Carmen is the fact that it is a center of Hispanic culture that comes together at once a week for mass, and once every now and then for very big moments such as baptisms and weddings. This church is publicly accessible, but it’s definitely not the easiest of places to find. Mass is celebrated there 7 days a week, and completely in Spanish. (Rabinowitz)This site promotes community through its ministries and is visible in the group effort that is made by parishioners weekly in order to set up for and celebrate a Sunday mass. This church is run entirely by Hispanics, and its masses are celebrated solely in Spanish. 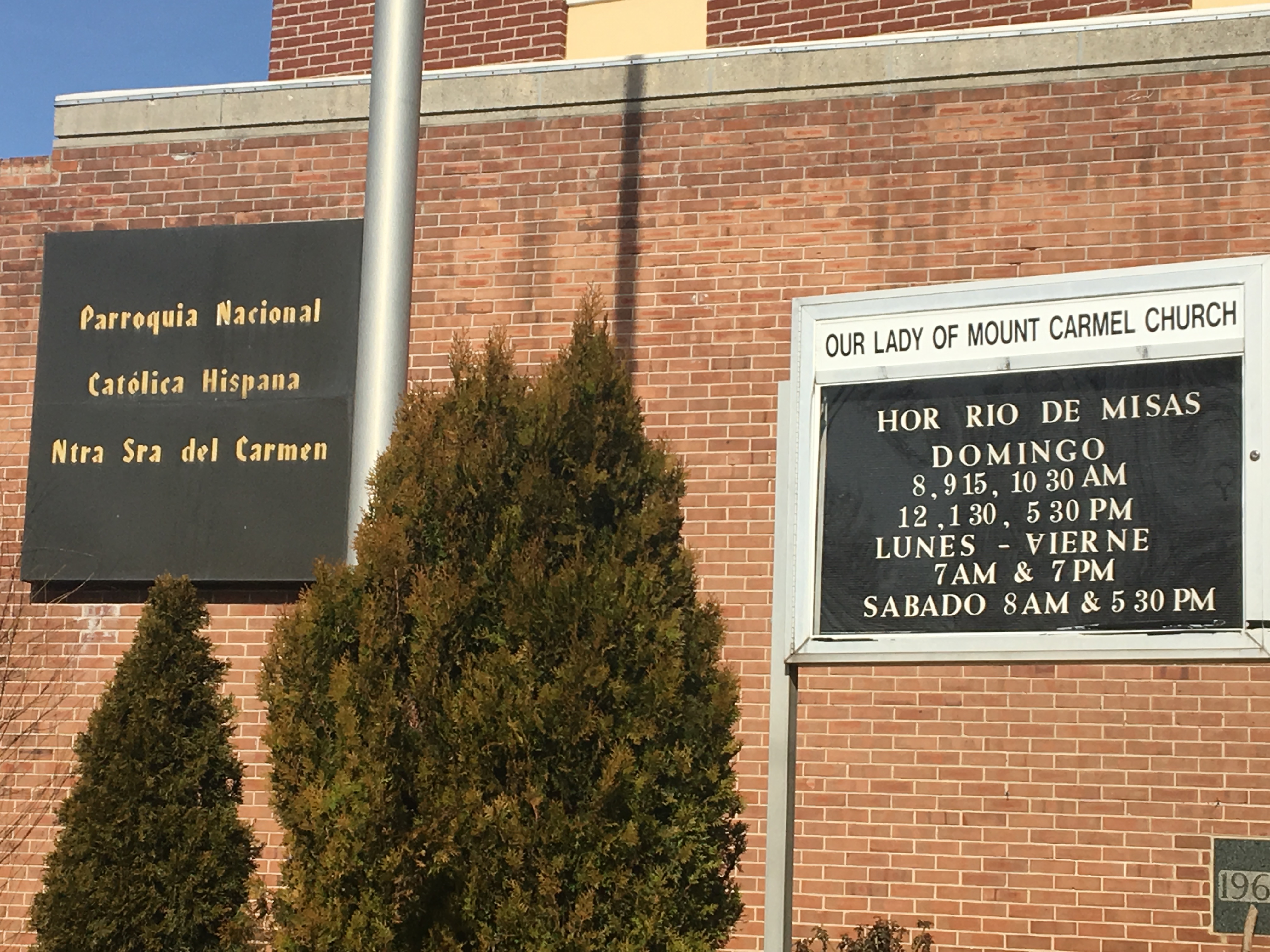 Decorated manger to the right of altar and Christmas tree 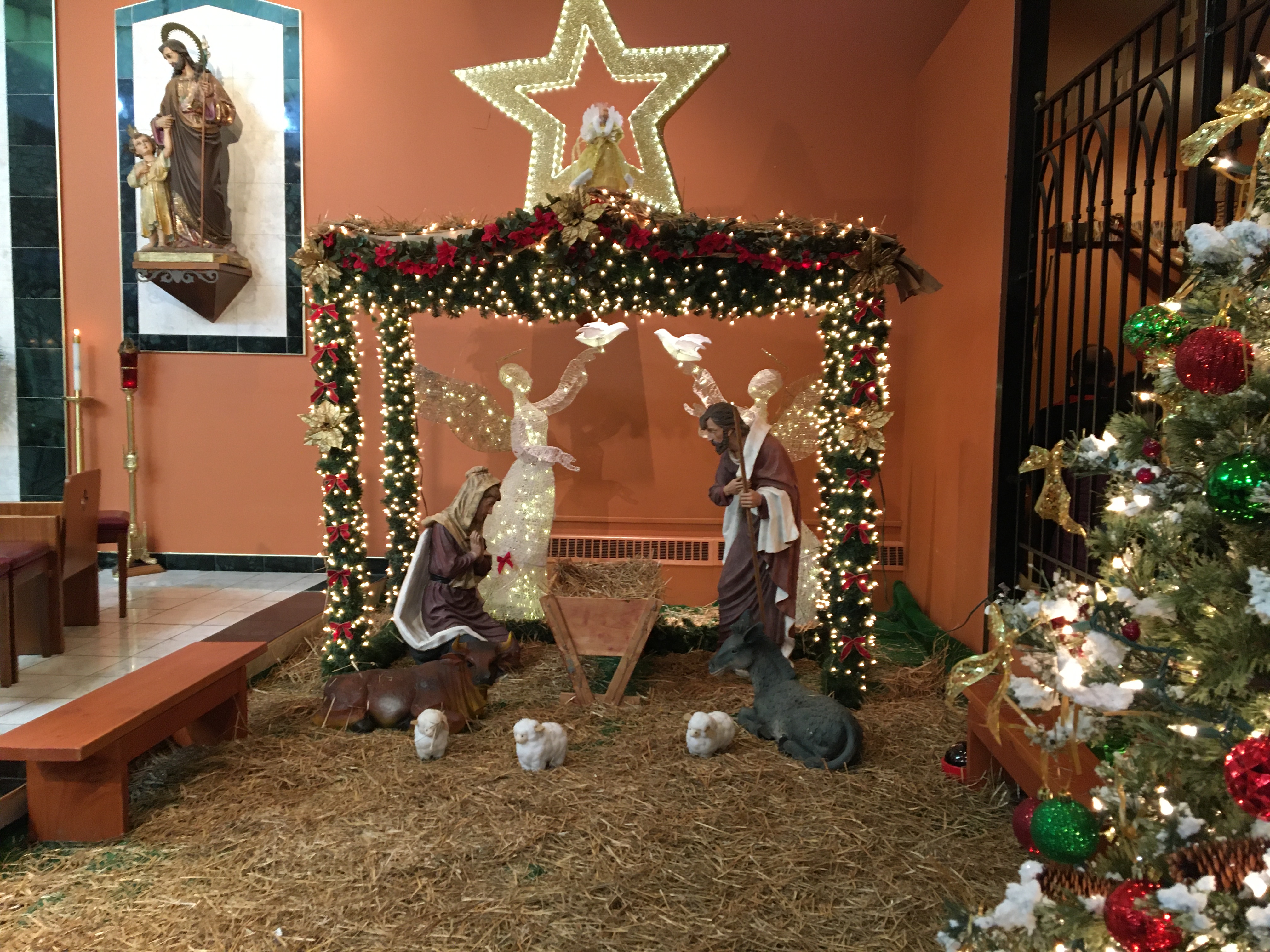 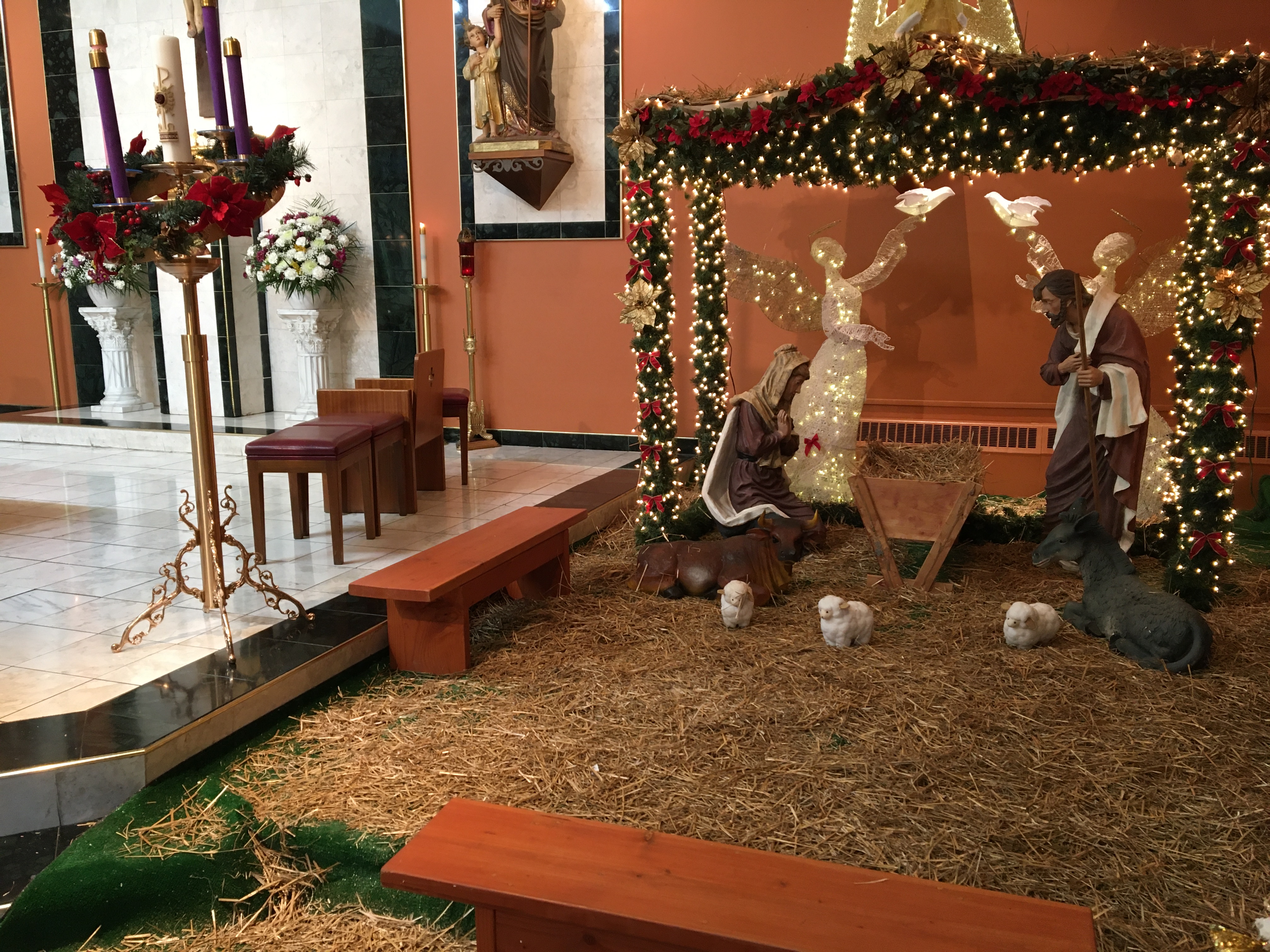 View leaving the church after an 8am mass in December, cemetery gates open and a car-filled Morris St. 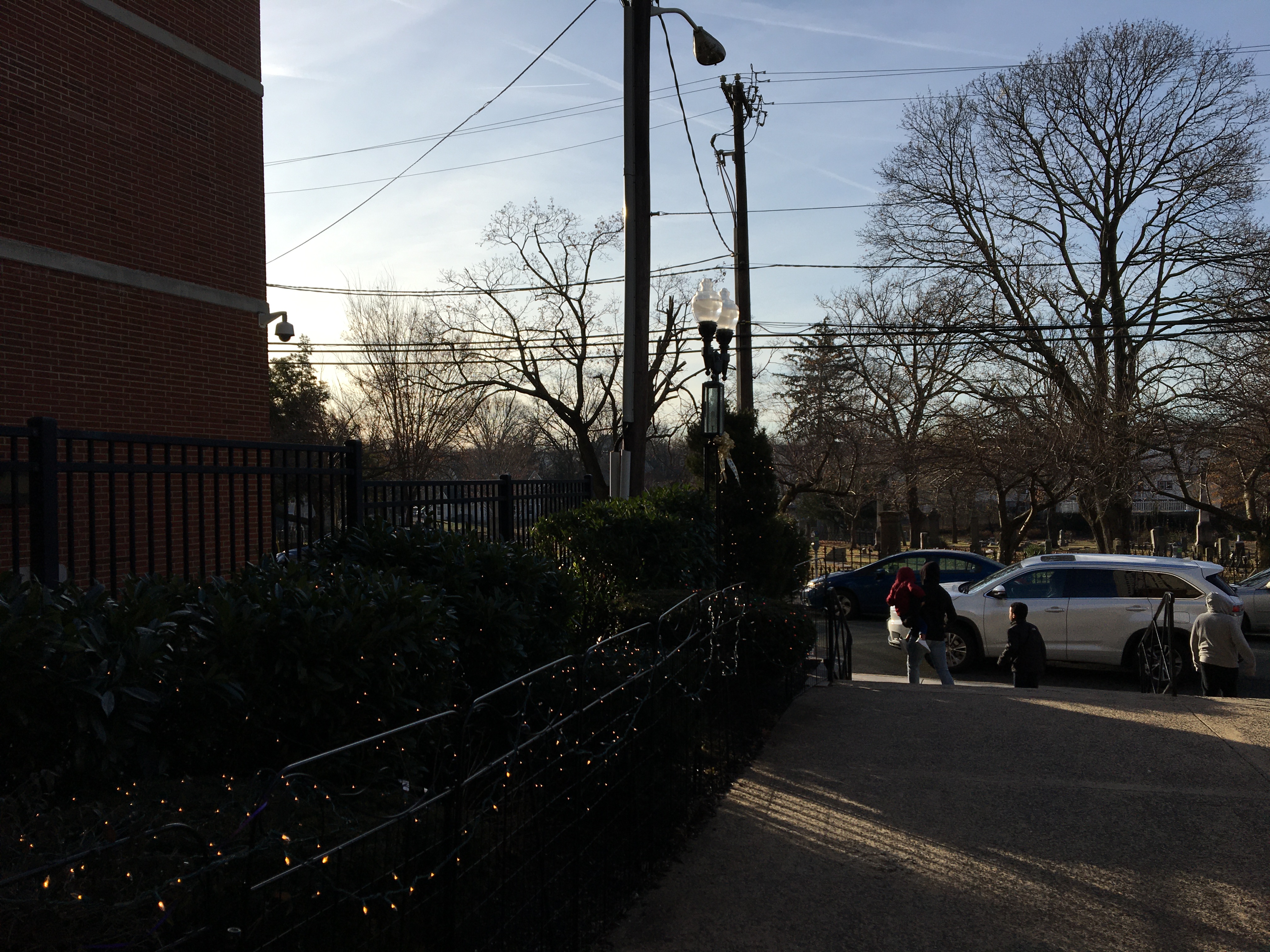 Front lawn of church decorated with Christmas lights and ornaments; off to the left a man selling Mexican sweet bread (pan dulce mexicano) from a carrito 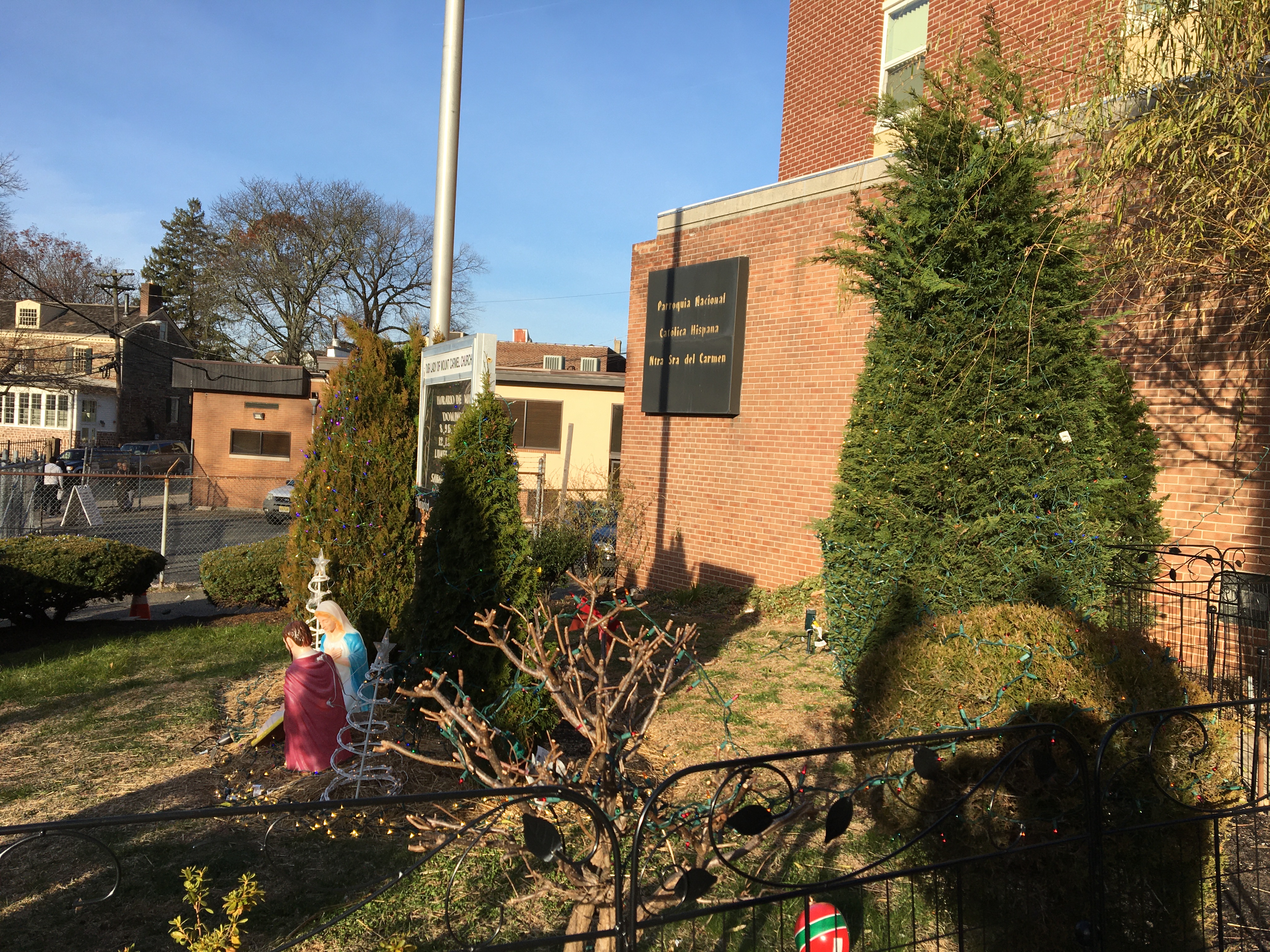 Front lawn view, more Christmas lights on trees and bushes, manger set up, and poster with the words "Feliz Navidad" 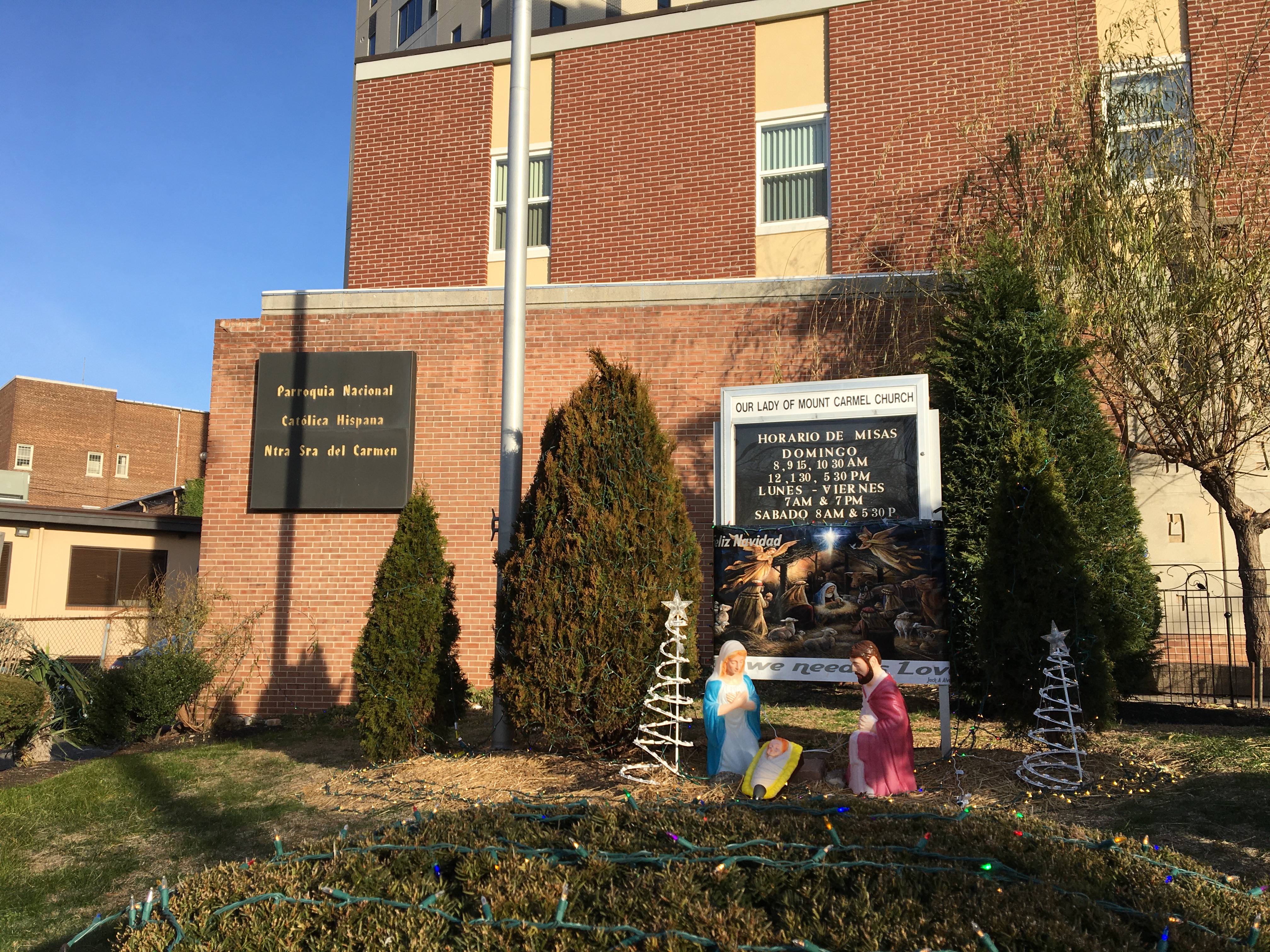 The presence of so many Hispanics in New Brunswick is accommodated in one regard by the culturally significant site, Parroquia Nuestra Señora del Carmen. Located in a city which is primarily known for its being the site of Rutgers University, this church exists unassumingly and serves to 3,000 families of New Brunswick (http://www.olmtcarmelonline.com/descripcion.html). It is a small building, with not much more space than about basketball court inside the actual church. The church stands between a small business and the rear side of a parking deck. It definitely is of humble means, and in that sense is reflective of the type of the people who worship there.

I find it valuable to note that the administration of the church is completely Hispanic, which is very unique because the large majority of catholic churches in the U.S. that do have Hispanic services are at best only partially run by Hispanics. The Catholic church and its traditions are of large cultural importance to many Hispanics in the United States. This church is likely one of its kind, because “its liturgy is completely in Spanish” (Rabinowitz). As religion is an important part of Hispanic culture, this site provides a place that makes many of its parishioners feel as if they were in their native countries.

In addition to being a house of worship and prayer, Parroquia Nuestra Señora del Carmen is a place where families gather, friends catch up, and kids meet and play with other kids from the community. It undoubtedly acts as a site of community gathering and community blossoming (Ospino). After mass, for example, there are often a couple of carrito vendors, selling churros and pan dulce mexicano. Even when the vendors are not selling much food, the passersby and mass-goers greet them and sometimes chat for a little bit. There's also someone from the church who helps direct traffic along Morris Street. The church's community gathering and blossoming often comes in the form of the country specific masses and celebrations that are held on particular Holy days or Feast days. I heard the priest make an announcement at the end of mass about there being a get together and mass for the patron saint of Nicaragua later today and a get together and special midnight mass next week for Nuestra Señora de Guadalupe, a very important symbol of Mexican Catholics. Another notable aspect of the sense of community produced at and through Nuestra Señora is the choir. There is a kids choir, who does the music at the 9:15am mass. The contribution of these young people to the church creates a feeling of youthfulness among the the members of this community and frequently leaves them with smiles on their faces as they sing along to the songs.

As it has arguably been for the past 40+ years, Our Lady of Mount Carmel RC Church / Parroquia Nuestra Señora del Carmen continues to be an important cultural site to many Hispanics in New Brunswick.