Built around 1770, the James Semple or Randolph-Semple House follows the Classical Revival style. It is an example of Palladio's Roman Country House adapted as a wooden-framed building. Though it has not been proven, some ascribe the design of the house to Thomas Jefferson, who lived in Williamsburg during the period of the house's construction and whose drawings of the house at Monticello are very similar to this one. The Colonial Williamsburg Foundation acquired the building and restored it in 1932, repairing dilapidated structures and removing a wing added in the nineteenth century. It became a National Historic Landmark in 1970, and the National Register of Historic Places recognized it for its architectural significance in 1974. 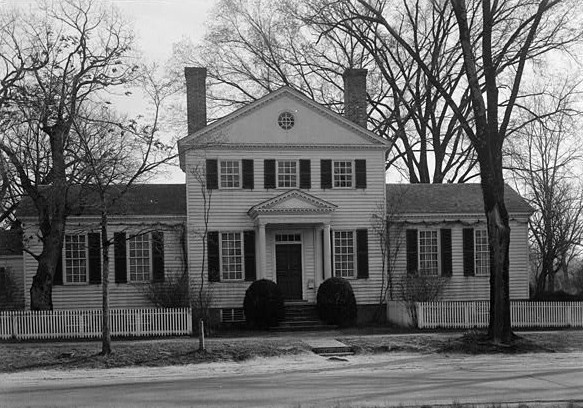 The house was built for Colonel William Finnie, who served as quartermaster general of the Southern Department during the American Revolution. Judge and College of William and Mary professor of law James Semple purchased the house in 1800. Future tenth president of the United States John Tyler (1790-1862), who was related to the Semples, lived here when he was a student at the College of William and Mary from 1802 to 1807.

The house is a framed structure with exterior clapboarding, consisting of a two-story center section flanked by one-story wings. It sits on the south side of Francis Street on the eastern end of Williamsburg, between Blair Street and Waller Street. The center section of the house features two chimneys and a pedimented gable roof. The two single-story wings also have gable roofs. The Classical Revival style of the house also invokes the Palladian style, and is an example of tripartite houses built throughout the South in the early American republic.

Originally the center section contained a large salon with fireplace, which during the nineteenth century was divided into smaller spaces. The east wing served as a dining room and the west wing as a drawing room. Behind the east chimney is a winding staircase similar to the staircase at Monticello, which reaches the two bedrooms on the upper story of the center wing.

During the nineteenth century, the house had several owners. The Colonial Williamsburg Foundation acquired it in 1932, one of its first acquisitions. The foundation restored the house by rebuilding the chimney and front steps, removing a wing dating to the early nineteenth century, and replacing other altered details.