In 1775, in response to the Battles of Lexington and Concord, the Continental Congress established the Continental Army under George Washington and called for companies of militiamen. They called for two company from Virginia, which were quickly formed at Shepherdstown and Winchester. The Shepherdstown company was organized under Hugh Stephenson in June 1775. Before departing, Colonel William Morgan of Springdale held a patriotic barbeque for the men. On July 17, 1775 Stephenson's company met at Morgan's Spring and marched 600 miles in 24 days to join Washington's forces at Boston. This monument was erected in 1932 by the Daughters of the American Revolution to commemorate the "Beeline March."

1932 DAR Marker for the Beeline March 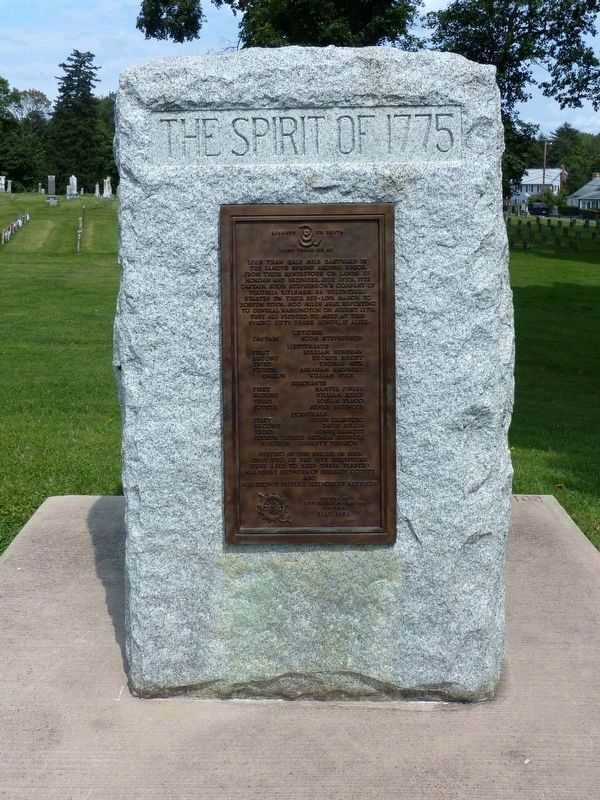 Historical Marker about the Beeline March 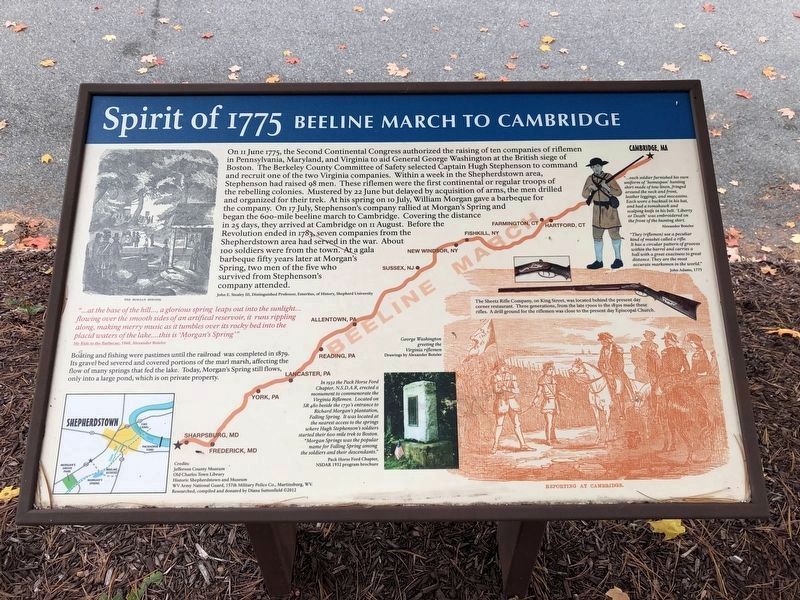 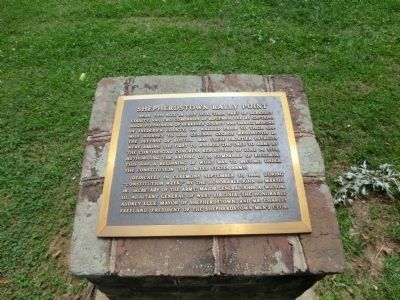 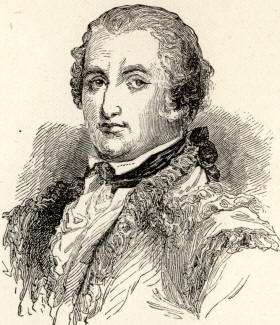 During the last half of the eighteenth century, British actions relating to the frontier region of their North American Colonies fostered the development of a collective American identity within those colonies. At the outset of the French and Indian War, colonial assemblies were asked to supply troops for the defense of the Empire. An Empire that was in part represented by their sister colonies. British commanders rejected colonial advice regarding the development of Native allies and dismissed Native overtures toward assistance against the French. British officials came to dismiss colonial participation in the effort, concerning not only the global war but also the North American theater. For many colonists the war’s outcome was troubling. Colonists who, considered themselves Englishmen, assisted the Empire in acquiring great lands, lands to which the Crown restricted their access. The Proclamation Line of 1763 was not well received in the colonies. British leaders continued to provoke the anger of many colonists over the next twelve years. A serious of attempts failed to establish British tighter control of the colonies. To the colonies, British political reactions to the French and Indian War were an attempt to render them as subjects, not as citizens. Eventually these acts moved the various colonies to act together to resist British efforts.

In 1775, as the Continental Congress still tried to negotiate with Parliament and the King, the first military engagement of the Revolution occurred. The Battles of Lexington and Concord on April 19, 1775 sparked a movement of colonial militia men towards Boston where the British forces were centered. Even though war was not yet officially declared, the news of armed conflict was passed rapidly through the colonies by resistance organizations and newspapers. According to local historian Danske Dandridge, news of Lexington and Concord reached Shepherdstown (then called Mecklenburg, VA) on May 10 and men began drilling in town in preparation. Even before the news of Lexington and Concord reached western Virginia, members of the local militia were mobilized within the state. On April 21, 1775 Virginia’s governor Lord Dunmore ordered fifteen barrels of gunpowder removed from the magazine at Williamsburg, the state’s capital. This was done by British sailors in the middle of the night and, like the events near Boston, enraged local citizens. News of this reached Shepherdstown before news of the events in Lexington and Concord, and Michael Bedinger wrote after the war that he and George Morgan marched to Fredericksburg to join militia forces there, but returned home after the gunpowder issue was resolved on May 3.

On June 14, 1775, the Continental Congress approved the establishment of the Continental Army and commissioned George Washington as Commander in Chief a few days later. Congress called for two companies of 100 men from Virginia for one year of service. Within a week two companies were recruited, one by Hugh Stephenson at Shepherdstown and one by Daniel Morgan in Winchester. Prior to the men’s departure, Colonel William Morgan hosted Stephenson’s men for a patriotic barbeque on his property. On July 17, 1775 Stephenson’s company met at Morgan’s Spring (at Falling Spring) and departed for the 600-mile march to Boston. Dressed in home-made frontier clothing, with buck tails tied to their hats, and moccasins on their feet these men were the symbols of the colonial frontier. Each man was outfitted with a new long-rifle made by Shepherdstown gunsmiths Henry and Philip Sheetz. The two Virginia companies were scheduled to meet at Frederick to march together the rest of the way; however, Morgan decided not to wait for Stephenson, creating a bit of a race to be the first to Boston. As Stephenson’s men attempted to catch and pass Morgan, their feat became known as the Bee-Line March to Cambridge. These men covered 600 miles in 24 days arriving at Cambridge on Friday August 11, 1775. According to the journal of Henry Bedinger, George Washington and General Gates reviewed the company upon its arrival. Hugh Stephenson was promoted to rank of Colonel and died of an illness in 1776. Command of the regiment was given to Colonel Rawlings. On November 16, 1776, the regiment was captured at Fort Washington. The unit, including Henry Bedinger, was imprisoned for nearly four years.

Over the course of the Revolution Mecklenburg (now Shepherdstown) raised seven companies to fight in the war. In June 1825 Daniel Morgan (not related to the Daniel Morgan who mustered the 1775 Winchester company) hosted a fifty year reunion for Stephenson’s men at Poplar Grove. Only five of the original company were still living, and only two (Henry and Michael Bedinger) made it to the reunion. A few other veterans of the Revolution also attended the event.

In 1932 the Pack Horse Ford Chapter of the Daughters of the American Revolution erected a monument to commemorate the 1775 Beeline March and the 1825 Reunion. Originally the stone monument was erected on Route 480 besides the original entrance to Richard Morgan’s Falling Spring. In 2012, the monument was moved to a safer location just inside the entrance of Elmwood Cemetery and rededicated by the same chapter of the D.A.R. This marker is included as part of the Morgan’s Grove Historic District on the National Register of Historic Places.

There is a second monument commemorating the Beeline March located in Morgan’s Grove Park less than a mile down Route 480. This was dedicated in 1988 by the Secretary of the Army.

"The Beeline March: The Journey to Cambridge & the Birth of the United States Army." The Jefferson County Historic Landmarks Commission. Accessed October 22, 2020. http://jeffersoncountyhlc.org/wp-content/uploads/2018/11/FINAL_JCHLC_BeelineMarch_Brochure_PRINT_Nov5.pdf.