Biederstaedt Grocery stands in a neighborhood that was occupied by many German immigrants beginning in the 1850s. The brick building at 851-853 Williamson Street was built by Charles Biederstaedt in 1874, to replace a wood frame building that burned down. Biederstaedt operated both his grocery business from the corner/ east half (853) and a saloon on the west half (851). George C. Breitenbach bought the building in 1891 and moved his family into the second floor residence; the family lived there until 1951. The Biederstadts built a new house next door at 847 Williamson in 1890 and moved there. The 853 corner space continued to contain a grocery store until 1960. Biederstaedt Grocery became a Madison Landmark in 1977 and was listed in the National Register of Historic Places in 1982. Only nine corner grocery stores from the nineteenth century remained in Madison by 1977. The first floor continues to contain businesses.

Front of Biederstaedt Grocery in 2009 photo by James Steakley 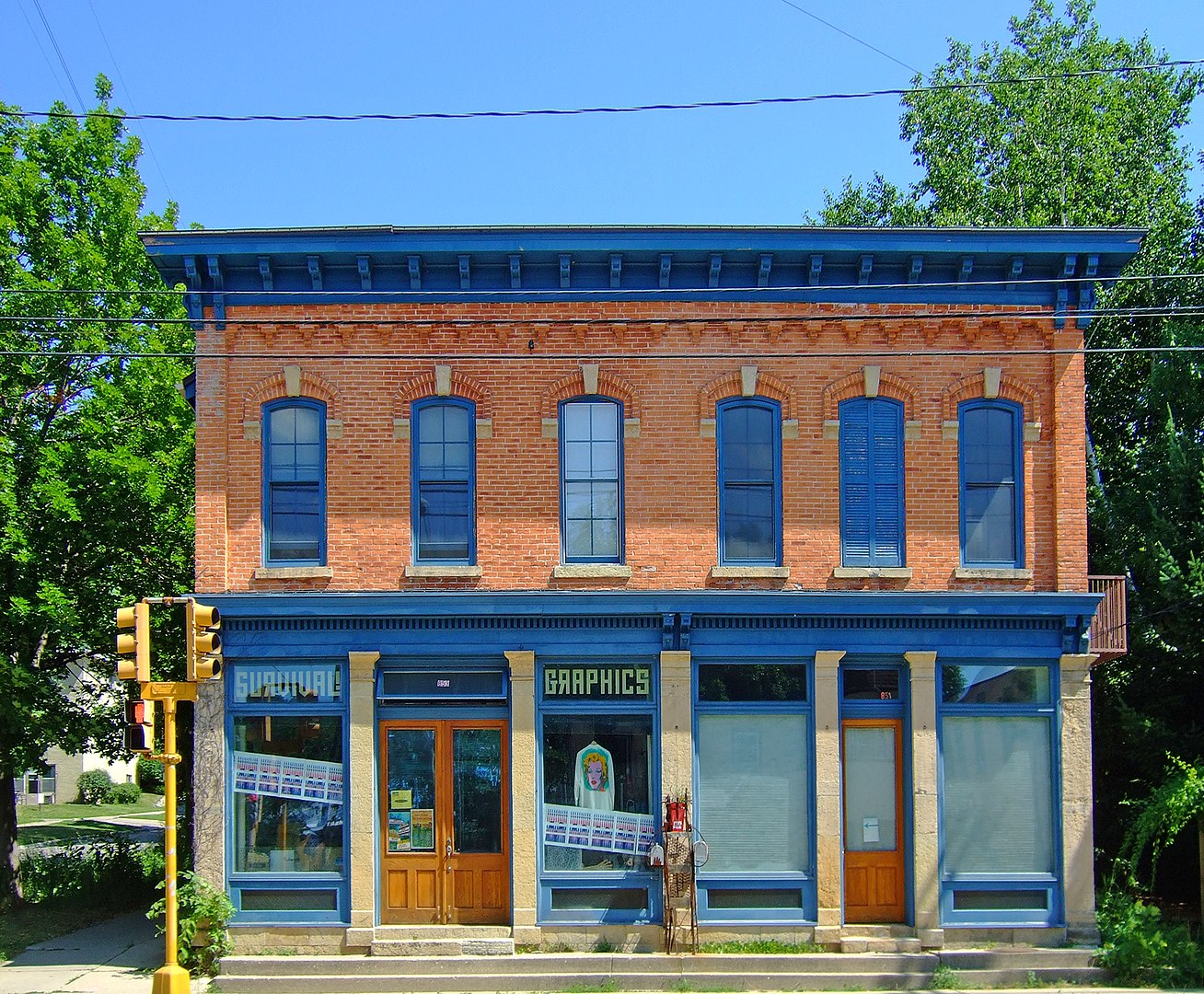 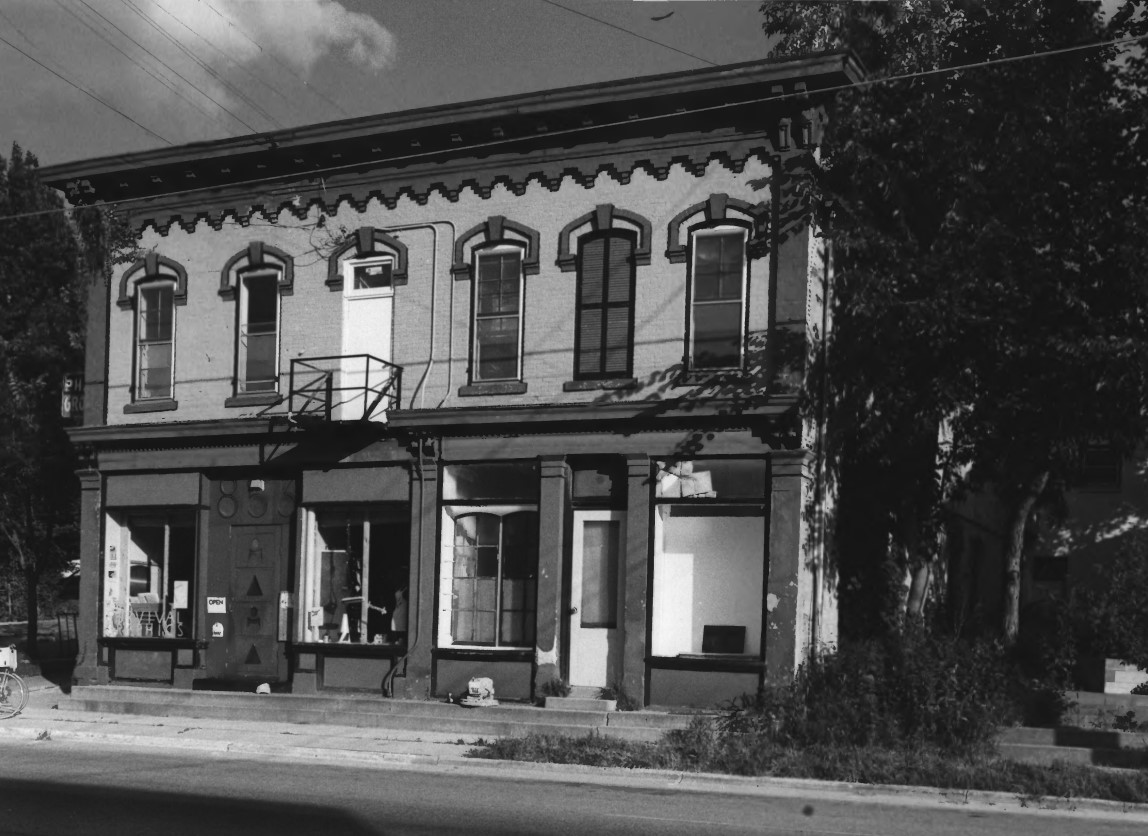 Madison Landmarks Commission Plaque on side of Biederstaedt Grocery (Steakley 2009) 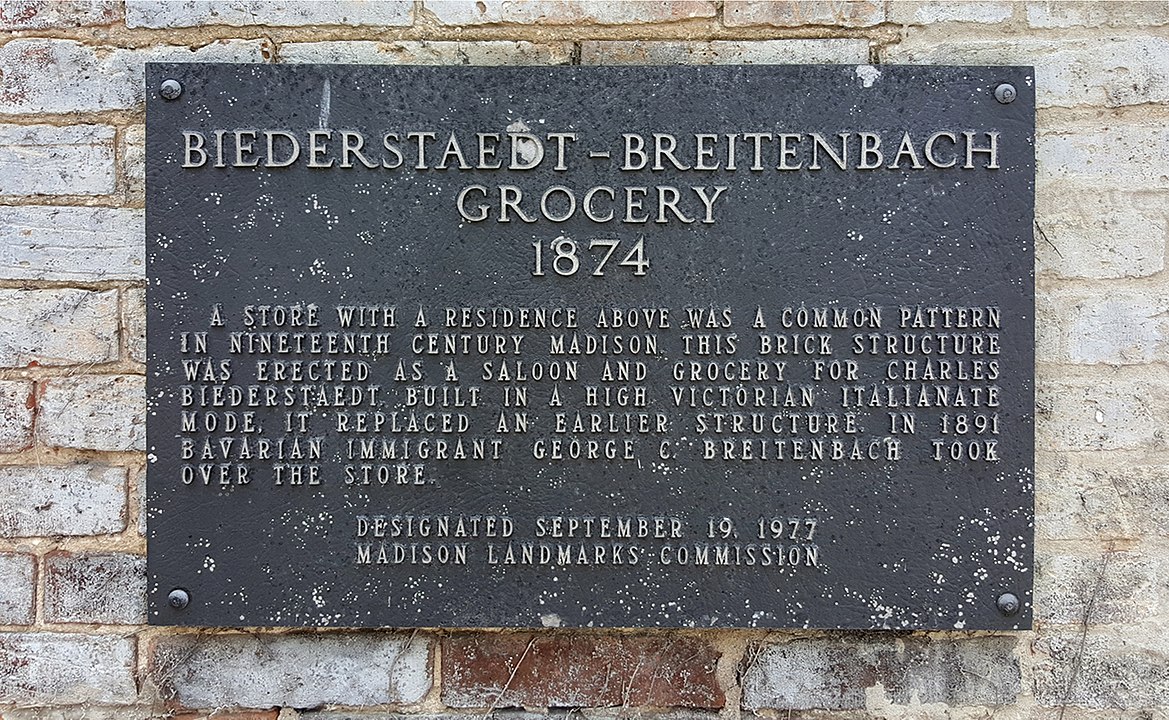 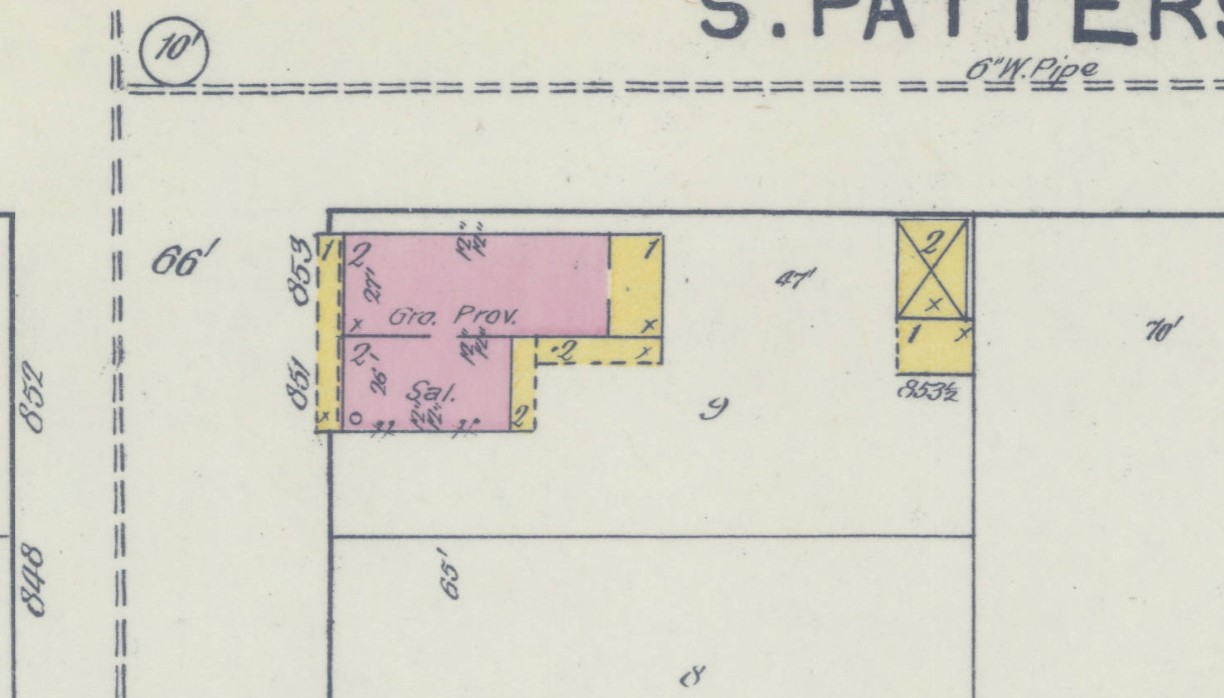 The neighborhood was German-speaking in the nineteenth century, The corner of Williamson and Patterson was the site of a wood frame store built by Otto Hinrichs in the late 1850s to hold his dry goods and grocery store. Charles F. Biederstaedt bought the property in 1866; he and his wife, Anna lived in Ward 3 of Madison in 1870. Charles F. (age 35), a native of Prussia listed his occupation as grocer and dry goods retail. Charles owned real estate valued at $3,000 and $1,500 of personal property. Anna (25) was born in Prussia. All three of the children living with them in 1870 had been born in Wisconsin: Edward (age 7), Pauline (3) and Oscar (2). A 22-year-old store clerk and native of Saxony, Henry Smith, completed the household.

Charles F. Biederstaedt continued the business until 1874, when he leased the space to Martin Joachim, who had been a clerk in other grocery stores. A fire in August 1874 started in Hyer's Hotel next door and destroyed both the frame wing of the hotel and Biederstaedt's building. Shortly afterwards, Biederstaedt built the brick, two-part commercial building that still stands. Biederstaedt Grocery supplied dry goods, food and liquor. The store became a community gathering place. By 1885, Charles Biederstadt operated retail stores from both commercial spaces (851 and 853 Williamson). Upstairs from the commercial spaces were residences; the Biederstadt family occupied one of them.

The Breitenbach family of merchants was associated with the store from the early 1890s into the twentieth century. The Breitenbachs hailed from Bavaria and previously lived in Rochester, New York and Milwaukee, Wisconsin before relocating to Madison in 1850. George C. Breitenbach bought the store in 1891; he had married Bertha Mayer, the daughter of Casper Mayer, a proprietor of a local saloon and restaurant. The couple had fourteen children; the oldest child was George H. Breitenbach. Prior to buying the grocery store, George C. operated a wagonmaking business and later was a plowmaker and woodworker at Fuller and Johnson. The grocery store business became "George C. Breitenbach and Son." George C. (56) and his family lived upstairs from the grocery store at 853 Williamson in 1900: wife Elizabeth (53), and 10 of the couple's 13 surviving children, ranging in age from 6 to 27. Two of the daughters were clerks in the grocery store: Amelia (25) and Bertha (23).

After selling the business to the Breitenbach's, the Breitenbachs moved next door to a house they had just had built at 847 Williamson; the widowed Anna Biederstadt (55) shared the house in 1900 with three of her five surviving children: Pauline (32, a dressmaker), Walter (23, a barber) and Otto (21, a printer).

The Italianate building at 851-853 is constructed of red, locally-made brick with sandstone trim. The front (north) facade has a straight parapet rising above a low-sloped gable roof to the east and a shed roof to the west. The parapet cornice is wood with decorative brackets. The six second-floor windows have segmentally arched brick tops with stone keystones, louvered shutters, and stone sills. The original first-floor storefront windows were changed from nine-light to plate glass topped by transoms in the early twentieth century. An original roof structure on iron brackets over the storefronts was removed long ago. One of the windows above the 1853 storefront was converted into a door by 1980, leading to a metal balcony/ fire escape; this has since been restored back to a window and the fire escape has been removed.

On the 1892 Sanborn map, the northern half of the ground floor was the grocery store in 1892 and the smaller, southern half was a saloon. A two-story addition to the rear of the saloon was added in 1897. When the building was documented in 1981 for National Register eligibility, a neon sign from a former business (Pharo Grocery) was on the east facade, facing Paterson St., with a billboard over a painted sign advertising King Midas Flour. A second-story window nearest Williamson Street on the west facade was changed into a door around the late twentieth century, leading to a metal fire escape. The interiors of the commercial portions of the buildings have been altered many times, but rehabilitation in the 1980s attempted to preserve the existing maple flooring, waist-high wainscoating on side walls, and other historic features.