Among the greenery of Plaza Ferdinand VII, named after King Ferdinand VII of Spain, multiple historic gatherings have taken place here over its time as a public space. This plaza has hosted various events, some that have brought Pensacola together and some that were extremely divisive. In 1821, Spanish and American soldiers, along with Andrew Jackson, gathered for a ceremony marking the official transfer of Florida to the United States. On an ordinary day, people would go to play friendly games of horseshoes in the plaza to enjoy their time there. Tragedy also occurred in the plaza as mobs lynched Leander Shaw and David Alexander in the plaza in 1908 and 1909 respectively, showing the dark side of its history and the division it created.

The bust of Andrew Jackson in Plaza Ferdinand today. 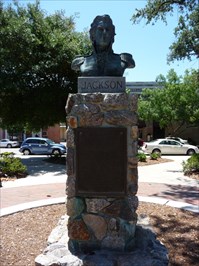 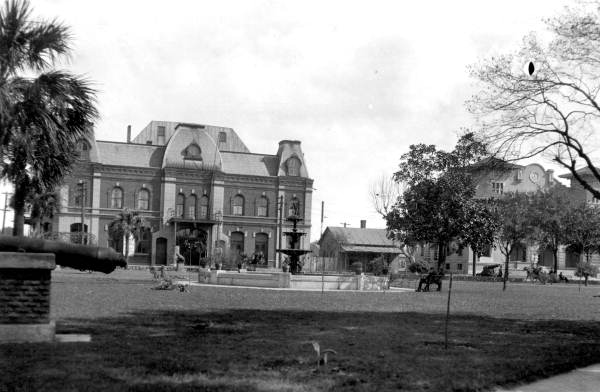 Jars to be filled with dirt at the Plaza Ferdinand lynching commemoration. 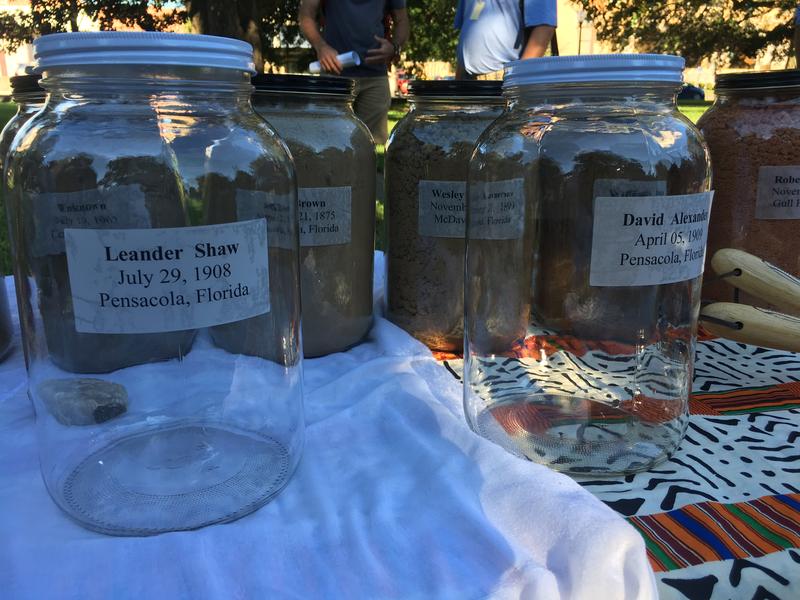 Plaza Ferdinand was the site of the Transfer of Florida from Spain to the United States. This took place on July 17, 1821. The transfer resulted from the Adams-Onis Treaty of July 22, 1819, in which Spain agreed to cede East and West Florida to the United States. After a long delay, Spain signed the treaty on February 21, 1821. Andrew Jackson, still a general at this time, was appointed as governor of the new territories. Jackson attended the official transfer ceremony at this site, along with the Spanish governor. The ceremony included the US Fourth Infantry Band playing the Star-Spangled Banner while soldiers lowered the Spanish flag, and raised the American flag to both be at half-staff. The USS Hornet performed a 21-gun salute from Pensacola Bay as the soldiers fully lowered Spanish flag and raised the US flag to full staff. Jackson officially declared Florida as a territory following the ceremony. A bust of Andrew Jackson now sits in the plaza as a monument to commemorate the transfer. Today, some people view the bust as a symbol of pride and others as a symbol of division and hate given Jackson’s full history.

There is also a tragic history that occurred at this site in the early twentieth century in the form of mob lynchings. Late in the night and early morning of July 29-30, 1908, Leander A. Shaw, an African American man, was lynched from a light pole in Plaza Ferdinand. Police arrested Shaw for the assault of Lillie Davis, a 21-year-old white woman. As word spread, an angry and violent mob stormed the jail. Sheriff James Van Pelt talked and pleaded with the mob to disperse and threatened to shoot anyone who entered. The mob broke down the gate, and deputies fired, killing one and injuring others, but they became overpowered. Shaw was taken down the streets and hanged from the light pole in the plaza. Soon after, he was shot more than 500 times for over five minutes. A crowd of over 1000 people gathered there to witness what happened. Newspaper reports say that this was the first lynching to occur in Plaza Ferdinand.

A year later, April 5, 1909, David Alexander was taken from the jail and lynched on a light pole in the plaza. Police arrested Alexander, accusing him of killing a white police officer, R.J. Carter. Reports say the kidnapping and lynching happened at around 4 p.m. that day. Two group of masked men entered the jail, surprising officers. The groups of men forced officers to the floor, and then took Alexander from jail. The group drug Alexander to the plaza, then hanged and shot him fifteen times. The groups worked quietly to avoid detection and chose a quiet time of day to commit these actions. Local police and the governor’s office investigated the lynchings.

Both of these murders are a reminder that history is not always a pleasant one. While people gathered for good times, these events show that there were some bad times. More recently, on September 20, 2018, a ceremony was held at Plaza Ferdinand in memory of both Shaw and Alexander. Dirt from each of the sites were collected in jars to be sent to the National Monument for Peace and Justice in Montgomery, Alabama. Shaw and Alexander are viewed by some groups as criminal and do not think they should be celebrated, creating division among the community still today.

Happier times also took place in the plaza. On March 2, 1922, the Pensacola Journal wrote a short article on larger gatherings of people playing “barnyard golf” in the plaza. Barnyard golf is a term used for the game now known as horseshoes. Every day, people would come to the plaza to smoke, read newspapers, and play or watch a game of horseshoes with each other. Playing horseshoes was more popular the winter visitors from northern states at first, but the locals eventually joined in on the games. The east side of the plaza had courts with benches lining the sides at this time where many people would get together to enjoy their afternoons in sport.

People gathered in Plaza Ferdinand creating unity and division within the community. This site hosted historic events and continues to act as a public space where more people will come to create more history over time.