Members of the Ku Klux Klan stage a march prior to their cross burning ceremony on Saturday, May 24, 1975, in Pensacola. The group, numbering about 135, staged the silent, peaceful march on May 24, 1975, in an effort to bring townspeople to the meeting later at night. 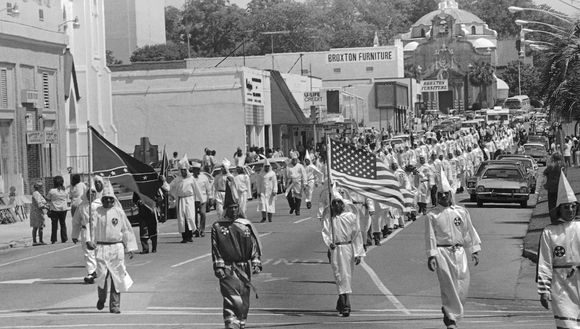 Members of the Ku Klux Klan march to Lee Square in downtown Pensacola on Saturday, May 24, 1975, in Pensacola. 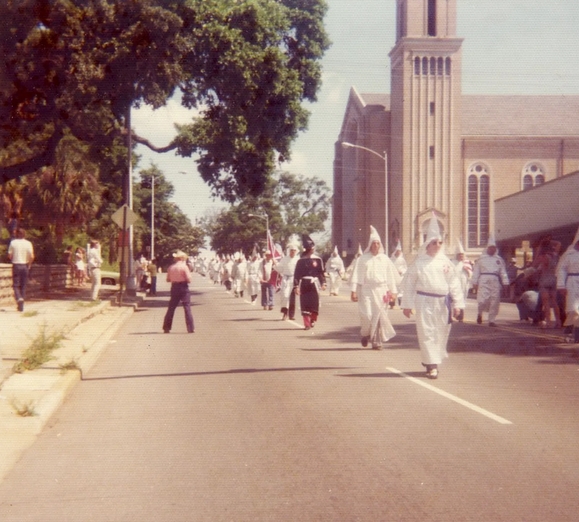 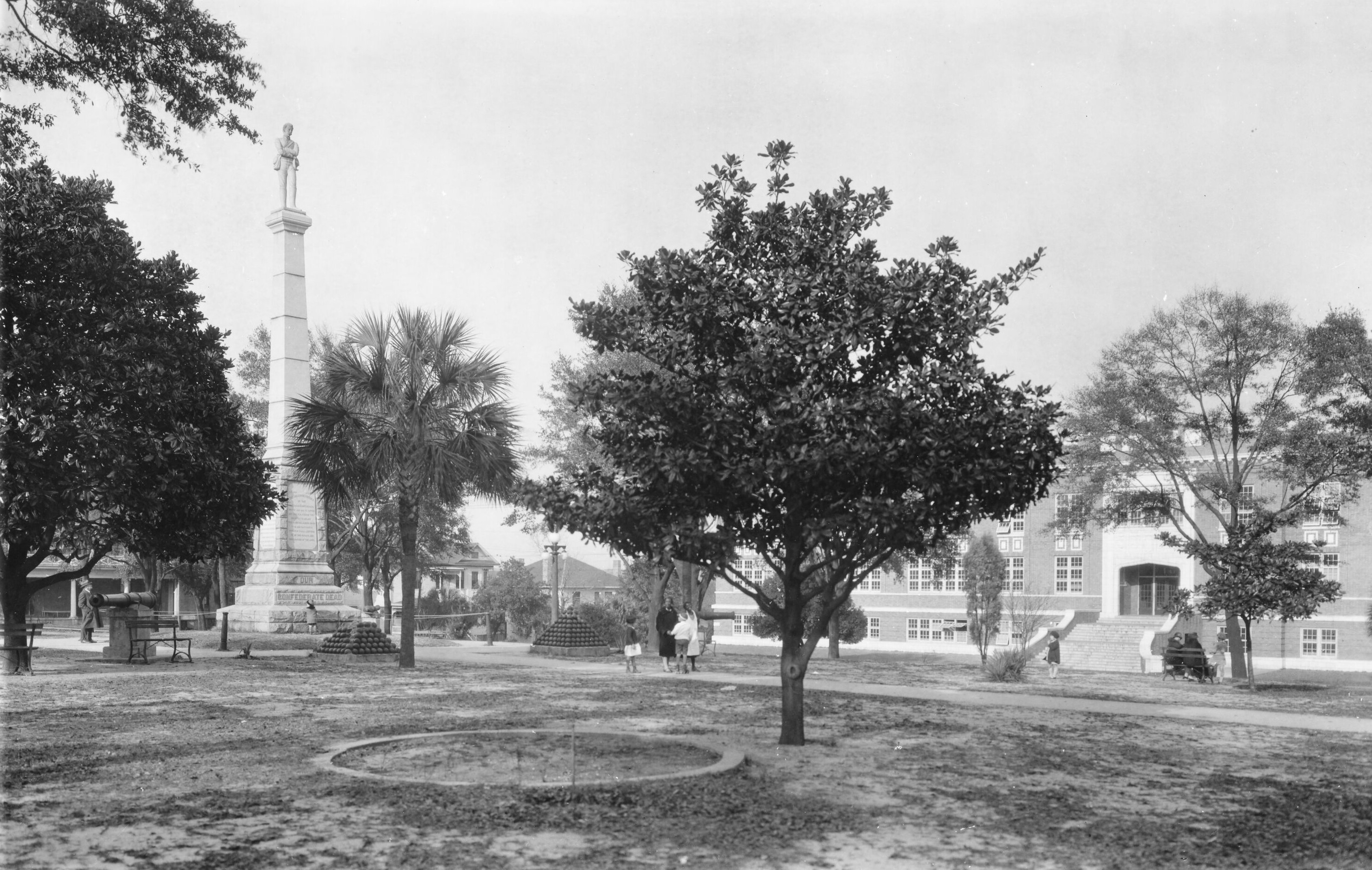 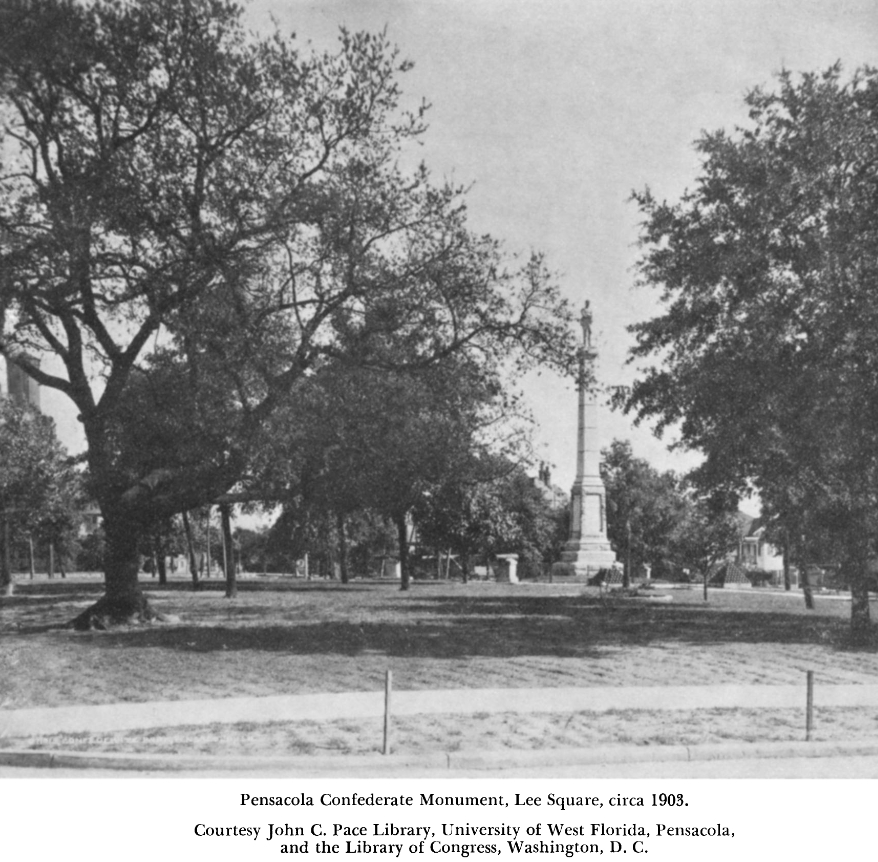 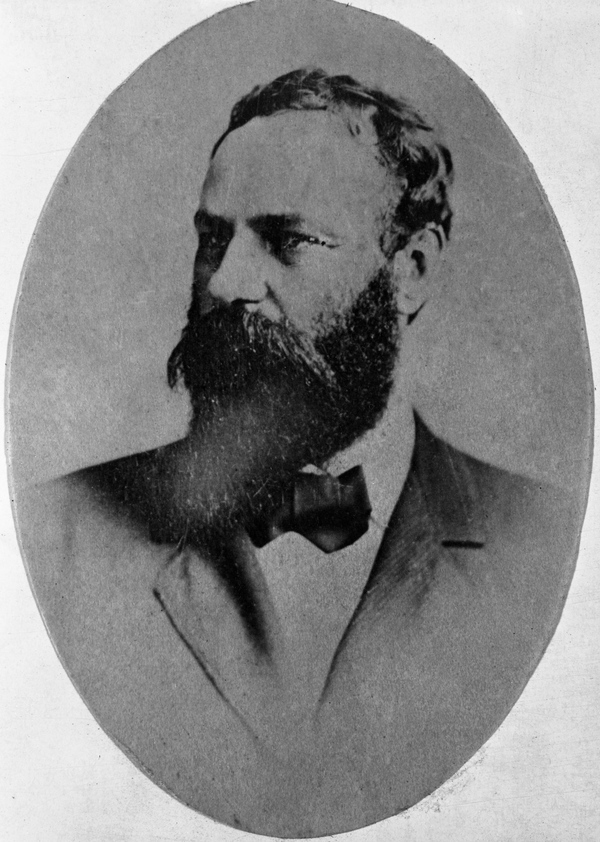 Thousands of ladies from the United Daughters of the Confederacy (UDC) gathered on June 16, 1891 to bear witness to the unboxing of a grand soldier figure that represented the Confederate Army. Many watched in awe as the statue was hoisted to the top of the towering marble obelisk in the grassy center-field of a public school Number 1 ground. The Ladies’ Association of Confederacy purchased 800 cannon balls and two old cannons that would decorate the park. Ceremonies and parades followed the next day to unveil the completion of the Lee Square Confederate monument. The parade featured more than seven different divisions [formations]. Each division consisted of Klans members from Knights of Prthias and Knights of Honor, fire departments, law firm associates, and other supporting societies.[2] After the parade was held down Palafox then brought back around to the top of the hill where the monument rested, crowds gathered around to hear the opening prayer by a local minister, Reverend H.S. Yeager. Considered the largest gathering of Confederate veterans in Florida, many came to visit and stood for a ‘retreat call’ in front of the finished landmark to show support for their fallen brethren.

Debate continued to flare over the monument site which was thought to be left standing “unaltered forever.” But in 1939 and 1963-1964 there were new issues rising with controversial reactions expressed about how the community felt.[3]  Letters were being sent to the Pensacola Journal during 1939 with reactions about the controversy. Many of who shared the idea of either wanting the monument destroyed or protecting it. As disagreements augmented, the Confederate Monument Association was revived in 1963 under the leadership of Mary Turner Rule. Rule and other community leaders had the idea to “enhance” the beautification of the square which would stop encroachments and threats to have the site removed.[4] Reconstruction of the area occurred as there were road modifications to reduce size of vehicular traffic and expand the park. This reshaped the area and the roadway to resemble a roundabout that can still be seen today.

Support for the monument only grew more intense throughout the years as the United Klans of America (UKA) would arrange two rallies on May 24, 1975. This marked their first public gather in Escambia County. The UKA planned to gather at the local Five Flags Speedway in the evening after they started the first march at 10 A.M from Lee Square to the Pensacola Municipal Auditorium, and ended near another memorial downtown. UKA imperial wizard, Robert Shelton, led approximately 135 robed Klansmen through downtown, waving Confederate flags as several Black groups observe from the sidewalks in silence. These rallies were meant to be used as a recruitment opportunity for Pensacolians, who have never seen a real Klan member.[5]  It just so happened that another march was being held by Alabama Governor George Wallace to speak about law and order. The two walked down the same route, only Wallace’s march ended at the Smith Bakery after passing the Lee Square monument.

During a time before women’s rights, there was an odd role being played by them over the construction of Confederate monuments. Women in Pensacola, Walton County, and Marianna developed ideas for the community in support of the monuments to “perpetuate the memory of the Confederate cause.” Author Stuart Towns states, “women were the prime movers of the Confederate monument building surge…they left their mark on their communities.”[6] Today, several local groups including the Sons of Confederate Veterans and Save Southern Heritage are suing the city to prevent the monument's removal. Local St. John's Cemetery, where many of Florida's Confederate veterans rest, has offered to take the monument should it be removed. As of October 26, 2020, the Pensacola Confederate monument has been removed by work crews. The statue will be transported to the Port of Pensacola as decisions will be made on where it will go next. The Pensacola City Council has voted 6-1 in July to change the name from Lee Square back to its original, Florida Square.[7]